I thought the best way to get most of his favorites on to his cake would be a picture.  I thought of sugar sheets but didn’t know how to get one made.  Then my mom sent me this link and I'd found the answer!  Frozen Butter cream transfer!

However, finding the right Avengers picture was a little more difficult.  You would think it would be easy to find a basic picture (like a coloring book page) but many still have too many details that wouldn’t transfer well with this technique.  I finally settled on a picture, but I had to clean it WAY up in Photoshop.  I just edited out many of the detail lines that would be too hard to transfer into a frosting picture.  There were two more characters and a cityscape behind them that I had to erase also.

Here’s the picture I ended up using after all my editing: 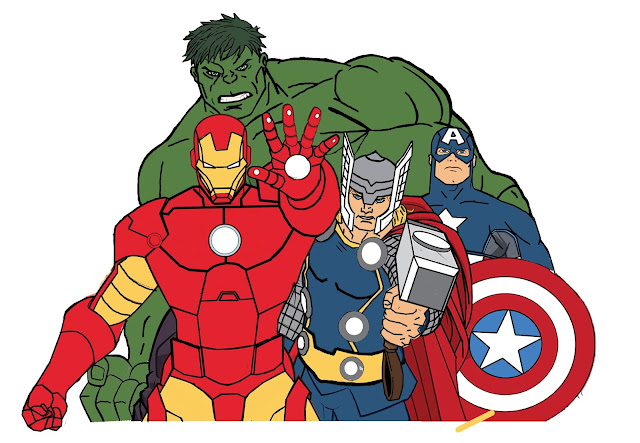 I wanted a picture in color to make it even easier.  Knowing what was supposed to be which color made the frosting of the transfer go much quicker.  After printing out this image in the size I wanted, I use a black sharpie to trace all the lines thicker.  This helped me edit out even more detail lines that were un-needed.

When you’re ready to start, you place this image under a sheet of wax paper and tape both securely to something hard.  I used a thick cutting board.  It has to be something that will fit in your freezer, too.  Lucky for me I have a chest freezer in the garage, so I didn’t have to worry too much about size.  Realize that the image will be a reverse when you flip it onto the cake, so if you do wording print a reverse image.

Then you start tracing the image. I bought a tube of Wilton black icing as recommended in the video clip.  My tips didn’t work on the tube, but I just put the frosting in a bag and used it like the rest of my frosting.  If you do something with this much detail, you most definitely will have to use a size 1 round cake decorating tip (smallest they have!) I used a 1 and a 3 for the entire transfer, but mostly it was easiest to use the 1.  If you can borrow a spare or buy 2 because with this many colors it’s a pain to wash and move the tip multiple times. 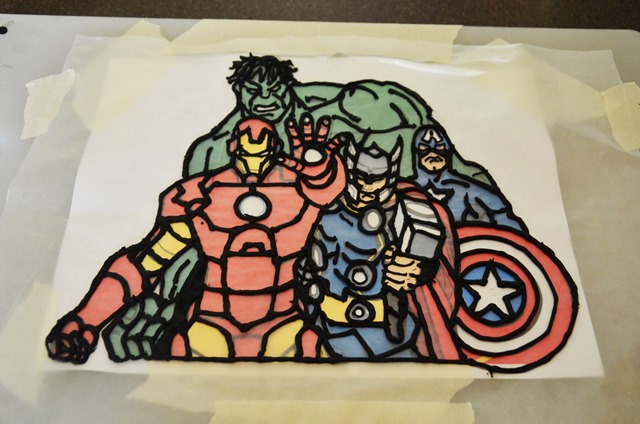 After the tracing of the main lines, I let it freeze overnight.

The next day I whipped up a batch of butter cream frosting.  I like this recipe, but I did 1/2 butter and 1/2 butter flavored shortening.  One batch was enough just for this transfer part.  I had to make another 2 batches to frost the rest of the cake!  This was a lot of different colors, so make sure to have enough frosting bags (you can buy a box of 12 disposable ones) and several couplers, too (i had 5 total). 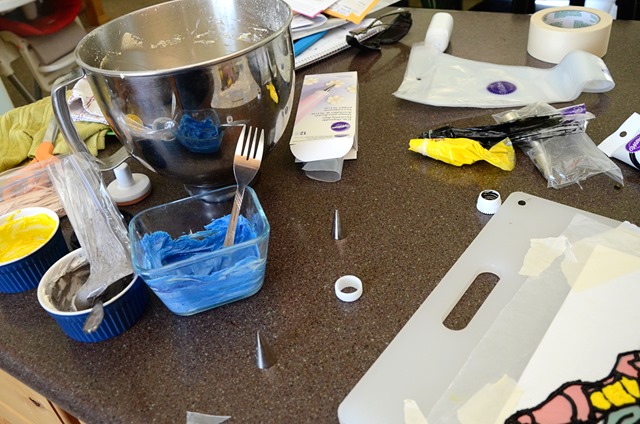 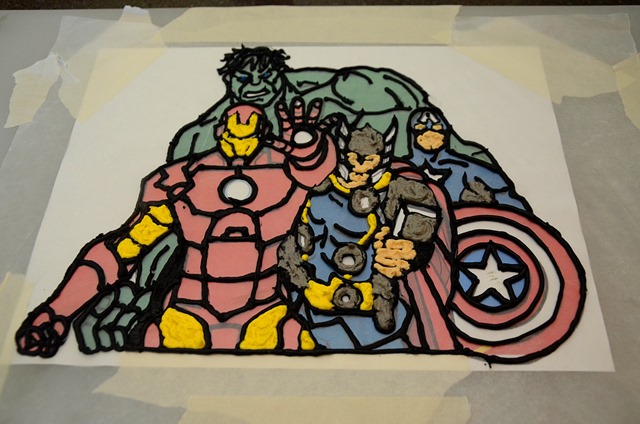 After you’ve colored everything, let it freeze again.  I let it freeze overnight again.
Then take the same color as the rest of the cake (in my case white) and created a really thick border around the entire edge. 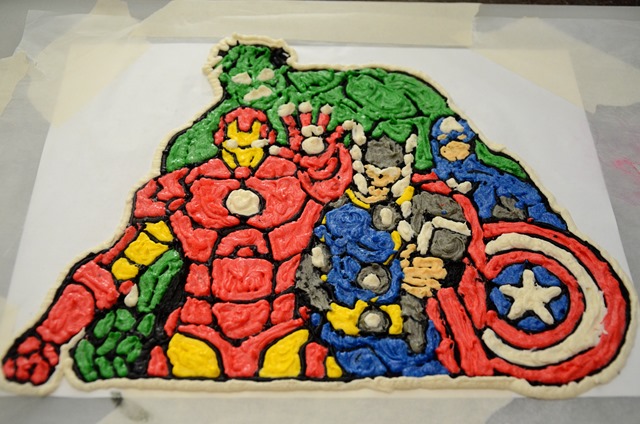 After that, cover the entire thing with a thick layer of that same color (no pic).  This will make the transfer nice and thick and it won’t break when you flip it onto your cake.  Let it freeze for a couple hours before flipping it.

Here is Luke’s finished Avenger Cake!  I love that Iron Man is kind of saying “5” because that’s how old Luke is on this birthday.  Those little dots on the picture is just condensation—it came out of the freezer and it’s the middle of July…

I filled in another border of white around the picture to fill in a bit of a crack that was there between the transfer and the cake itself. 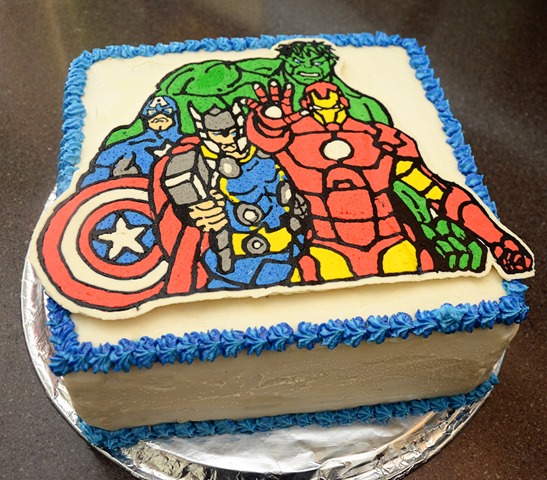 And I only freaked out a little when Hubby came in for a hug and nicked it with his elbow!  I just scraped it off and fixed it up and no one even knew but me!
(in this pic you can also see how i filled in the crack between the picture and the cake) 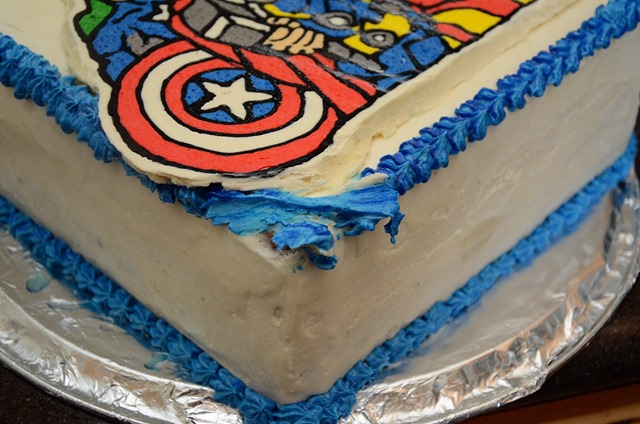 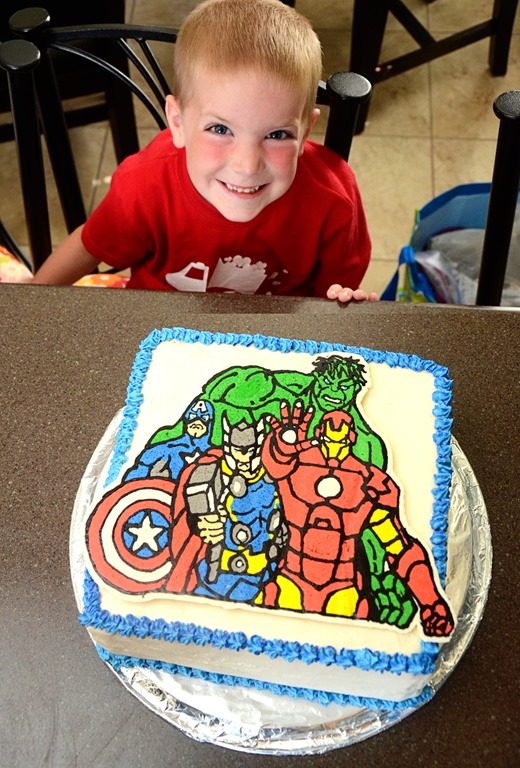