I always think the year between ages 1 and 2 goes the fastest!

Sam's been acting the part of a 2 year old for a while now--most of the day looked like this: 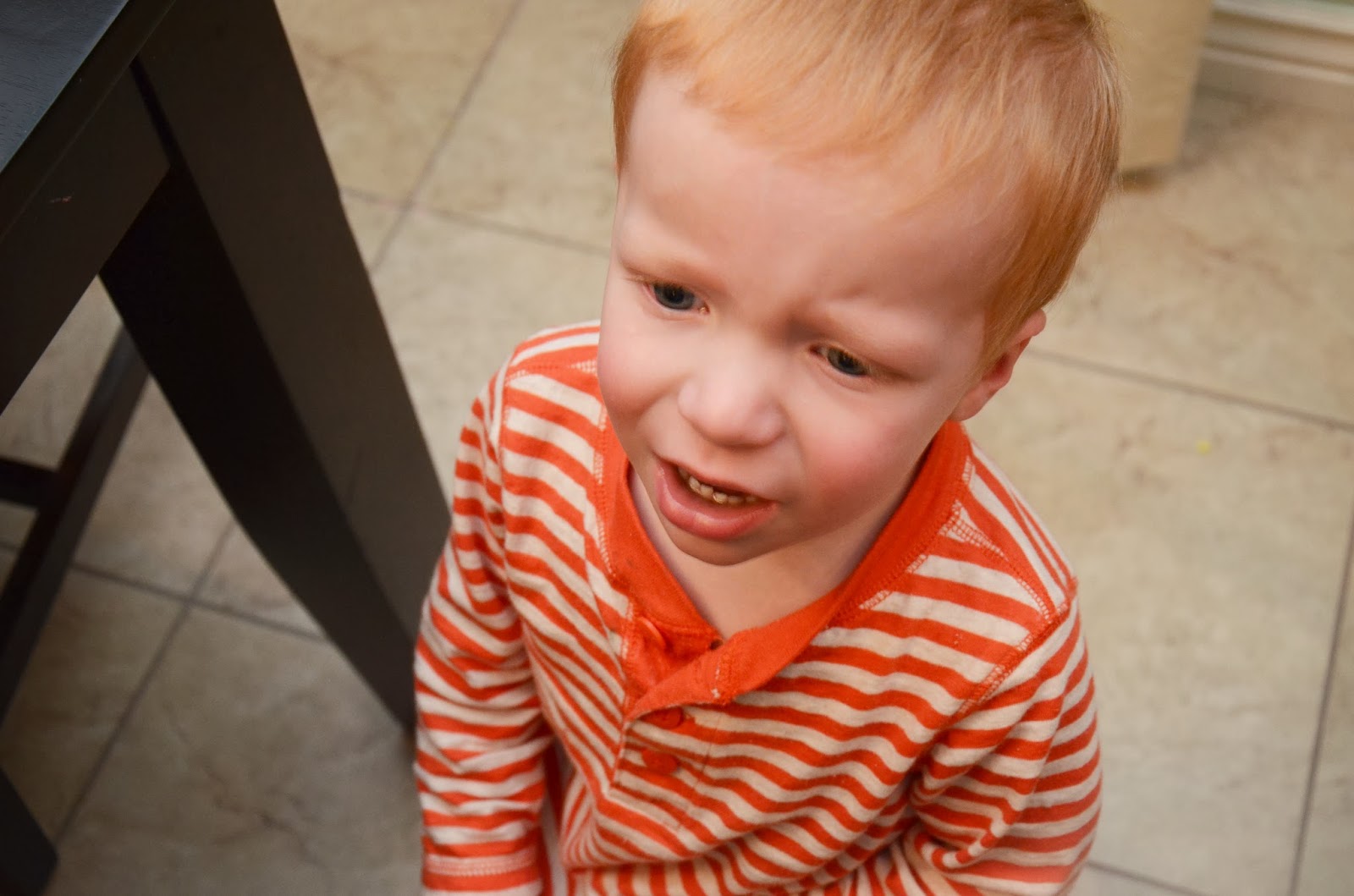 I wanted to make him an awesome cake but didn't want to eat it all ourselves so we invited all the cousins! They helped us put a nice big dent in that massive cake.

Speaking of cousins...it's pretty hard to get a good picture of 7 munchkins... 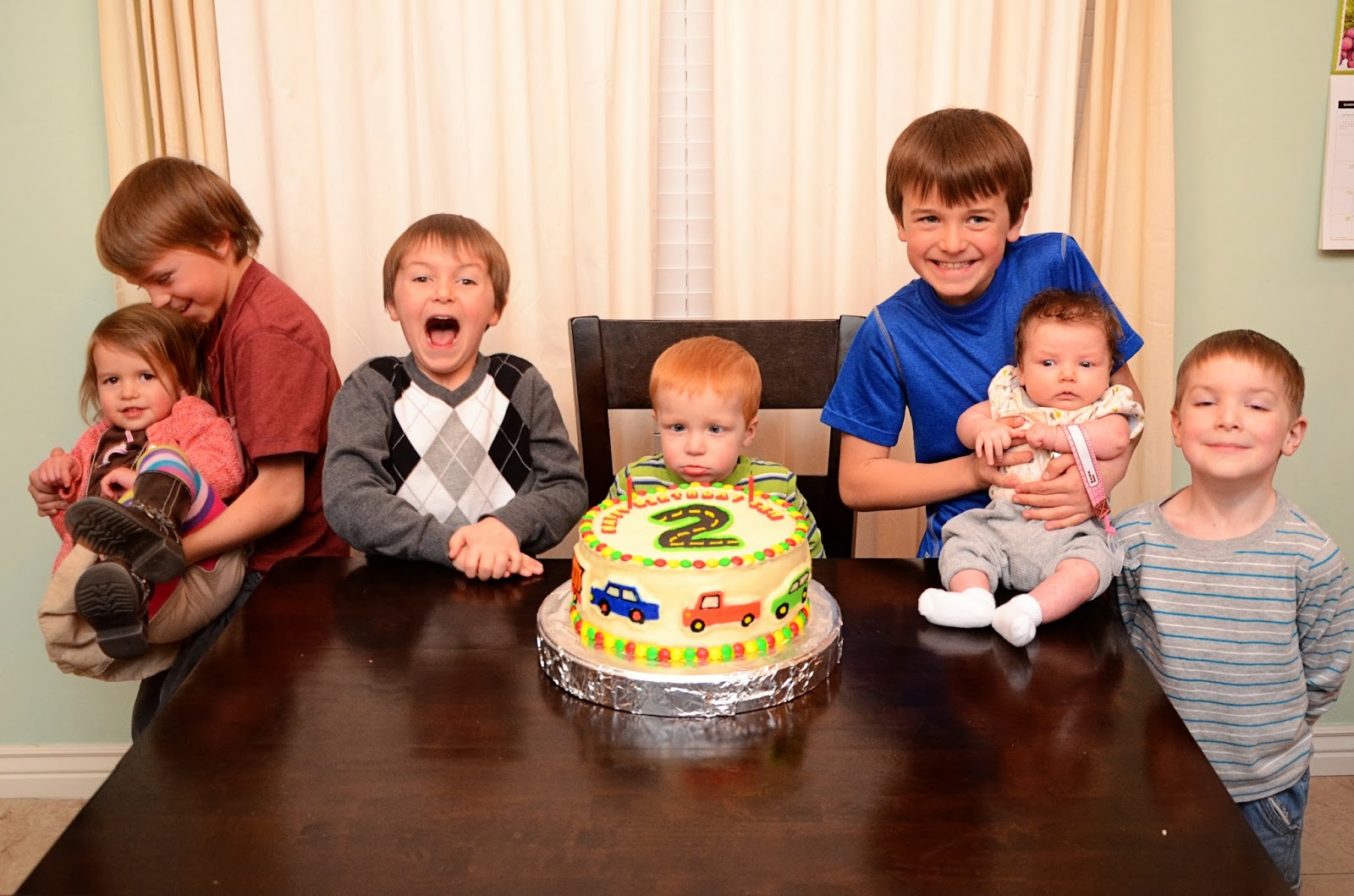 Sam kept trying to blow out his candles even though he already did... 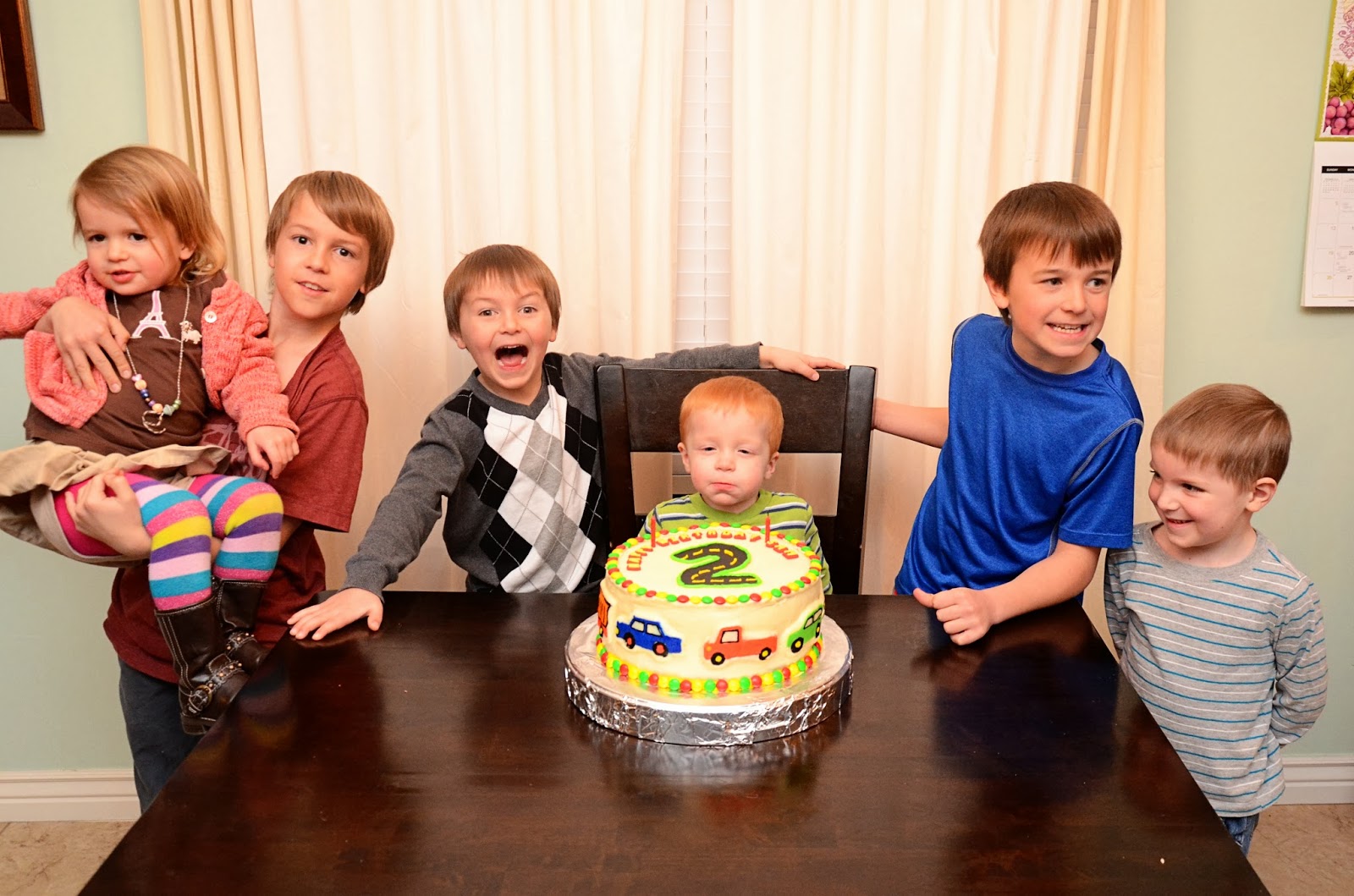 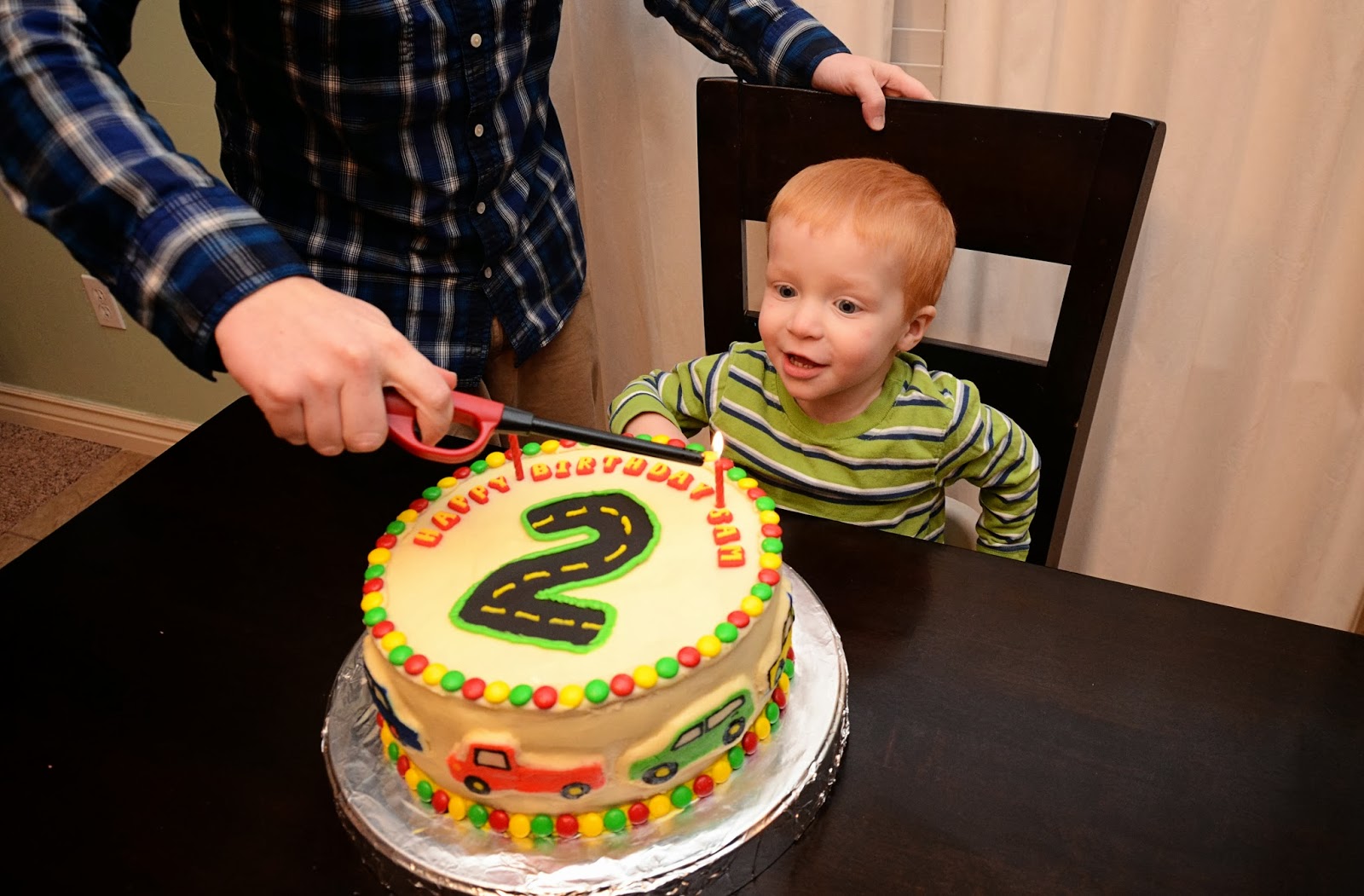 He definitely loved his cake! 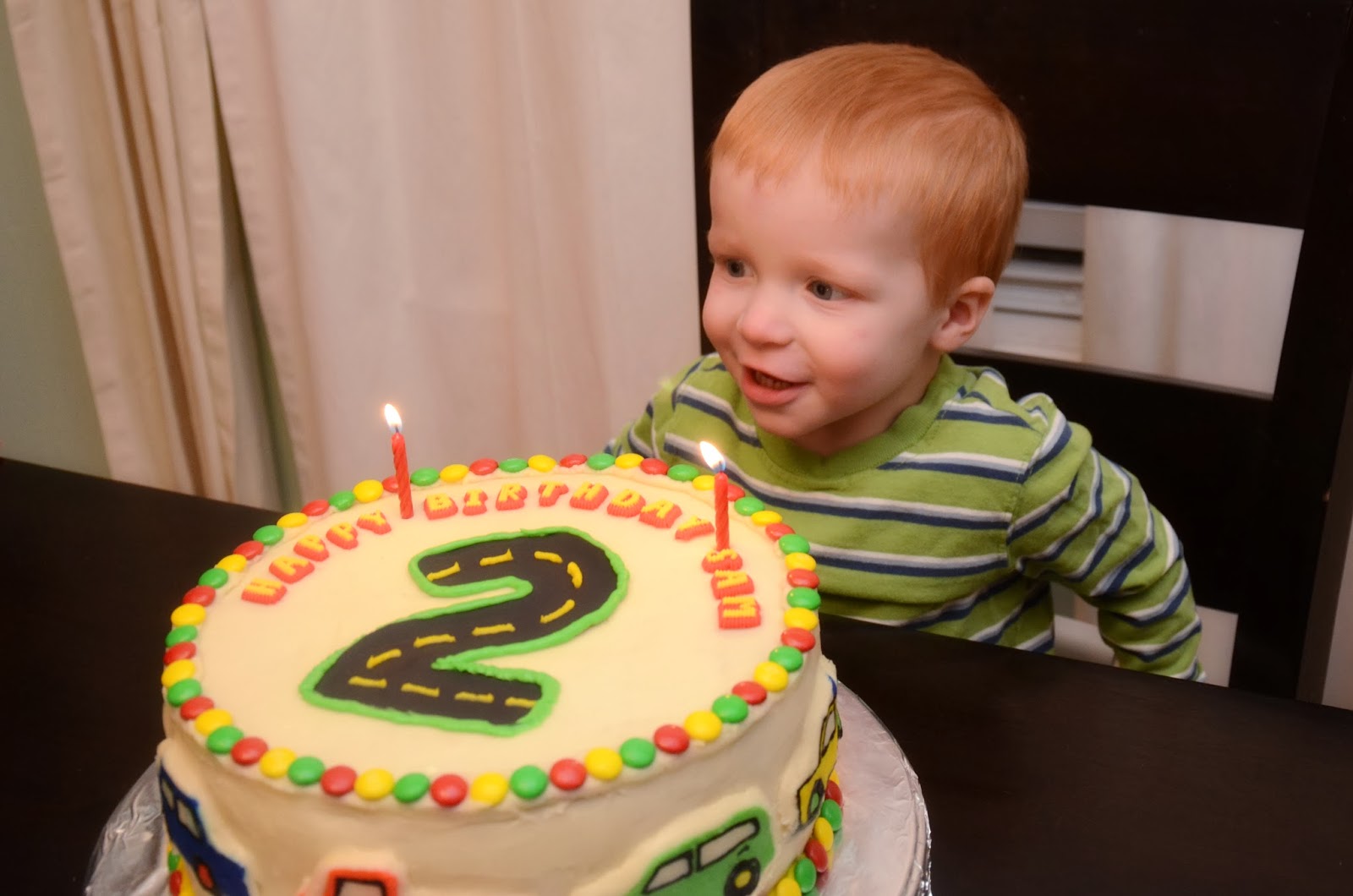 He got all shy when we were singing to him. 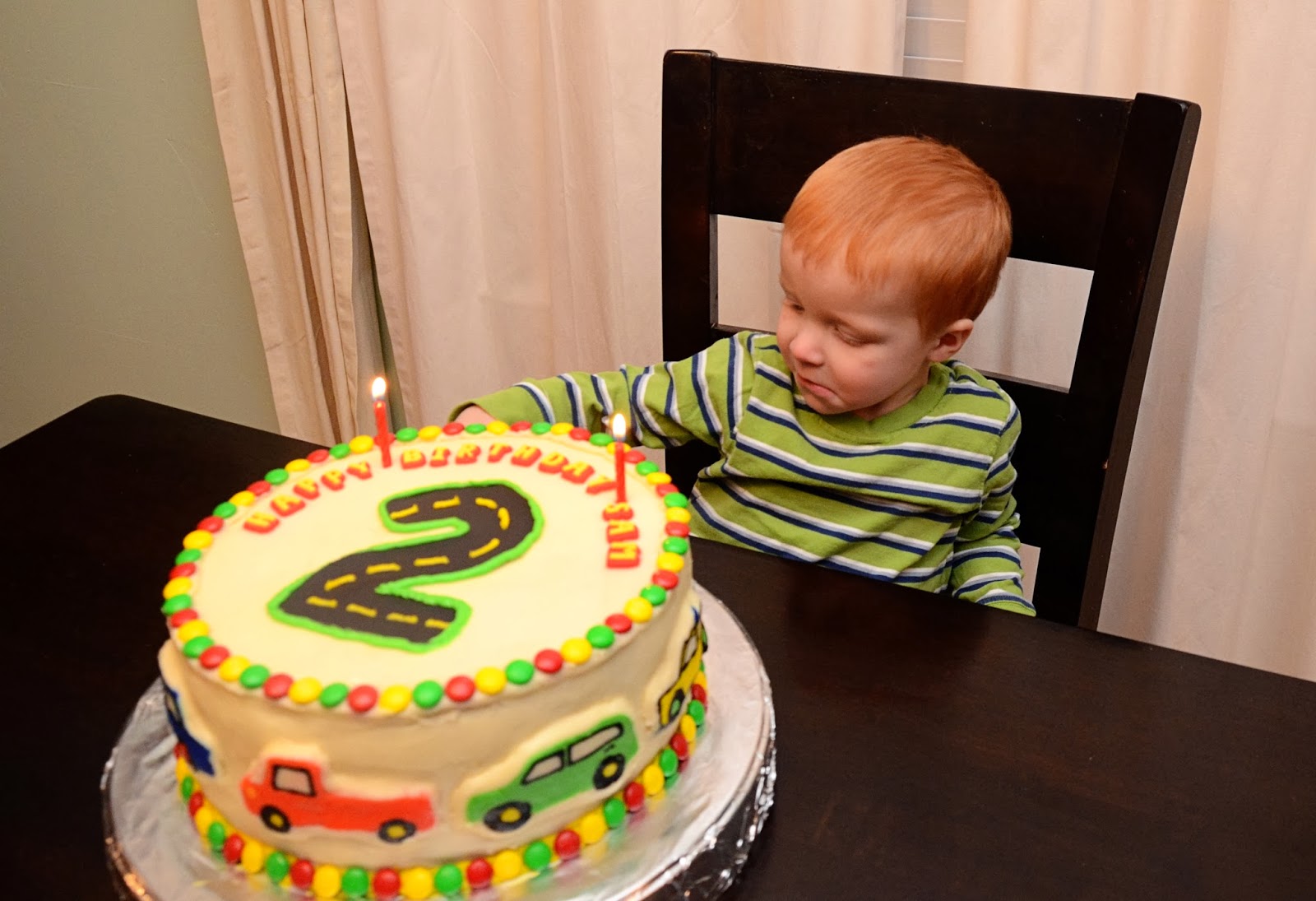 My one regret was not taking a video of him blowing out the candles because it sure was cute!!  It took a few tries, but he did get them blown out at the same time! 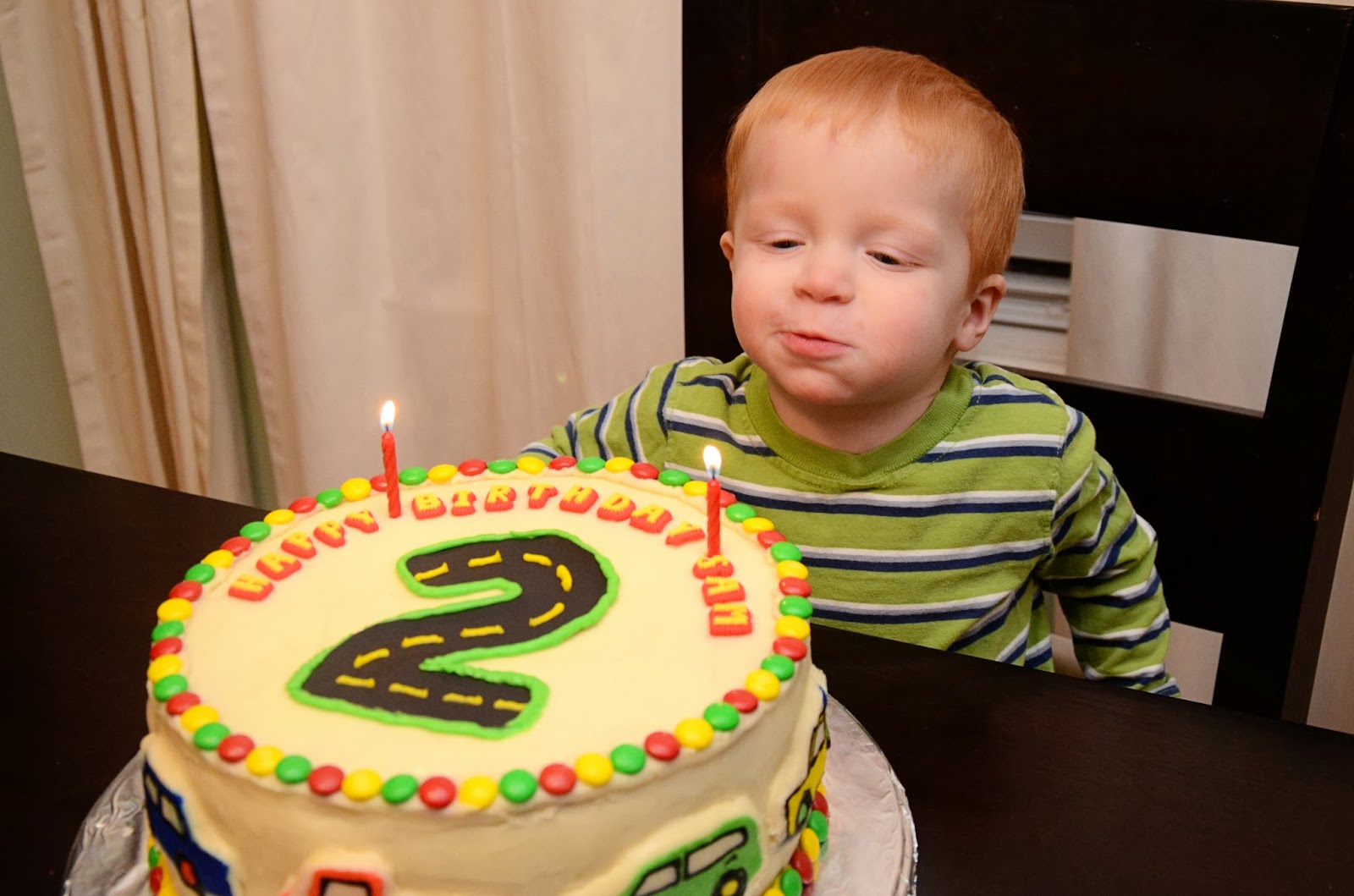 Then like I said before, he kept trying to blow them out after they were out!

The funniest part about me spending all day making him an awesome cake?

So he had ice cream instead! 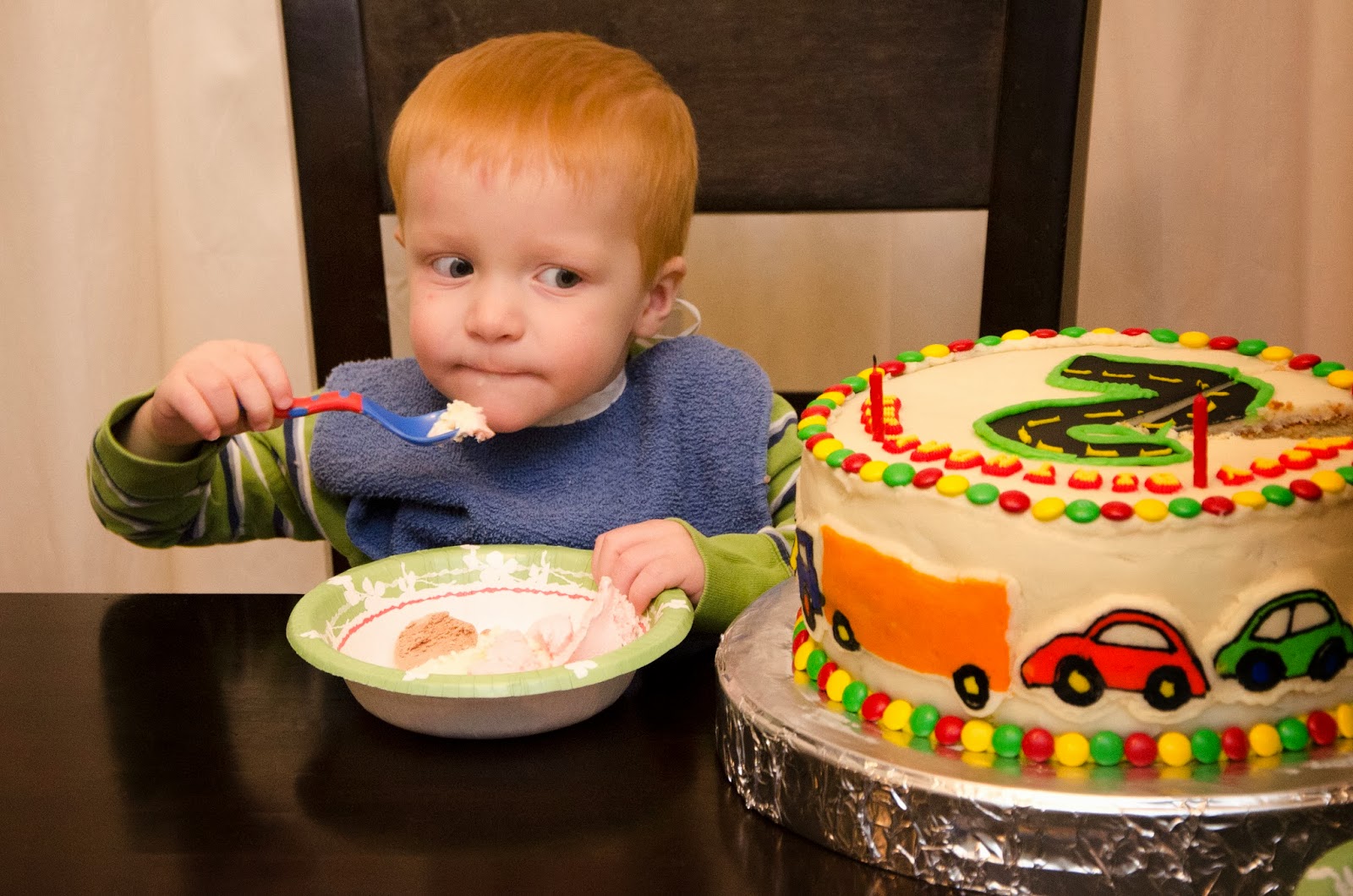 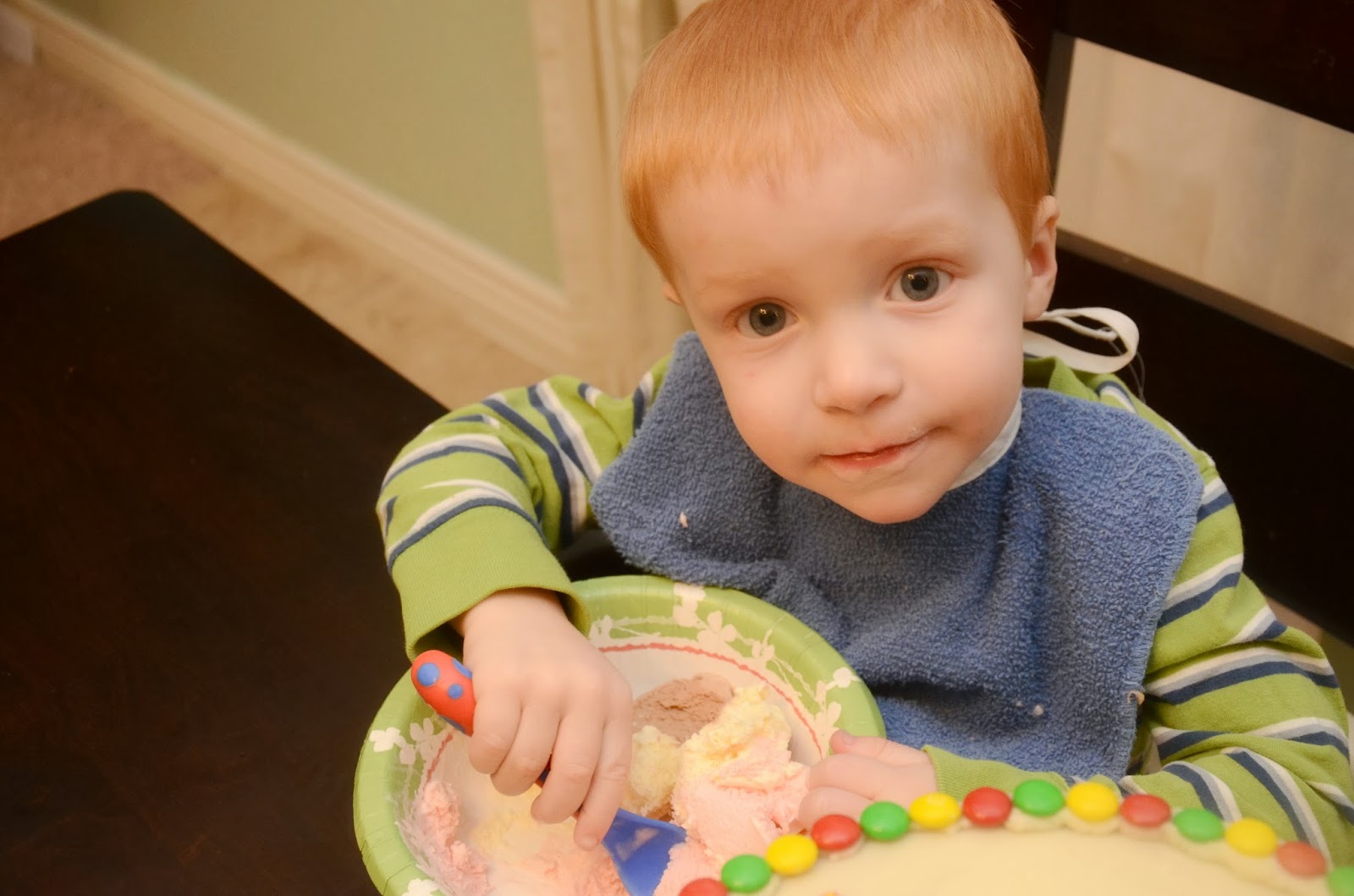 Here is what I worked on ALL day... 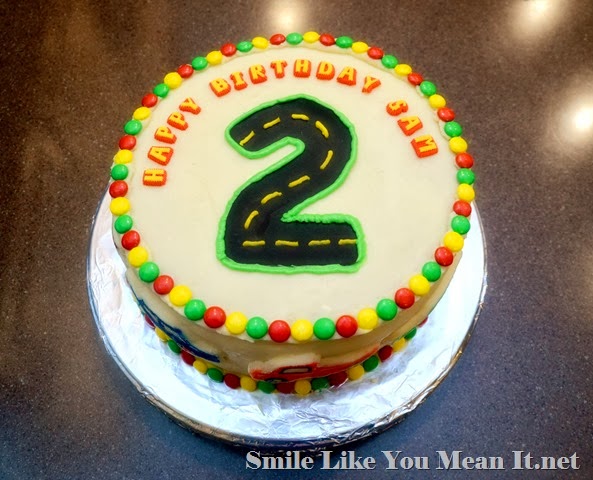 I used m&m’s to make the borders, and I cut out the number 2 from a black Wilton sugar sheet.

Then for all the cars, I used the butter cream transfer technique that I used for Luke’s Avenger cake last summer.  I just did it for a bunch of little cars and trucks. 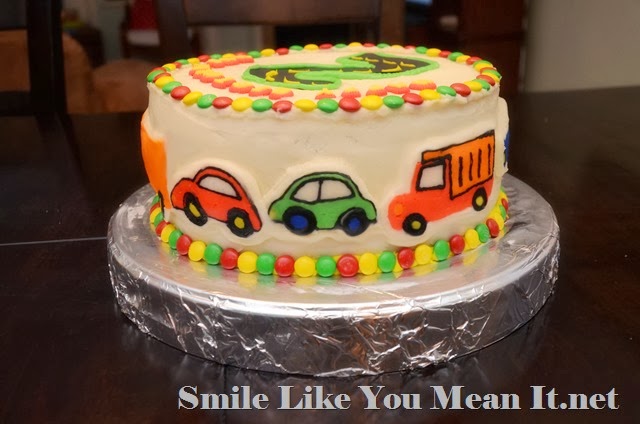 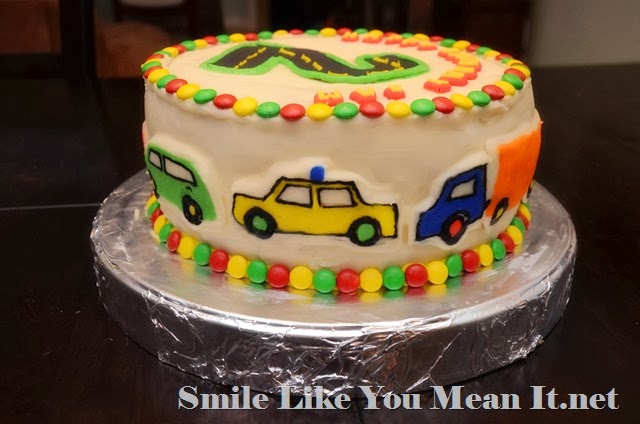 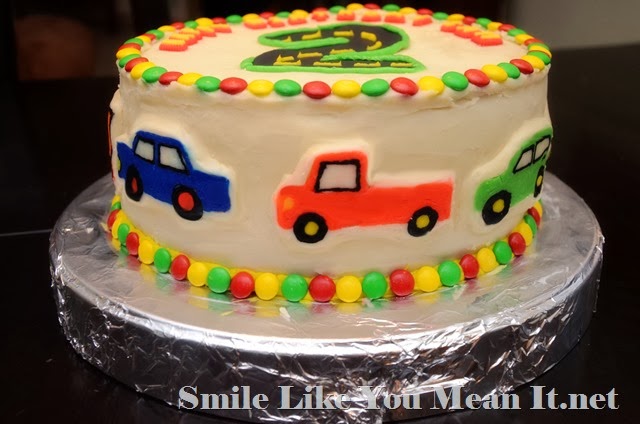 If I were to do it again, though, I would skip the butter cream transfer technique and just draw cars and trucks on the cake itself.  It was tricky getting them to stick to the side of the cake and they were so small that they melted really fast and were hard to work with.  I do have to admit that I’m pretty proud of my cake!  My kids may not get a big party every year, but they will always get an awesome cake made with love!!

I did take videos of Sam opening his presents—he kept saying “Ohhhh Woooowwww!!”

He got a big ball from the cousins--he pretty much was in love with it. 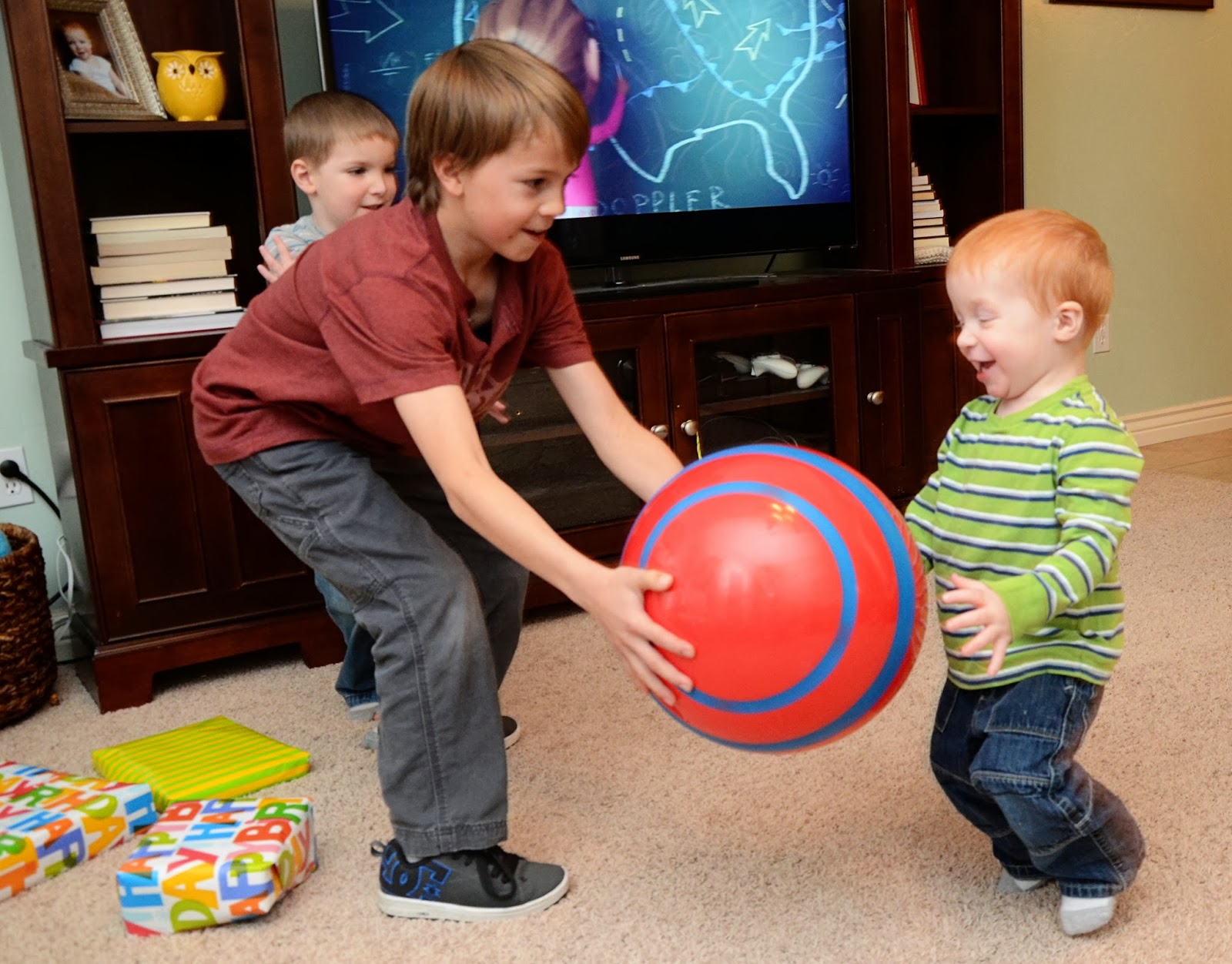 He liked his other presents too--puzzles, an interactive book and a really fun flashlight. 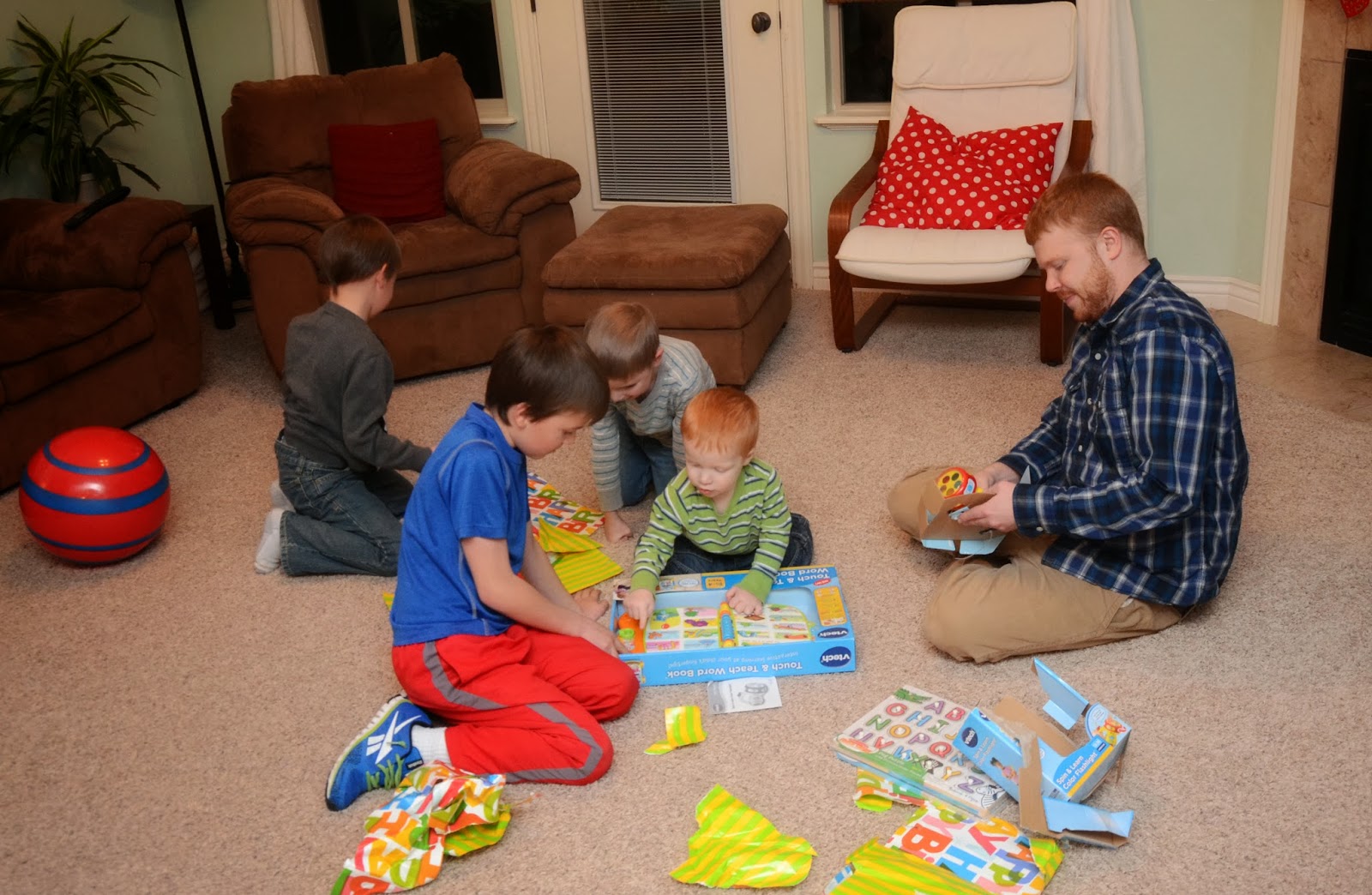 Happy Birthday munchkin! We sure are glad you are around!

Email ThisBlogThis!Share to TwitterShare to FacebookShare to Pinterest
Catagories of Interest: FamiLy, Sam, Stuff I've Made