Here are 3 of the Halloween projects I've finished so far, as promised! 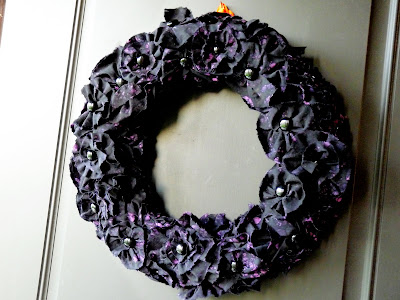 I am still planning on painting my door red in the next week or two, so that will help it POP more on the door.

Second, my jack-o-lantern wood project. I bought these guys unfinished from a friend in April. I painted the edges and the hats and then mod-podged paper onto the brims and pumpkin parts. The faces are metal pieces that poke out a little and jiggle because they have little springs on the back. Cute. She'll be happy to see them finished. 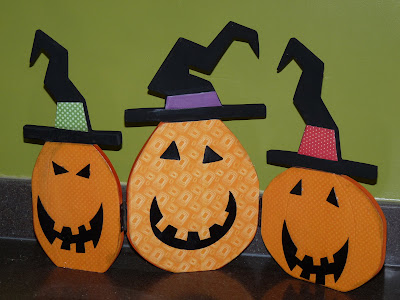 Third,
During the first session of General Conference today, I made these guys because it helped me focus on the speakers and because Scott went into work this morning and couldn't listen to it with me.

I got the idea from here.
I thought it looked simple enough, but modpodge, tissue paper, and I...
...do not get along.
I ended up double layering the green frankenstein one and now the light has a hard time coming through. And I messed up the face on the ghost, but you can't tell from far away so I guess that's ok. Overall it all still looks pretty cool awesome. 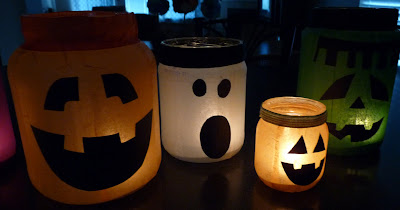 My friend Shelley gave me the idea for the mummy one. I think it turned out great! 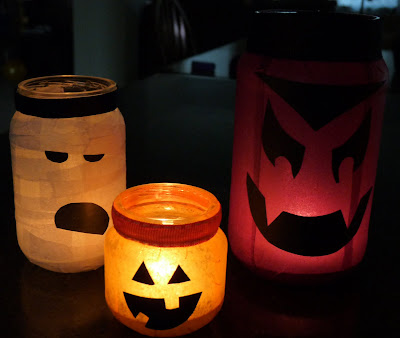 They look so awesome all lit up.
I must tell you how much you should appreciate the picture of them all lit up inside because let me tell you I HATE lighting candles. Scott was not home so I sucked it up and lit them just for you.

And a sneak preview of another ongoing project...Scott spray painted my branches (he sincerely wanted to so i let him) that I collected on Thursday night black. They are going to be AWESOME. 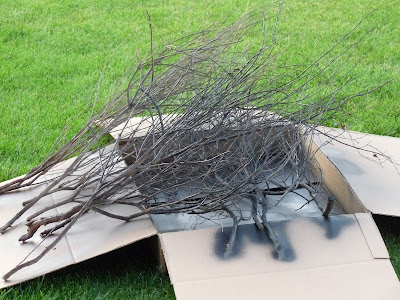 The end!
I put up more pictures when I finish more projects!
at 6:42 PM

Email ThisBlogThis!Share to TwitterShare to FacebookShare to Pinterest
Catagories of Interest: Holidays, Home, Stuff I've Made