Because for the first time since April 2007, ALL my best girls are going to be here together!! 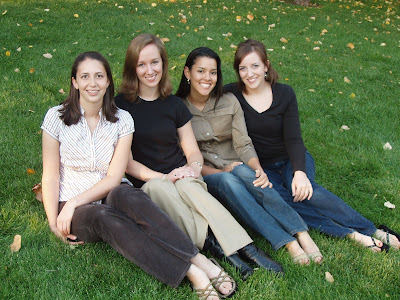 [Left to Right: Melissa, Lauren, Nikki, and Me!]

Wow, I can't believe it's been THAT long since the four of us have been ALL together. Granted, we went our various ways for various reasons...which makes things a bit more difficult.

Lauren left for a mission that summer to New Zealand.

Nikki stayed with me in our apartment until June '07, but then went home to Hawaii for the rest of the summer until school in the Fall.

I stayed in our apartment until I got married in July '07. After Nikki left FOUR other girls took her place and tried to completely take over and drive me bananas before I was FINALLY able to move out to GET MARRIED! I only liked ONE of those girls, because she was totally normal (and from OH where I grew up ;) Anyway, I got married, went on my honeymoon, then a huge Europe Cruise with Scott's family, and then we moved into a tiny basement apartment in Springville when we got back. We had one more year of school.

Nikki and I only saw each other a handful of times that year, and then school ended and she moved to Florida for an internship at Disney World. 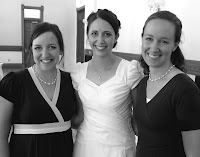 Then after that if we saw each other it was one at a time or two of us at a time--Like for Lauren's birthday parties, or when Melissa came home from her mission and then later for her wedding. But it hasn't been all four of us since that Spring 2 1/2 years ago.

Oh it's going to be so much fun!!
Nikki is flying in for the weekend, Lauren is driving down from ID, and Melissa is ditching her hubby for a night so we can have a sleepover! We're going to eat yummy food, giggle like school girls and have a grand ol' time.
at 5:32 AM