To me, August is almost depressing. It has always meant the ending of Summer and all that goes with it. It's a bit stranger this year because I'm actually not returning to school at the end of the month--how strange is that? But that's ok with me because I am so DONE with school. 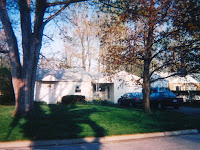 Scott is hoping to go back to school (not this Fall, but as soon as possible) He's been studying for the GRE so he can start a master's program.

I am, however, returning home to OHiO. Luke & I will be traveling there at the end of the month and staying for just over a week. I'm both nervous and excited. Nervous to take my crazy monkey on the plane alone without the hubby and excited because I haven't been home since 2007 and I just love going home.

Also, this is the month of our 5k! It's on Saturday of this week! I don't know how well we will do, but at least we will have fun trying. Yesterday I ran the length of it and only walked a few times--it took me about 40 minutes to get back home from start to finish. So that's pretty good.

Hoping this month to get some projects done, paint colors finalized and a mishmash of other things :) 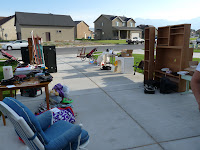 We had a yardsale on Saturday...but most of it wasn't our stuff. However, we had pretty good success and we did make some money! It was fun to hang out with 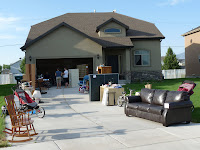 our friends while we did it more than actually doing it.


OH, and I've moved Luke's walking up to about 95% walking 5% crawling. Over the last week he's perfected getting up to standing from the middle of the floor both indoors and outdoors. He only crawls when he's trying to get somewhere (usually to me) really fast and trips first trying to walk fast. Oh it's so cute to see him toddle around! AND, his 2 new favorite things to do are to stick out his tongue and tell us what to do. He grabs our fingers, hand and moves them to push buttons, etc. He also trys to feed us and make us take drinks from his sippy cup. :) Love that Luke!

And this is a picture of the nasty huge bug that I almost stepped on in my bathroom on Saturday morning. We found it again later that night and I made Scott put it outside. I wanna know how it got in!! It was like 3 inches long! Groooossss. 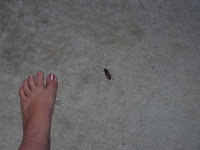 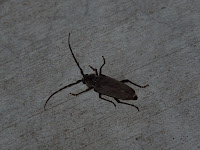