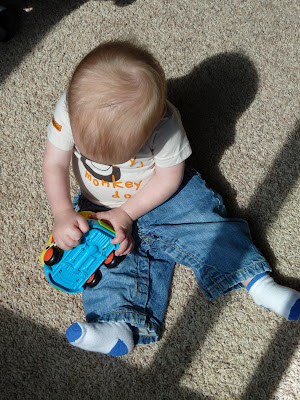 Things I forgot to put in Luke's 11 month post that I don't want to forget:

He's learned where the nose is! We say "where's my nose?" and he points to it! That's another thing, he's pointing to things now. We've begun teaching him some baby signs to help curve the hitting he's started doing. Hoping that through baby signs he'll get less frustrated and use the signs to tell us what he needs.

He plays "slow" peekaboo which I have to get a picture of because the mischievousness on his face is adorable. I'll throw a little blanket on him (or his pants during diaper changes) and he'll start moving it off his face really slowly and carefully and he peeks to see me with one eye and a huge grin on his face. He loves it.

He likes to crawl under my legs when I'm sitting on the couch. Sometimes he'll just lie there and hide.

He always stops to listen to loud noises like trucks and motorcycles driving by outside.

He hates the grass--every time I put him on the grass he crawls up on me as fast as he can. I guess it's too pokey for him.

He's VERY ticklish. I tickle him often because he's got a cute little giggle.

He's getting really fast at creeping and doesn't even really hold on sometimes. Maybe he will be walking sooner than we think.