Does anyone else want to help me kidnap Puxatawney Phil and drown him in a nearby river? 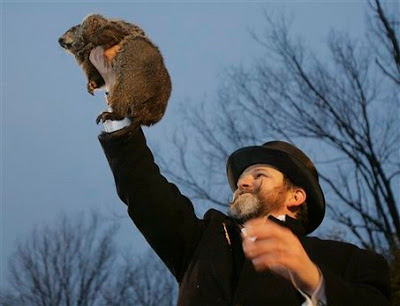 (PUNXSUTAWNEY, Pa.) The world's most famous groundhog has seen his shadow which, legend has it, means this already long winter will last for six more weeks.

Punxsutawney (punx-suh-TAW'-nee) Phil's forecast was announced in front of thousands of revelers gathered at Gobbler's Knob in Punxsutawney, about 65 miles northeast of Pittsburgh. They gathered Monday morning in near freezing temperatures, with many revelers buoyed by the Super Bowl victory by the Pittsburgh Steelers Sunday night.

German tradition holds that if a hibernating animal casts a shadow on Feb. 2 — the Christian holiday of Candlemas — winter would last another six weeks. If no shadow was seen, legend said spring would come early.

Since 1887, Phil has seen his shadow 97 times, hasn't seen it 15 times, and there are no records for nine years, according to the Punxsutawney Groundhog Club.
at 6:30 AM