Today i am 5 months oLd. 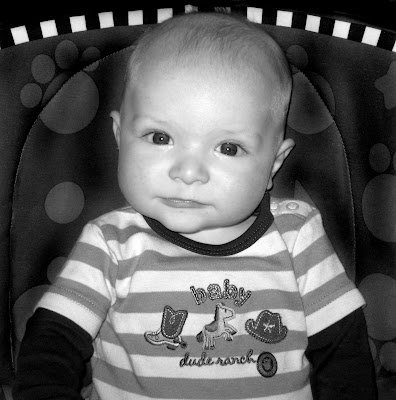 I estimate he's close to 13lbs. Still a bit on the small side for his age--most of his friends that are 2 months younger are the same size or bigger. It's ok with me though--less clothes i have to buy and more time to keep my cute little baby :) 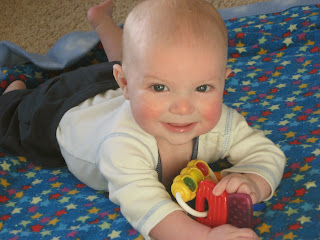 It amazes me how much babies change in the first year--it truly is incredible. I can't believe Luke is only 1 month away from being half a year old already. Next summer will come all too quickly and Luke will be talking and toddling around before we know it. I think between 4 and 6 months are the optimal fun months for babies, though. He's doing lots to be fun and entertaining for us, but still can't move around quite enough to get into trouble--most of the time.

Now some of what Luke is up to: 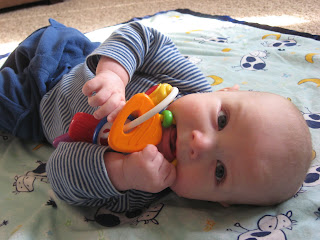 He'll chew on anything from a spoon to a nearby arm or finger (even if it's not his), but his favorite toy is by far his keys 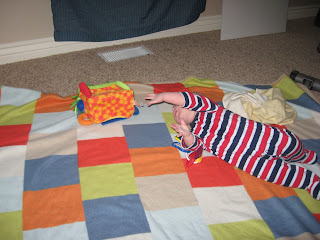 Since learning how to roll over about 3 weeks ago, Luke can go from one side of the room to the other, but sometimes he still finds his toys out of reach. He does best on his back rolling left to his tummy. He have no problem rolling back once he's on my tummy. He definitely prefer to sleep on his tummy now, but he gets stuck sometimes against the crib walls at times because he can't roll towards the right. 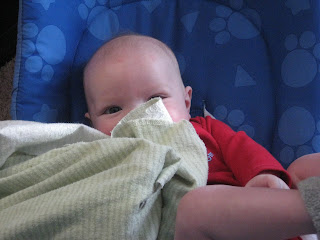 Luke has figured out Peek-a-Boo and it's hilarious to play with him. He'll use anything from a washcloth to a nearby blanket to play with me. He does it especially if I'm ignoring him because he knows it'll get my attention. Again, we have a very cute video but Blogger doesn't want to upload videos. I'll have to figure something else out so you guys can see all our cute videos. 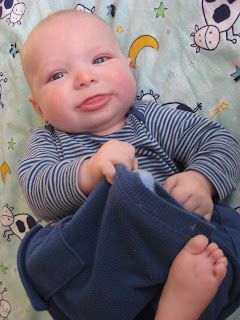 Luke has started to blow raspberries (and take off his socks as seen in the picture)--he's not very good, but he still likes it. Scott does it most with him, and sometimes when Luke is calming down for bed on days when Scott isn't home from work yet, he starts doing raspberries softly and it's almost as if he's thinking about his daddy and it's his way of saying "Daddy" right now--it's very sweet. 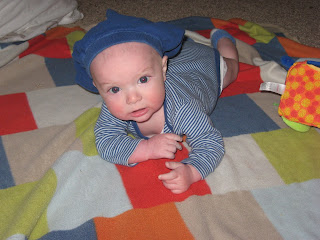 One day i decided to put Luke's pants on his head. and take a picture. He actually really likes wearing hats and gets very happy when we put stuff on his head--since i don't have any hats that fit him right now i put his pants on his head for a while. He looks like a little chef! 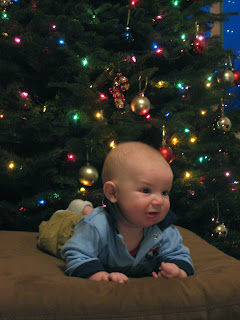 Christmas Picture attempts 1 and 2.
Both a bit too blurry, will be trying some more in a few days. 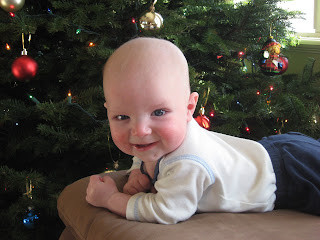 Hope you enjoyed this update from our cute little boy!!