I may behind in blogging lately, but I refuse to skip my annual Halloween Post!  I put in way too many hours on these costumes to skip it! 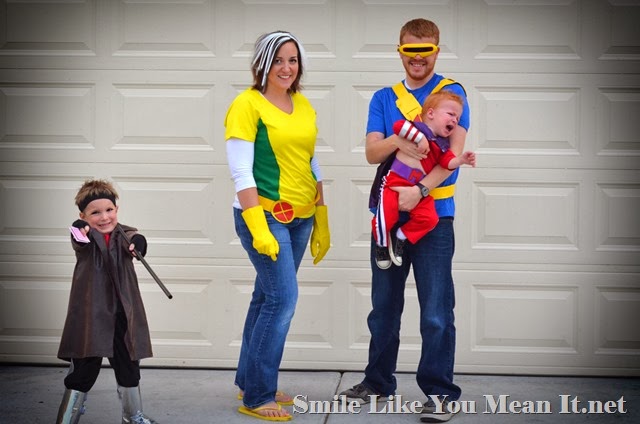 We did manage to get some good shots of everyone at some point during the day.

The X Men characters we chose: Rogue, Magneto, Cyclops and Gambit.  If you’re familiar with the comic, then you know that Rogue and Gambit were on-again off-again love interests.  Which is why I wanted Scott to be Gambit, but Luke was wanted to be Gambit so we let him!  About 50% of the people we encountered knew who Luke was which was good enough for me! 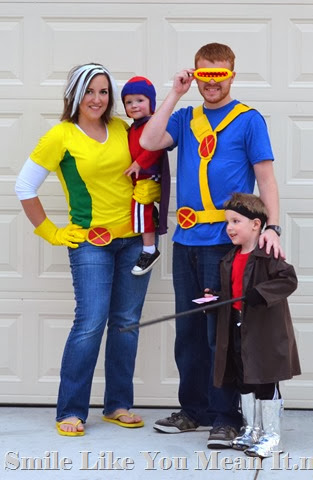 Sam was only smiling because Scott was turning on the lights on his glasses to get Sam to look at him!  Whatever works! 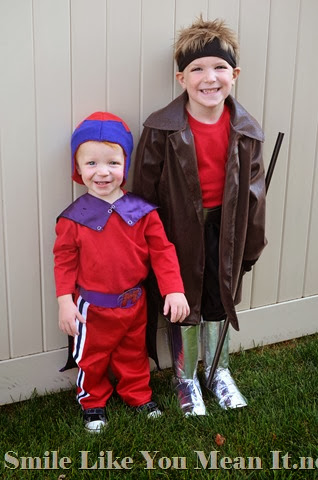 He’s actually running away to go play in the dirt…so this is the last good picture I have of Sam from Halloween!  At least he was a cute Magneto! 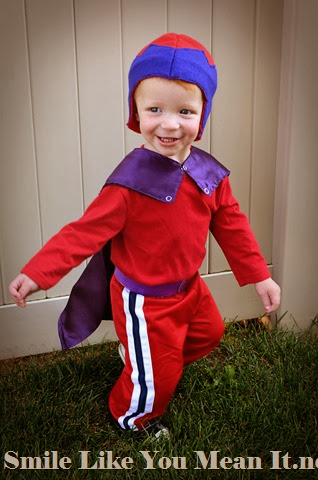 Sam was Magneto because it was basically I decided it would be easy to make this costume and it didn’t require a mask over his face or any weapons (like wolverine, who was the other option).  His hat was made from fleece—I adapted it from this ear-flap hat tutorial.  I made the cape from scraps and attached snaps. The belt was made from purple and red duct tape.  I made a chest plate that the cape was supposed to attach to, but it ended up being way too big so I nixed it.  If Sam were older, we would have made him gloves with magnets in the fingers so that he could really pick up metal objects (so cool!)  but he’s too little for magnets.  Just an idea in case you are looking for more Magneto ideas. 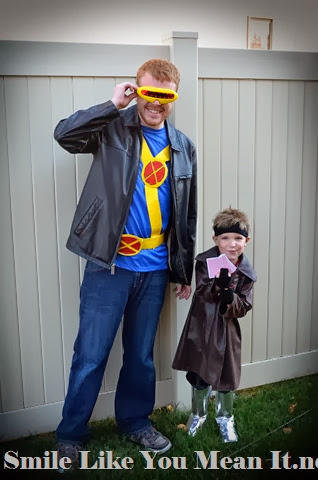 I was nervous about Luke’s costume because I knew it required a trench coat.  Where do you find a trench coat for a 5 year old that doesn't cost a hundred dollars?  You don’t.  So I had to find a sewing pattern at Joann's ( i got lucky and actually did find one!) and bought the material at Wal-Mart.  Then I spent almost an entire day sewing it.

The rest of Gambit’s costume was a fleece headband (easy), a silver belt (thank you silver duct tape) and boot covers that took an hour for each boot.  I basically made up my own pattern, sewed it out of felt-backed vinyl, and then covered the pieces in silver duct tape.  I made straps of the same materials and then attached velcro to make it easy to take them on and off.

If you can see that wire hanging out of Luke’s glove…Scott made him a little light-up contraption so that Luke’s cards would glow like the real Gambit.  It’s just hard to tell in the pictures. 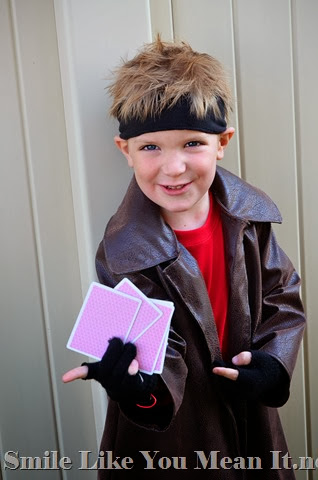 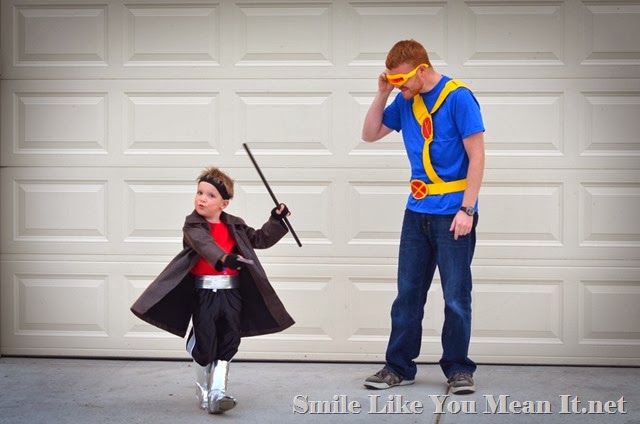 Scott actually made his awesome glasses.  He ordered all the parts, lights, and glasses frames online and worked on it all evening before Halloween.  It definitely made his costume awesome.  The rest of this costume was made by me—entirely made from duct tape, duct tape covered vinyl and velcro. 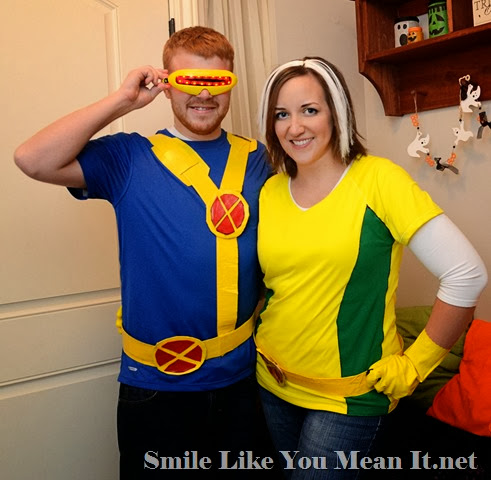 I found the yellow t shirt and then sewed on green pieces to make it like Rogue’s attire.  Then I found hair pieces at the Halloween Store and made myself a duct tape belt.  Considering I did not want to dress up at all this year, I think it turned out pretty good! 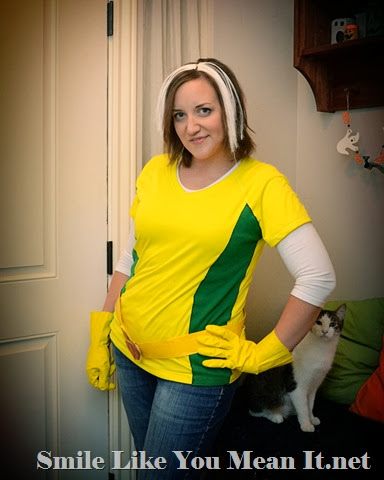 My kitty was totally photobombing my selfies!

We went to Scott’s work at DOMO and got a ton of candy. I think trick-or-treating at DOMO was my favorite Halloween party of all the places Scott’s worked.  There was TONS of candy everywhere, everyone was having fun, there were lots of offices decked out (even one area that was pretty spooky and had huge glowing blinking eyes on all the surrounding computer screens), the building was playing music and did I mention TONS of Candy!?  We got more candy there in a half hour thank the rest of our trick-or-treating for the day!  Turned out to be a lot better of a night than I was planning it to be.

Hope your Halloween was a happy one!

Email ThisBlogThis!Share to TwitterShare to FacebookShare to Pinterest
Catagories of Interest: FamiLy, Holidays, Stuff I've Made