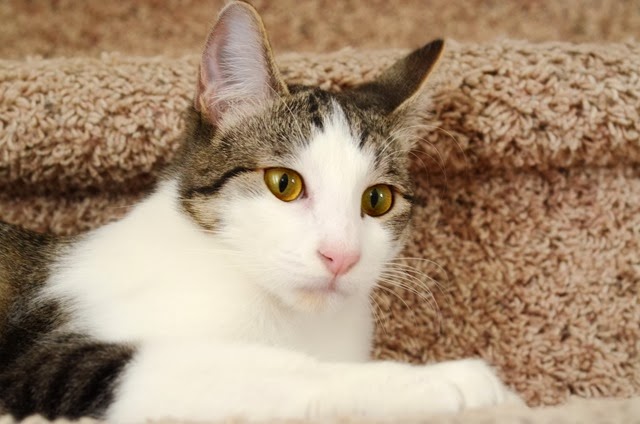 I put this post off originally, because we weren’t sure if we would be keeping this cat.

That was in January.  And we still have him.  We are definitely keeping him!

I read Cats for Dummies before we started looking in January.  There were a lot of people telling me things about cats that I came to find out weren’t true at all.  I learned a lot and feel good that I took the time to get to understand cats and their behavior so when we got one I would know what to do.

We went to “Kitty City” a few times—it’s a huge kitty center in the SLC humane society.  And we did find a couple cats we really liked, but we ended up getting one through the KSL Classifieds.

We adopted him from a couple who were moving and didn’t want to take a cat with them. He was a good age—not a kitten (not good for little kids) and not too old –He was about a year old (Sam’s age).  He came with everything we could need—including a big new bag of food, toys, carrier, litter box…and a bunch of stuff the kitty doesn’t even like (scratching post).  So it was worth the gamble of not knowing much about him to take him home.  He was a bit skittish and didn’t want to come out of the room to meet us…so it really was a gamble.

We took him home and let him have the guest room & bathroom as his safe zone.  He came out of his carrier and immediately took refuge under the bed and didn’t come out.  That was 5pm.

At 10pm before we went to bed we went up to check on him and he came out!  He was purring really loud and let us pet him.  And that made me feel so much relief—maybe he would like us after all.  We kept him in there all night, and the next morning we let him meet Luke and he seemed to want out of the room at that point, so we let him out to explore for a while.  Then back in the room he went.

After the first day we left the door open and he could come out as he pleased.  And he did—he explored the whole house. 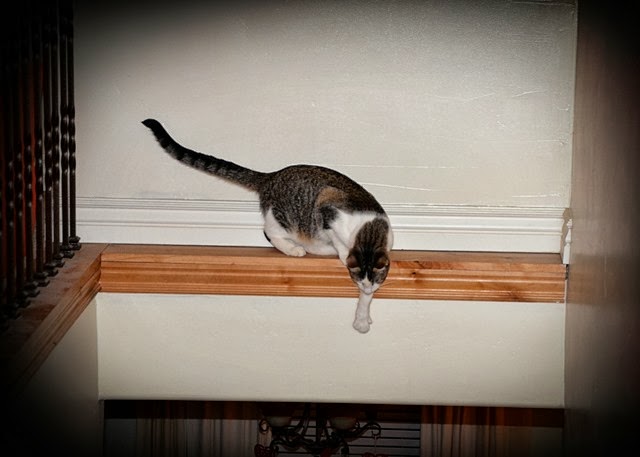 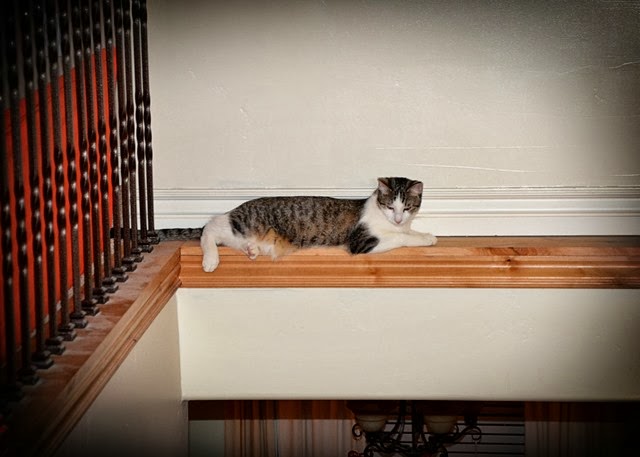 He seemed like a good kitty, but there were some problems right off the bat.

The first owners never clipped his nails so all of his nails were super long and sharp—they kept getting stuck in the carpet when he tried to walk around! It took some coaxing and sweet loving to train him to let me to clip his nails.  I did only 1-2 at a time at first.  Now he doesn’t even blink when I go to clip his claws.

The next thing was he would also get SO crazy at night time after the kids went to bed! He was bolt up and down the stairs and then pounce on my shoulder at the top of the stairs—which hurt since his nails were so sharp!  He had never lived in a place with stairs before.  He still goes a little crazy, but we know now he’s just getting some energy out and he doesn’t do it when we are sleeping.

The near deal-breaker was that he didn’t like Sam for a long time either.  It took about 8-9 weeks from the time we brought him home for him to accept that Sam was staying around and he better get used to it and stop trying to nip at him. 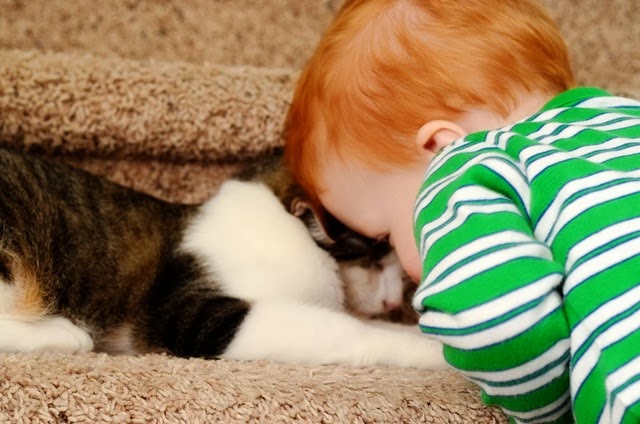 We taught Sam how to be gentle and soft to the kitty so that Kitty wouldn’t get irritated and start nipping.  Kitty never actually bit, but he did some warning bites that don’t hurt.  Look at this in-action photo I got one time when Kitty had had enough!  He didn’t actually bite Sam, but it looks like he’s gonna! 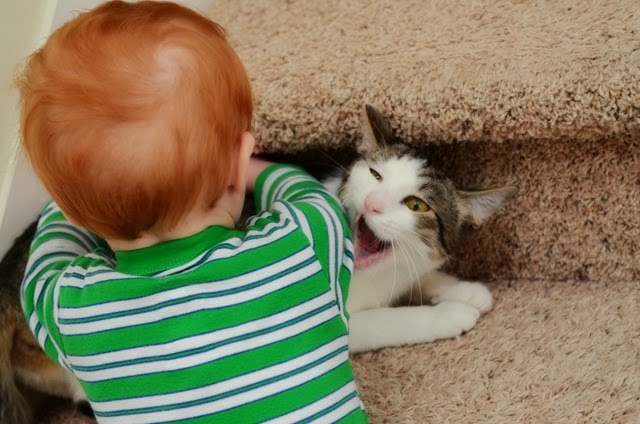 That was taken in February when we were still on the fence.  Since then, we’ve decided to keep him, so we gave him a name {Cookie} but we mostly call him Kitty. 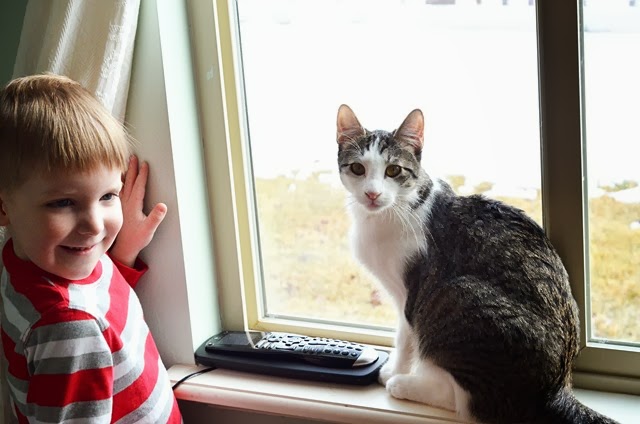 He actually doesn’t mind Sam petting him and loving on him anymore. 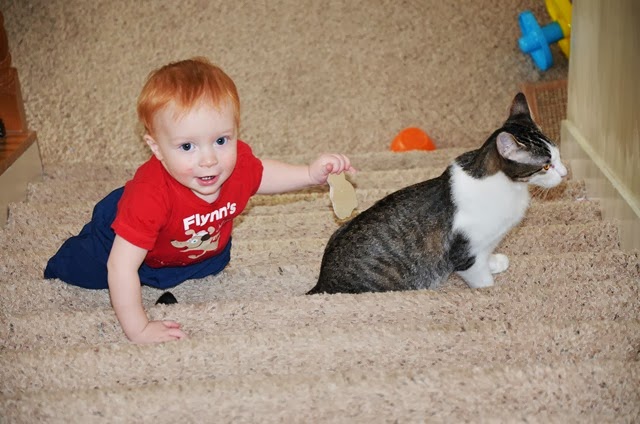 The other day I watched Sam drive his toy cars all over the kitty and Kitty just laid there lazily.

I love finding Kitty in new spots (in the closet, in the hamper, on random chairs in random rooms of the house).

Kitty likes to lay on the stair right below the top one.  Sometimes he peeks up and watches me on the computer. 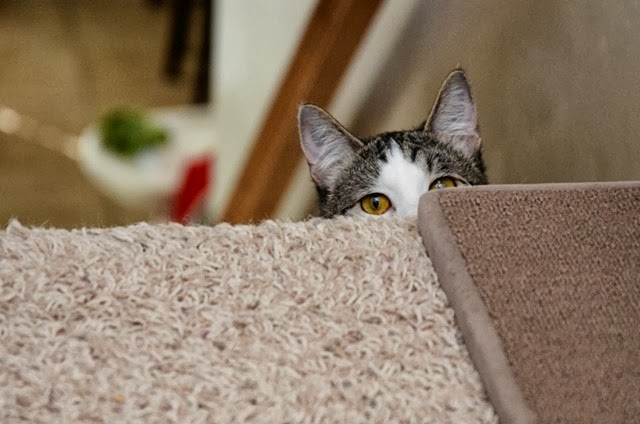 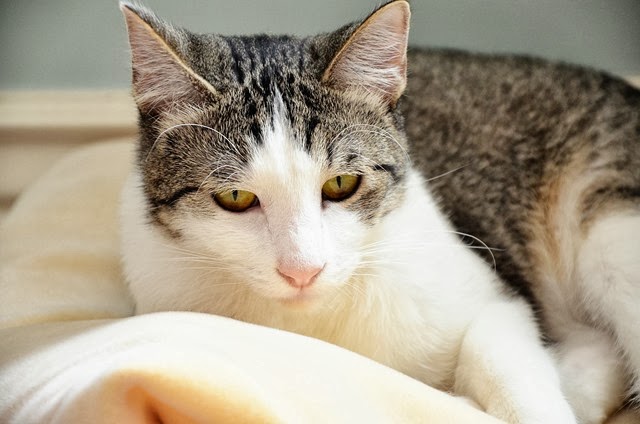 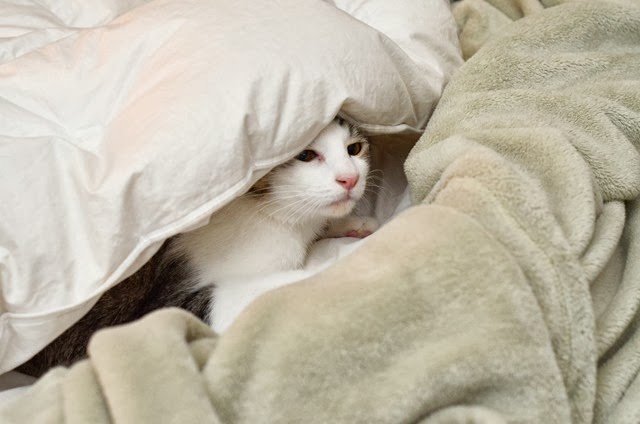 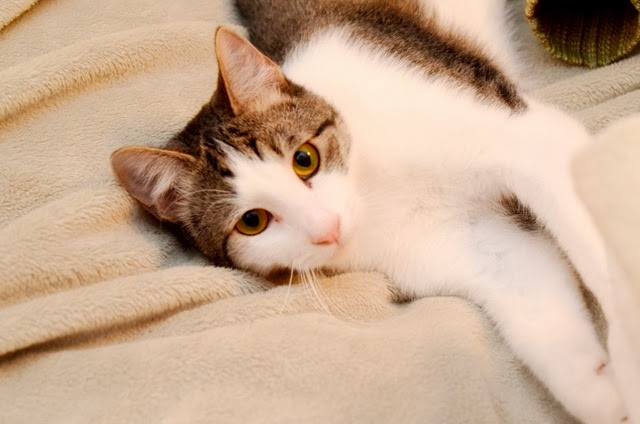 Including in my laundry when I’m folding it on the bed.  He likes to attack it if he’s in the mood and that gets him thrown off the bed. 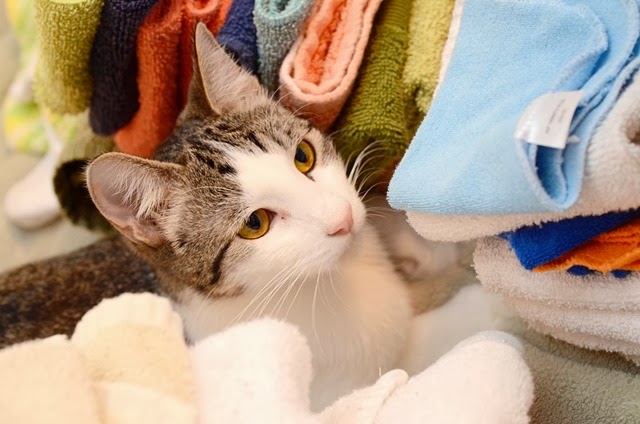 Back in March when I was de-cluttering my fabric stash, I had it all on the guest bed and he thought that was a fantastic spot to hide out in. 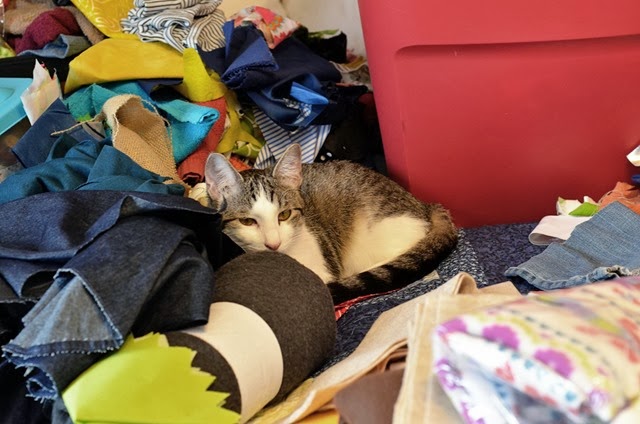 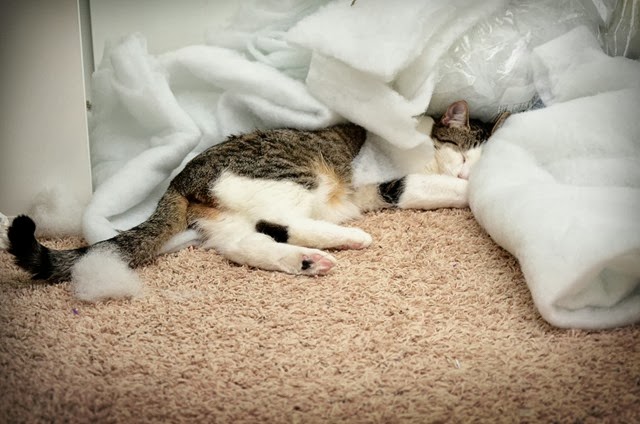 Until Sam thought he’d lay down on top of him. 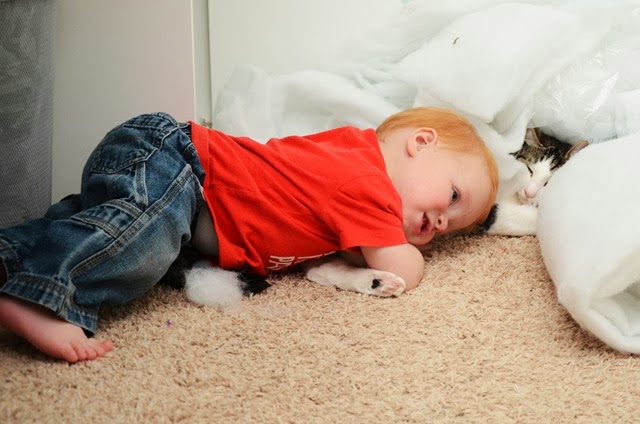 I’ve trained him to stay off the counters, and to be patient while I clip his nails and brush him all the time.  He is very patient with Sam now.  Today I found Sam “driving” his cars on Kitty and Kitty just laid there and let him do it.

There’s still some things that bug me sometimes—like when he waits for me to wake up in the morning and then come and snuggles right on my face.  At least now he waits til I’m awake—he used to do it all night long!  He also is DIRECTLY underfoot in the morning when I get out of bed and he stays within tripping distance until I feed him.  He also sometimes pushes open the door when I’m trying to get Sam down for a nap and that is a big no-no in our house.  I have to just shut the door all the way now.

He still jumps up on the computer desk and stands there until I pet him.  He always blocks my view and it gets really irritating when he won’t leave me alone everyday around 2pm.  I give him lots of loves, ear scratches and then pull him down on my lap so I can see the screen to work.  He usually then goes to find a new place to nap for the rest of the afternoon. 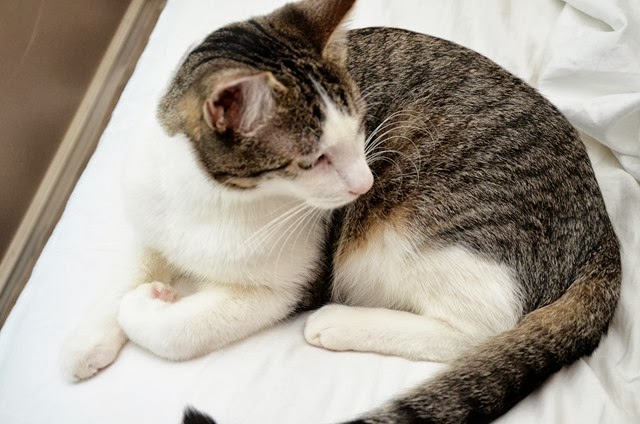 He’s such a good kitty otherwise.  If those are the worse things he does—I’ll take it!!  He could be scratching up my furniture and peeing in my closets!  So glad we got lucky with this loving kitty for our family!

Email ThisBlogThis!Share to TwitterShare to FacebookShare to Pinterest
Catagories of Interest: FamiLy, Kitty