I kind of missed the 2 month update…and this one is a few days late!  I guess that’s kind of how it goes when one is adjusting to life with two kids! So here is the 2 AND 3 month update!

Just some quick notes for his 2 month update: 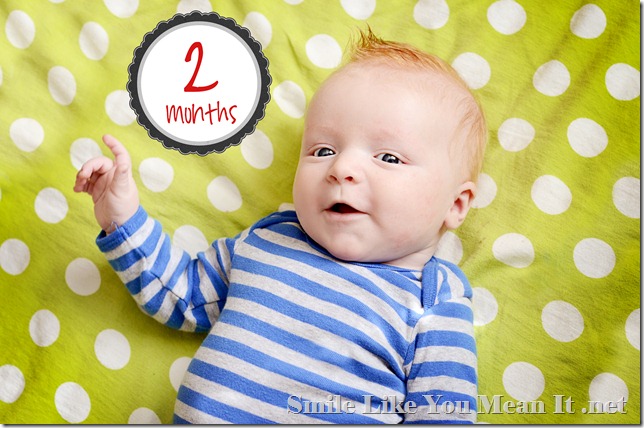 We discovered he had Torticollis (more on that later)

We also found out that the rash all over his cheeks, eyebrows and around his ears was an extension of cradle cap. 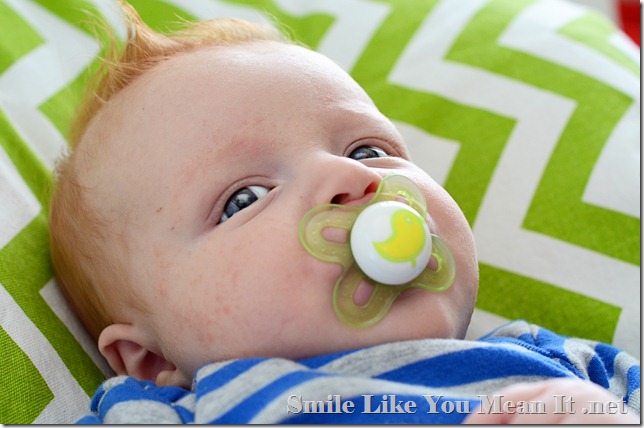 Started Smiling at about 8 weeks old 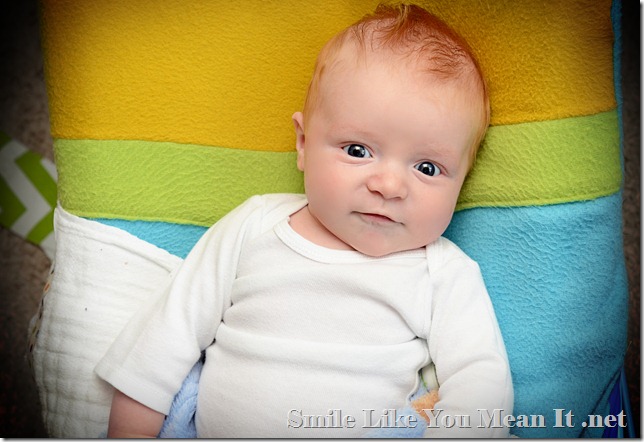 He didn't handle his 2 month shots very well.  He cried so much that night that he tired himself out.  He would scream and cry for a minute and then fall asleep--repeated this for a half an hour.  Poor baby!  Finally Tylenol kicked in and he was able to go to sleep for the night.

Sam has been a horrible night sleeper, and it was really wearing on me.  He would wake up every hour after 3!  Finally moved him into his room upstairs and it's been getting better.

Has rolled from tummy to back a few times.  I call this gracefully falling over. 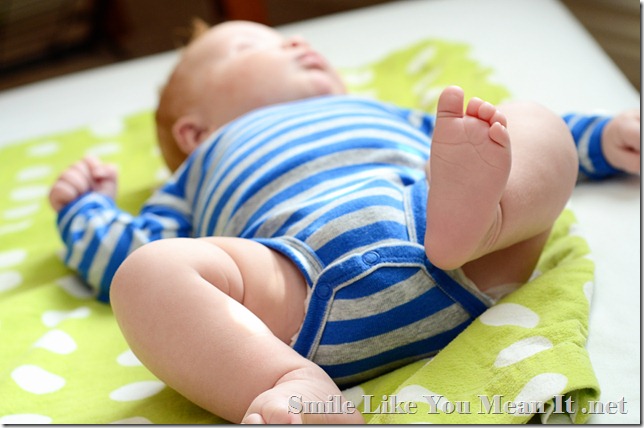 {missing the 3 month photo shoot picture…I’ll have to pop it in later!}

Genuinely smiles all the time now!  My favorite is when I am nursing him and he stops to give me smiles. 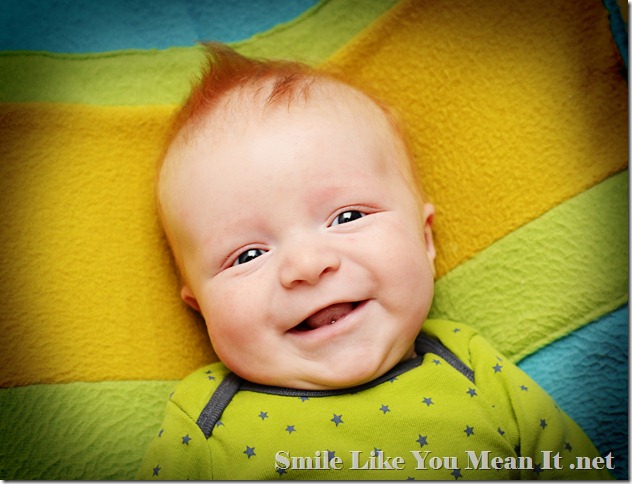 Grabs on to the neck of my shirt when he nurses; holds onto my thumb and pinky fingers with each of his hands when he takes a bottle.

First Laugh was 5-2-12 I was tickling his neck and he started laughing! Daddy came home just in time and got to hear it too!

This month Sam has been getting better at taking naps and slowly better at sleeping at night.  He takes several shorter naps (30-45min) often throughout the day (sometimes we get lucky and get 1-2 hour naps).  I’ve finally have him upstairs all night now since I’m pretty sure that’s part of the reason he and I were struggling so much.  It’s been a full week and he now goes to bed between 8-9 and gets up at 1, 4 and 7 to eat. This, I can totally handle.  Every hour? Not so much.  I’m going to get rid of the bassinet in our room and move my recliner chair upstairs so I won’t be tempted to keep him downstairs anymore.  We both sleep better when he is in his own room. 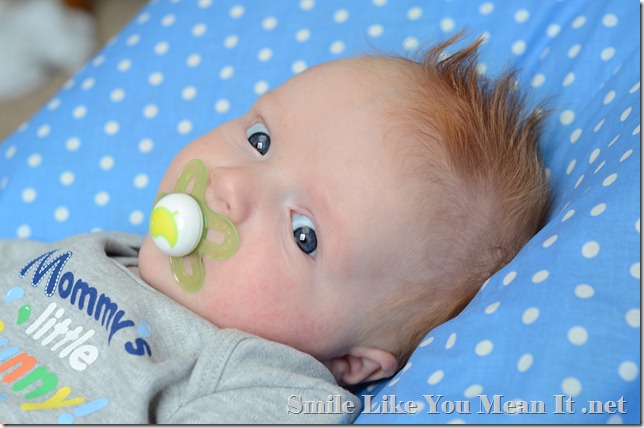 Sam still takes a binky.  By this point in time Luke was totally not interested in a binky (and we never got him to successfully take bottles much either!)  He only wants his binky when he is tired or stressed—which is good because I don’t want him to always have it in his mouth! I would much rather see that super cute smile of his! 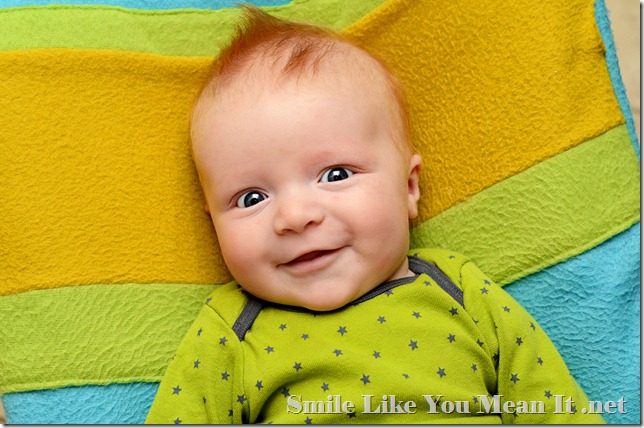 Blowing bubbles and cooing
Becoming a drool monster already
Starting to look like he might roll over onto his tummy any day now! 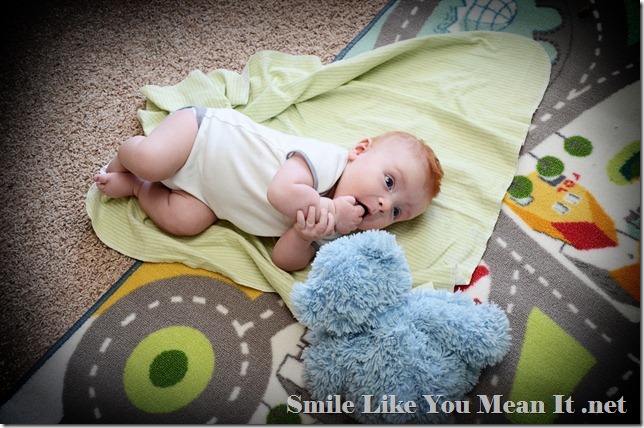 Constantly chewing on his hands! 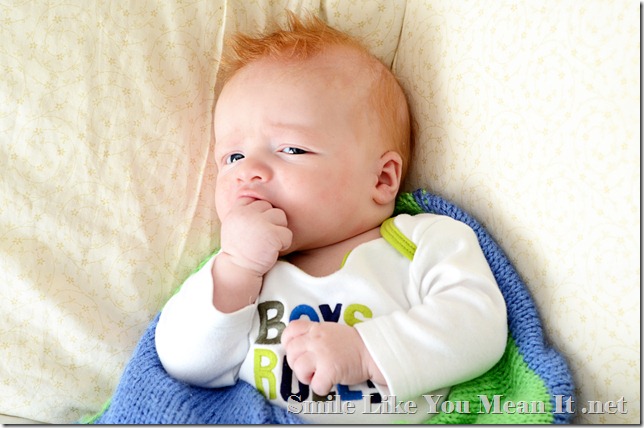 Finding interest in toys—especially the rings hanging from his car seat.  He likes to bat at them.  He also likes to grab the blinds and make noise with them during diaper changes.  (the changing table is in front of the window right now)

Cradle cap rash on his face has cleared up (hallelujah!)

Sam has to spend as much time as possible on his tummy (because of his torticollis which I will talk about in a later post) He has gotten pretty used to it and doesn’t mind it as long as he’s not too tired. I love tummy pictures because I get to see his adorable face more clearly! 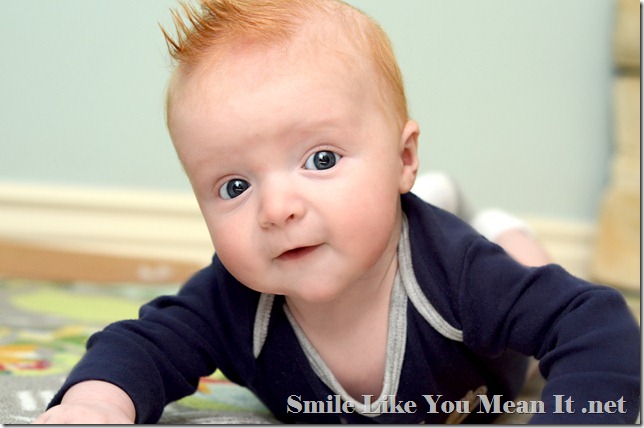 He likes to look at the TV, so I use that to my advantage when he’s on his tummy.

Super cute—even when he is sad!

And now for a few more cute pictures! 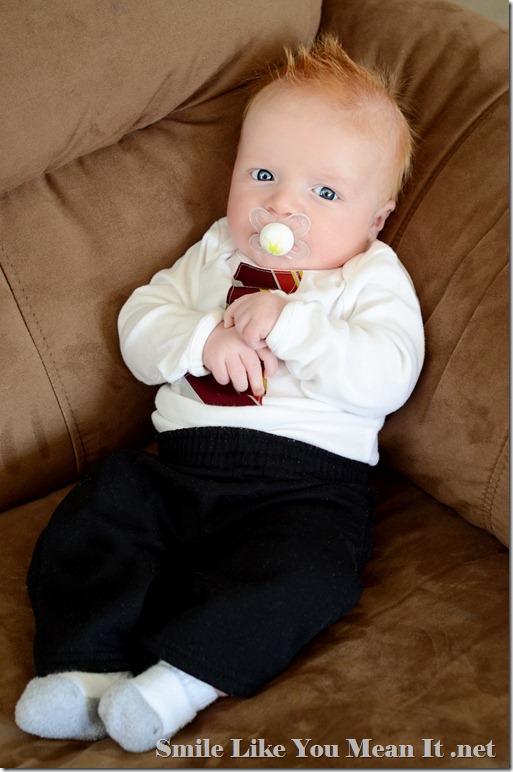 Sorry it’s picture overload!  This post will help me when I start making the pages for Sam’s First Year scrapbook so I have to get it all written down!  At least he’s fun to look at, right?