We had a pretty fun Halloween! How about you? 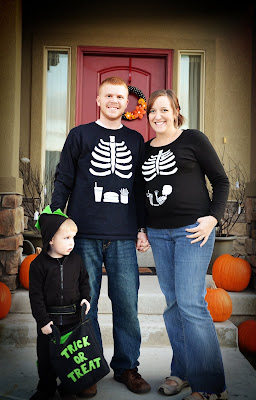 Scott was able to come home just after 2pm since he worked on Saturday, so we took Luke to Trick-or-Treating on Main St in American Fork. We only did about a block and a half since he was having trouble walking in his dino feet! (we ditched them for real trick-or-treating last night) Then we just hung out all afternoon until 6:00 which was the time we were meeting neighbors to go. I actually stayed back on account that the wind picked up and it was cold! I passed out candy instead! After Scott got back with Luke, they took a break and then we switched. I just took him to a few of my friends' houses though. AFter ALL the trick-or-treating was done, we went next door and hung out a bit with friends!
"Trick-or-Treat!!"
{of course he had no trouble saying it when he was at home!!} 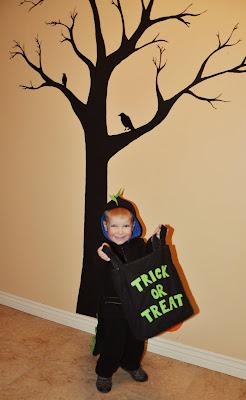 It was a good night and I got TONS of compliments on our shirts! 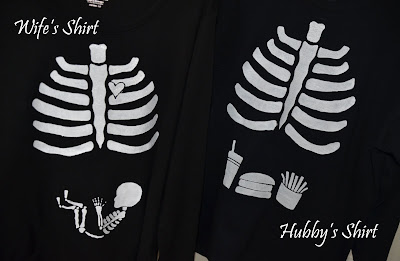 I made them using the ribcage & baby template found here with some tweaking to the baby's head and adding a hear to the ribcage on my shirt. Then for hubby's shirt I stretched the ribcage a bit longer and made silhouettes of fast food using images off google. I cut out freezer paper stencils for all the pictures using Sure-Cuts-a-Lot and my Cricut. Then I just fabric painted everything!

I also made Luke's trick-or-treat bag. It took forever (all day) but I felt like i HAD to put "Trick or Treat" on the front. I was afraid Luke wouldn't say it when it was time. He didn't for the most part but I got him to say it for 3/4 friend's houses we went to! I lined it with the same green fabric as his dino spikes for more candy support. 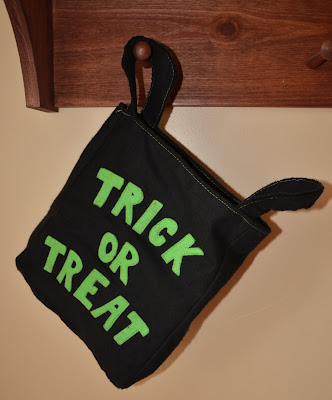 Well that's it for Halloween this year! Time to start thinking Christmas!!
(but in reality I've already been thinking about Christmas for a month now!!_)
at 2:50 PM

Email ThisBlogThis!Share to TwitterShare to FacebookShare to Pinterest
Catagories of Interest: Holidays, Stuff I've Made