It's been this kind of week for me in projectland: 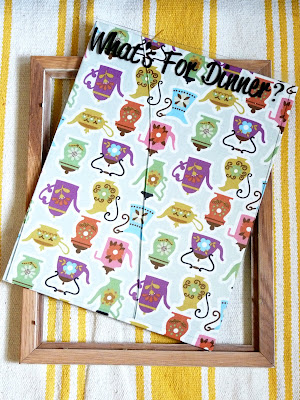 Instead of showing you my new cute menu board with my ridiculously awesome fabric, I have to show you a mess of a project where everything that could have gone wrong ---went wrong.
oh so wrong.
First, though you can't see it in the picture, the paint for the frame isn't really the right color. I painted it Ivory instead of white. It should be white. AND it's too cold to spraypaint. impatience made me do it anyway, so the frame isn't painted vary nice either.

I glued down the fabric to the backing without checking to make sure wrinkles weren't there. Sure enough there was a fold line right down the side of the fabric.

Next mistake. I assumed it was an 11x14" frame, though since I got it at DI, it wasn't--more like 10x12 or something like that {still too lazy to actually measure, esp now that it's broken.} I designed all my vinyl in Sure-Cuts-a-Lot on the computer assuming that it was for an 11x14 frame. So my letters were too big and I was either going to squish it in or re-cut all my vinyl. As you can see I decided to try the squishing approach. What you don't see is that when I was taking off the vinyl from the mat, I did it too quickly and the mat was extra sticky, I ended up ripping the words Thurs & Sat in half= would have had to re-cut them anyway!!

Not only that, but as I was putting on the vinyl, I noticed it was up-side-down! So i had to take it out and turn it around...
that's when the glass broke.
Now I have to start over completely!

Email ThisBlogThis!Share to TwitterShare to FacebookShare to Pinterest
Catagories of Interest: craft projects, Stuff I've Made