Guess there's a few things to catch up on. And seeing how this month is almost over it seems like a good time :)

First--Luke is walking all over the place! I'd say he's moved up to about 85% walking and 15% crawling. Really he only crawls when he falls down from walking. He pulls himself up and then walks, but I've seen him attempt to get up and walk from the middle of the floor--he loses his balance. It's pretty cute to see him walking around all the time. 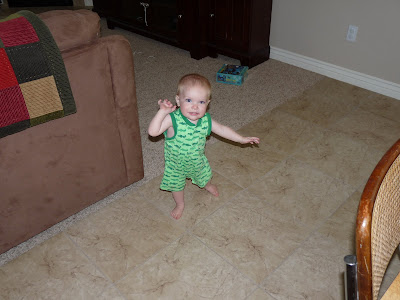 Secondly, Luke's new face--his "surprised" look or "uh-oh" in some cases. He makes it when he hears noises like cars, dogs or other "surprising" sounds. It's quite hilarious. 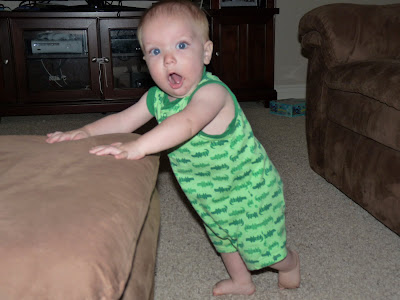 He also makes the face after knocking over blocks. See how he carefully knocks them down with his pointer finger... He loves pointing. 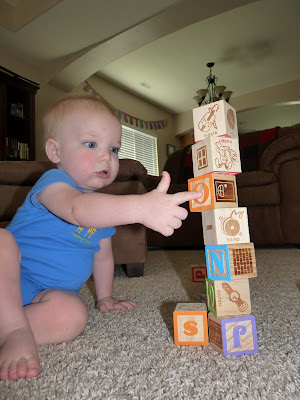 Enough about Luke...but can you really get enough? I have just a few more things to note:

I got a haircut. Last haircut = March 31. Oi. I forgot about the before picture but it was just long and straight and boring. Now I've got layers and it's a little bit shorter. Oh. and bangs. Although I regret them like I always do. 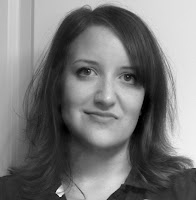 I made 2 big loaves and 5 mini loaves of zucchini bread from ONE zucchini. It's probably a good thing I didn't actually grow zucchini this year. I just collect them from others who have too many. I did grow too many squash though. My freezer will be stuffed! 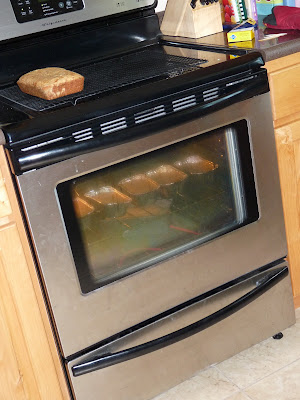 I got bored one morning and made these: 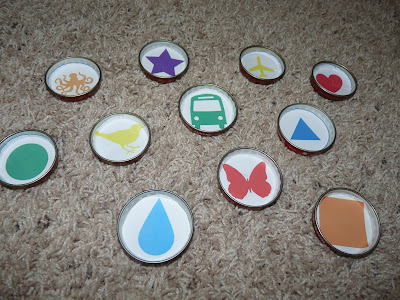 I got the idea and cut out pictures from HERE and put them in baby food jar lids I'd saved. I'm going to spray paint the lids a color, and then either laminate or just gloss paint over the paper pictures to protect them from baby slobber. But it was really easy and a cute idea!