Well I'm proud to say that I've been running fairly consistently since the beginning of MAY!!

I need new running shoes I've run so much. 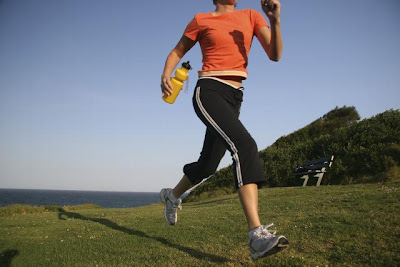 It's easier to run with someone (thanks, Katie!)--they help you run longer, not get bored as fast, and push you to go when you feel like dying because they aren't letting on that they are dying so you feel motivated to keep going because if they can do it you sure as heck can too :)

It may be more convenient (for me) to go in the morning right before Luke takes a nap because I haven't showered yet and being outside helps Luke sleep longer--BUT it's harder to run because I have to push the jogging stroller.

So we go at night after the kiddos are in bed most days--we can endure longer because it's easier, and run longer distances because we aren't pushing anything and don't have to worry about fussy babies.

Going in the evening is great too because us sun-haters don't have to fight sun-glare or summer temperatures.

It's also great to have a goal--we're running our firt 5k in August!! It's coming up quick! We can run about 2 miles and feel pretty good so we just have to make it that last mile and we'll be ready!!

And even after all that...I still hate running, and I probably always will, but at least I can run, and I run because I feel like I have to. So. I run.
at 7:00 AM

Email ThisBlogThis!Share to TwitterShare to FacebookShare to Pinterest
Catagories of Interest: Fitness