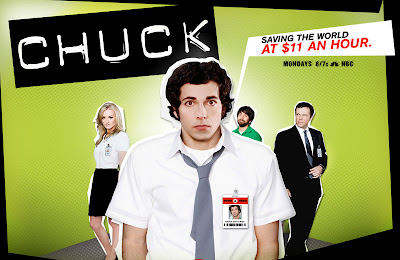 Does anyone watch Chuck on NBC?

"This dramedy centers around a computer geek named Chuck Bartowski who becomes the CIA's most important agent when he accidentally opens a top-secret email full of government secrets, which somehow downloads into his brain. Can the CIA protect him from terrorists before they can access the tremendous amount of government knowledge from Chuck's brain?"

Last year when Scott and I were trying to find a show we could watch we tried out Chuck. It's a little corny at times but I thought it was pretty funny and good to relax to after a long day at school.

The new season starts tonight!
at 1:06 AM