Our Trip To Orlando...

..was great, despite the rain-- 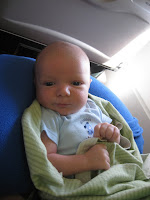 Luke was pretty easy on the plane--he slept the whole time and only cried when we were getting off for our layover in Denver because he was hungry. There was another couple sitting near us for both flights and they were BYU grads from 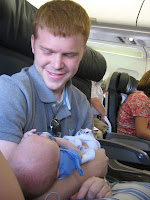 Provo with 3 kids--there youngest was the chunkiest little boy with the most beautiful blue eyes and eyelashes!! CUTE!! I think chunky babies are adorable!! So, plane was good, we played Sudoku together and took turns holding Luke who slept on a small travel pillow on our laps.
Orlando was rainy, rainy, rainy!!! It was somewhat of a bummer, but we managed to still do some of the things we wanted to do and had a great time anyway. Thursday we went to Animal Kingdom and it wasn't rainy (though SUPER humid, I can't believe how un-used to it I have gotten!!) in the morning, we went on the Dino ride and the safari--which was awesome because we saw TONS 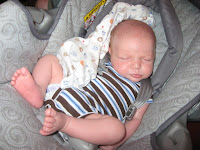 how Luke enjoyed Disney World
of animals that we didn't get to see 2 yrs ago when we went. When we had to feed Luke, we went to the Baby Care Center. There's one in every park and they are all a little different, but they all have a bunch of changing tables and somewhere to nurse your baby. We went to lunch at the Rainforest Cafe and then went and used our fast passes at the Everest roller coaster (my fav) it had just started to rain as we were getting out of lunch and so we rode the ride in the rain, which was kinda fun. There were 2 extra fast passes so Scott and I went again right after--by then it had really started to rain. It was so much fun though. However when we were done, Luke was really fussy and so we ran in the downpour to the baby center as he was screamin'. Not fun. We were completely drenched--except for luke who was well protected in his stroller. Then the baby center is air conditioned of course--so I was freezing. Scott went and bought me a big towel--but I was still kinda miserable. Needless to say we went home after that and took nice warm showers. 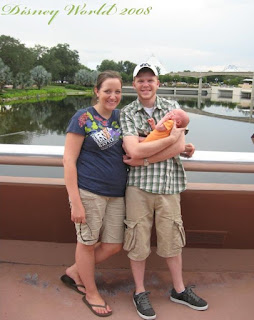 Friday we were supposed to go to the beach, but alas, it was rainy. Some of the fam still went, but Scott and I stayed behind. We went to the grocery store because each couple was assigned a night for dinner and Friday was ours. At the store though, we could buy whatever we wanted via his parents. So we got everything to make tacos and fruit pizzas for dessert and then any snacks we wanted, It was so fun to buy groceries on someone elses tab. We watched the Olympics and The Island also that day.

Then Saturday it was actually sunny so we all went to the beach condo they'd rented for 2 days and spent the time at the beach. It was really nice--the clouds started rolling in in the late afternoon, but it didn't actually rain until we were on our way home. Dinner was Papa Johns pizza and we spent the night watching Dan in Real Life on the huge 65 in plasma in the living room. 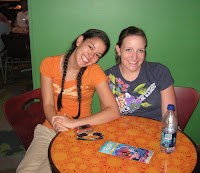 Then Sunday we went to Disney again. Started at Hollywood Studios and then went to Epcot. At Epcot Scott and I met my good friend, Nikki, who is interning at Disney World, at The Land and we rode a nice cool boat ride and chatted it up for a while. We had to leave to feed Luke, but then the Grandparents and the girls took Luke home and Scott and I went on a few rides on our own. 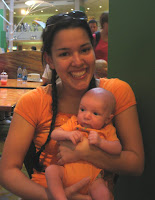 When we went back to The Lands to go on Soarin with our fast passes, we saw Nikki dressed up as her character!!! We were hoping she would come towards us, but she went the other way (she was working in a restaurant so we couldn't go in). It was still fun to stalk her though. We didn't get a picture cuz i ditched my camera with Luke, but It was fun to know that it was her under that costume!!

We got up really early on Monday to leave for UT, but we had a really good trip and were so glad we were able to go. If there's one very big thing that's important to both Scott and myself, it is spending time with family. And we're blessed to truly like spending time with each other's family as much as our own, too.

[The rest of the pictures from our trip will go up on Smugmug soon]
at 4:42 PM