I've done so many fun things this past week! There's no way I'll be able to expand on all of them but here's a list of what I've been up to:

Went biking with Al for the first time--I don't think I've been on a bike since I was 13! It was fun, but my tush is sore from the seat. We will definitely be going again, I may even ask for a bike for my b-day ;)

Went grocery shopping with Jen and the boys, but me and Charlie hung out and shopped with our own cart and Jen and Jack were shopping with their cart for other things. It was really fun. Charlie tried to convince me I needed mini colored marshmallows and lots of candy. I satisfied him when i bought myself gum. He did however get a little grumpy and upset when I told him I couldn't come over and play after grocery shopping--he kept coming up with "ideas" ex "we'll take you home, put stuff back (put my groceries away) and we come to my house and play!" there were many versions of this but after a lot of telling him I can't he eventually fell asleep in the car on the way back to my apartment ;) 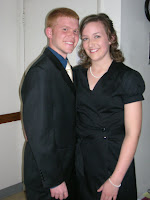 Went dress shopping for a nice dress to wear to Scott's family's ball. His Aunt Carol is putting it on and she's doing it in one of the ball rooms at the Joseph Smith Memorial Building in SLC. It's call the Celtic Spring Ball and I'm not sure why exactly she's doing it, but I know at one point they are honoring Scott's grandparents. I'm just happy to finally find a dress after the hours it took to find one--Scott was extremely happy to be done as well--he went with me and was extremely bored naturally ;)

Last weekend Scott and I had a date--which was nice because we'd been doing a lot of group things and ward things and haven't had a date just the 2 of us in a while. We dressed up nice and went to TGIFridays and then to a Divine Comedy show on campus. It was a great night.

The next Saturday, we played racquetball--a game I may never get the hang of fully, but I did seem to make some improvements...Scott had to work to gain a lead on me at least for the first 15-20 minutes of our first game. After his lead though I must've lost confidence or gotten tired because he totally creamed me.
I did however managed to actually beat him at ping-pong though!! Quite a feat, let me tell you!!! I gloated for a while before letting it go ;)

Went to breakfast at Kneaders with the girlz and Christopher Cole--he just wanted to come for the french toast. So it was 4 girls to 1. I just went for the food, but maybe I should have slept in. 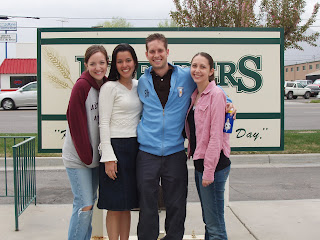