This party was fairly easy to throw together—especially with the help of my mom and hubby who helped me do all the decorating the night before! My mom blew up a ton of balloons—would have taken this breathless pregnant girl 10 times as long to do that! And hubby did all the climbing on step stools to reach the higher decorating (definitely a no no for me!)

There are so many great ideas on the web that it’s super easy to plan a great Lego party!  I even crossed off a bazillion things that weren’t needed (like a piñata) and the party still turned out perfect!

First here is the invitation-- I made this in Photoshop and printed them as 5x7 photos at Costco (cheap).  Luke had fun delivering them to his friends.

Here is the happy birthday boy and his little brother ;)  I made Luke’s shirt (you can find cheap t-shirts at Hobby Lobby or Walmart) using a freezer paper stencil and fabric paint (image at the end of post) 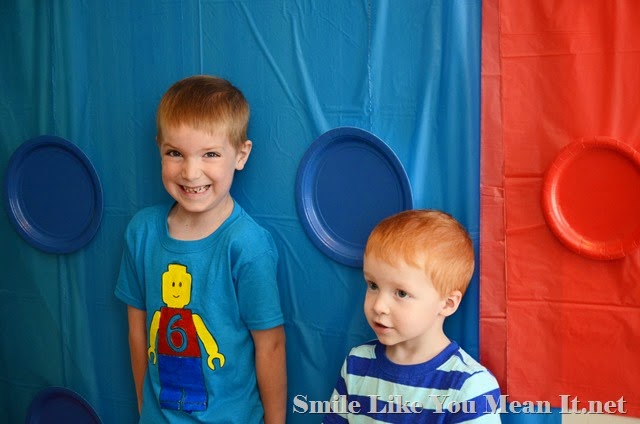 Party Favor Bags: cut out construction paper circles and attached them to these party bags (hobby lobby) for favor bags.  We filled them with Lego sugar cookies that I made and each kid got a Lego car kit, glow sticks and random candy.

Mega Bloks were used to make holders for the eating utensils, napkins and plates!

We used these printables (deliacreates) to cover juice boxes

I made Lego faces on my computer and cut them out using my vinyl cutter then I just stuck them on these yellow cups for popcorn (Luke LOVES popcorn!) (download below)

I made these sugar cookies (Our Best Bites) and used M&M’s to make them look like Lego Bricks.  Luke was a great helper sorting out all the colored M&M’s for me!

The Cake!!  I make the Lego bricks using melting chocolates (Wilton brand/ Wal-Mart or craft stores all carry them in lots of colors) and Lego molds (Amazon).   It took me a long time to figure out how I wanted his cake to look, but we settled with simple ;) Then, as usual, it took 2 days to make it and decorate it!

Hubby hang all these balloons and streamers for me!

I enlisted hubby to build Luke’s name out of Duplos for the mantle and then my mom blew up and hung all these balloons!

For one of our games just there on the side for whenever kids wanted to do it, I made this Lego Man bean bag toss. I covered a box in wrapping paper, cut out the Lego Head (image at end of post) on 12x12 scrapbook paper and then cut out his mouth.   I didn’t grab a picture of the Lego bean bags but they were super easy to make!  Just cut squares out of felt, hot glue them together, fill with rice and then glue on circle felt of the same color to make them look like Lego bricks.  Then play Feed the Lego Man :)

I made a crayon container with legos and printed off all kinds of Lego Coloring pages off the internet. Something to do waiting for all the kids to arrive.

Also had this table set up for kids to play and build whenever they wanted to.

We had a bunch of really easy games planned, but with the coloring pages and the table for building legos, the kids were pretty content.  We played just 2 games.  The first one we just see who could build the tallest tower without it falling over in 2 minutes!

The second game we had a bowl of 10 small Lego bricks and the kids had to carry them over one by one on a spoon to the empty bowl.  The team that gets them all over to the other side first wins! 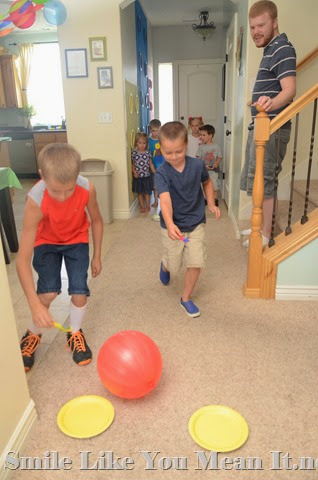 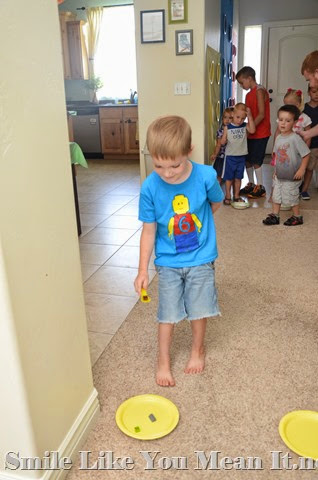 We had a pizza break in there since it was close to lunch time.

Then we opened presents

Then it was the long anticipated time for CAKE! As always, Luke was really excited about his cake. 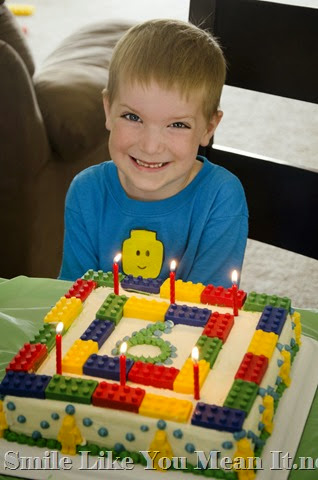 Lastly, I made kids take pictures in front of these giant Lego bricks I made out of dollar store table clothes and plates.

Here is one zoomed out to give a better idea of what they looked like.  They were hung up on the big wall in our front entry so it was the first thing people saw when they came in!

This was the best shot I got of all the friends and cousins that could come!  Notice that stinker Sam only let his legs make an appearance (far left).

I think this was the best and easiest party to put together that I’ve done so far!  I’m super happy with how it went and the kids had a lot of fun!  Thanks to everyone that could help out, attend and make it happen!
---------------------------------------
For those of you wanting some help with the cut outs here are the black silhouetted jpegs (see my printables tab for tips on downloading these to your computer)

Once saved to your computer, you should be able to use the “trace” option and cut them out with your vinyl cutter.  I use SCAL and a Cricut Expression and these worked great.

The Bean Bag toss Lego Head: one with the face and one without.  I cut it out of 12x12 yellow paper and then blackened in the eyes and eyebrows with marker. 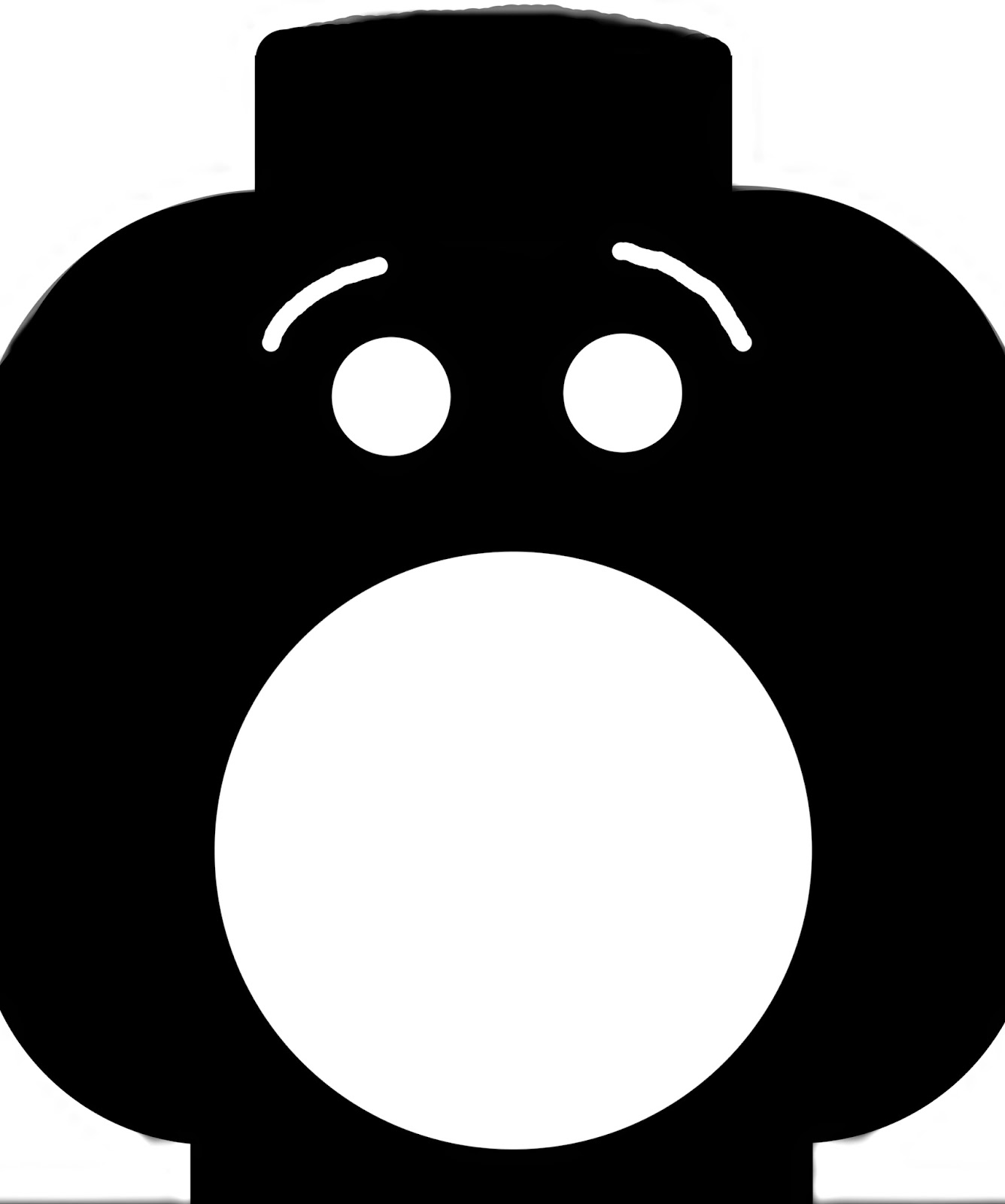 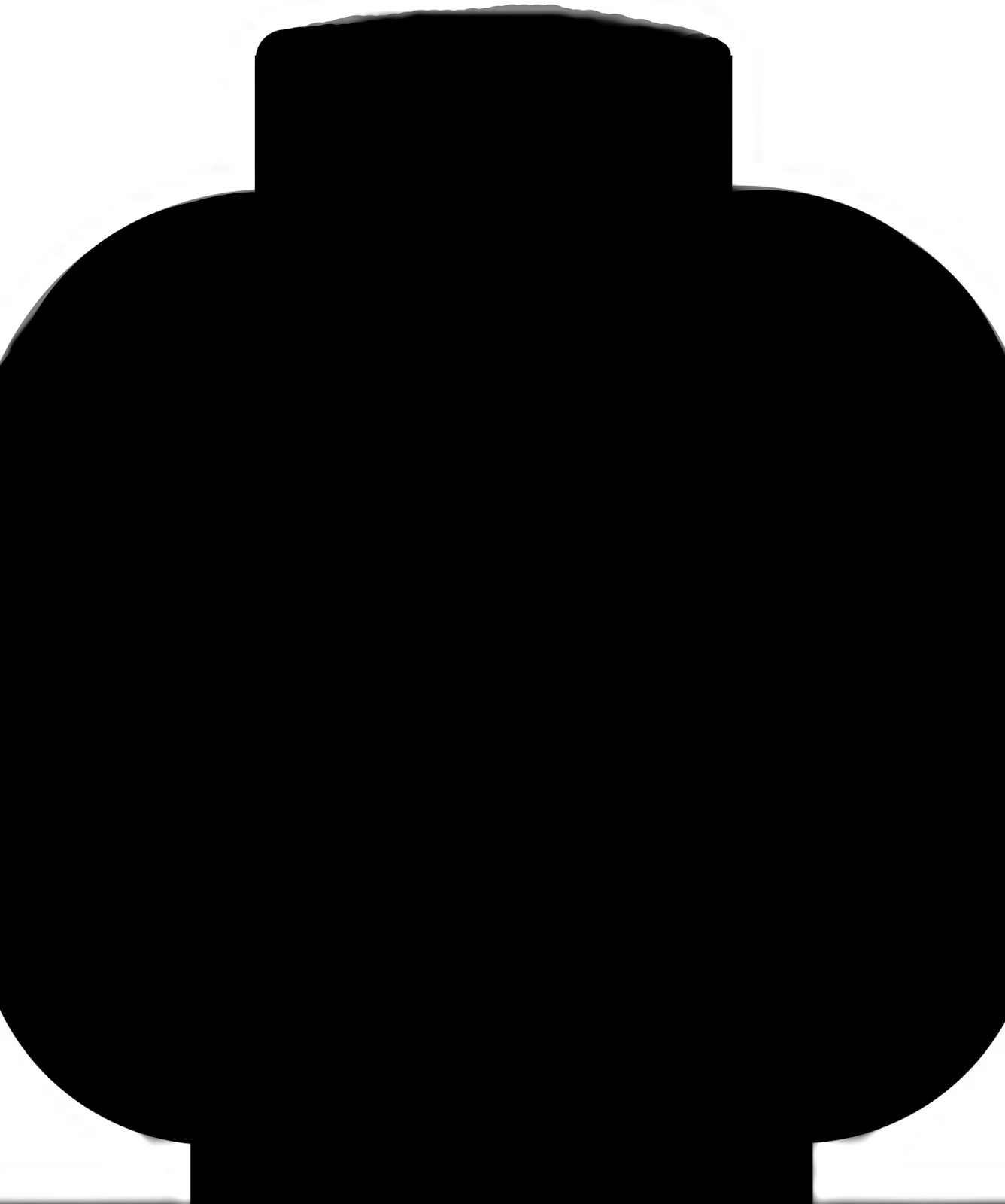 The faces for the cups

This is the image I made for Luke’s shirt.  Cut it out of freezer paper, ironed it on and then painted it with fabric paint.  One with a 6 (the one I used) and one without. 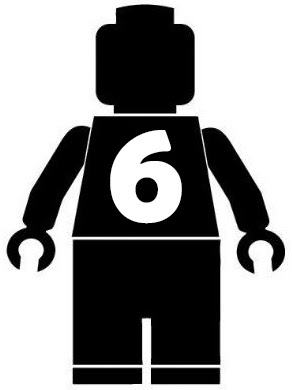 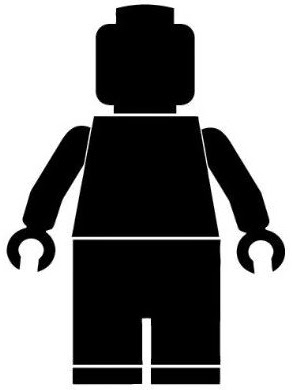 Email ThisBlogThis!Share to TwitterShare to FacebookShare to Pinterest
Catagories of Interest: Holidays, LUKE, Stuff I've Made