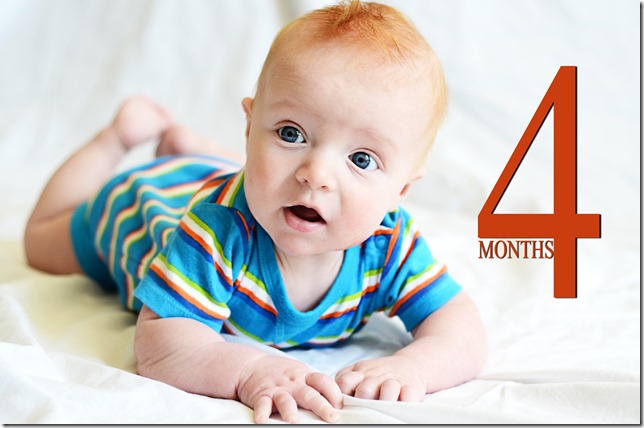 That’s a 1/3 of the way through his first year!

Since the last time I updated, Sam has learned a new trick!  He can roll over!  He started rolling on May 8th—he rolled from back to tummy six times that day!  Then he really wasn’t interested in doing his trick for a few days, but now I can’t get him to stop!  I’ve had to roll up a blanket to stick in his crib to keep him from rolling over at night because he gets stuck.  He forgets that he used to know how to roll from tummy to back. 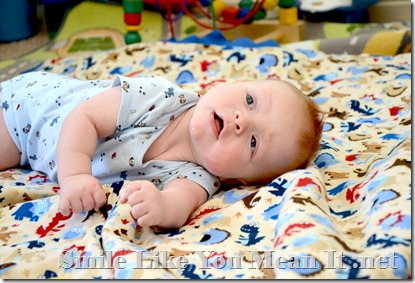 Rolling has been really good for getting rid of his Torticollis, however.  He rolls to the side where his weaker neck muscle is, so he has been strengthening it with is rolling! 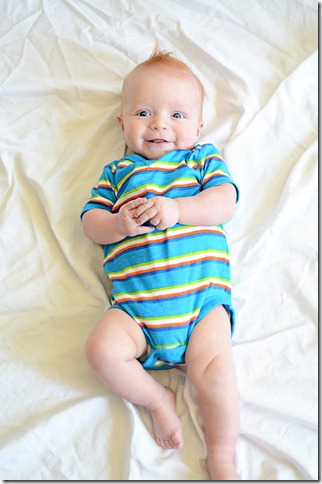 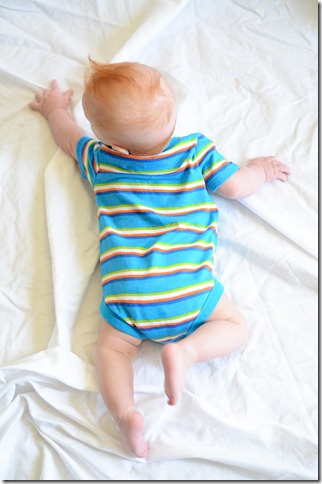 Speaking of Torticollis, I never did write about that.  Sam has Torticollis (you can read about what that is here).  I noticed right before his 2 month well check-up that he only turned his head to his left….ALL the time.  So I tried talking to him to get him to turn to look at me the other way and he wouldn’t.  So then I tried to force his head to his right and it was really tight and he hated me turning his head.  When I mentioned this to his pediatrician he told me it was called Torticollis and Sam’s case was bad enough to need a visit to a physical therapist.  Sam and I have been going to Physical Therapy with Mary at a Primary Children’s office in Sandy since then.  At our evaluation appointment I learned all about what Sam should and shouldn’t be doing, a whole bunch of stretches and exercises to do with him at home, and a bunch of ways to hold him and stretch him without him realizing that’s what I am doing for the times he doesn’t want to do his PT. We went for 4 weeks every week and then took a two week break and then went back…which was last week.  At that appointment Mary said that Sam’s been improving just the way they would like and expect for his age.  He’d also had a slight flat spot, but it’s pretty much gone now (and it wasn’t too noticeable anyway, but that is a major problem with Torticollis babies)  We don’t have to go back for a month and when we do it may be for the last time.  He has a lot less of a head tilt then he did when we started, but it’s still there and we’re working on that.  And he also still looks to his left a lot—but I’m thinking that’s mostly because he is used to doing that because he can fully turn his head the other way now with a gentle reminder and something interesting to look at ;)  Like I said before, the rolling he does and a TON of tummy time that he’s been getting since we started this whole thing has helped improve and reverse this condition…so Go Baby Sam, Go!

Other things Sam has been doing more of…

Eating, sucking, and gnawing on his hands…constantly!

He also sucks his thumb when he sleeps now! SO cute

Sleeping better during the day, and sometimes during the night.  We are trying to get night time sleeping under control but he’s still sporadic…some nights sleeping 4-6 hours at time and other nights waking up every 2 hours.  I can’t seem to figure out why that is.

He coos in a way that sounds like he’s talking back to you.

He blows bubbles and goes  Bubbbb & phewww all the time (those are words I made up…I can’t think of a better way to explain the sound!) 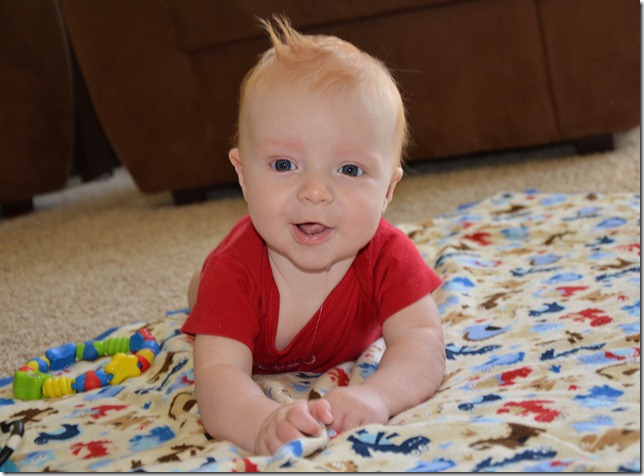 He is now interested in playing with Toys.  He loves the Lion Face Crinkle Taggy that I made for him. 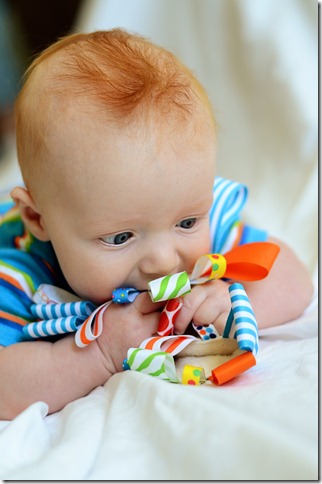 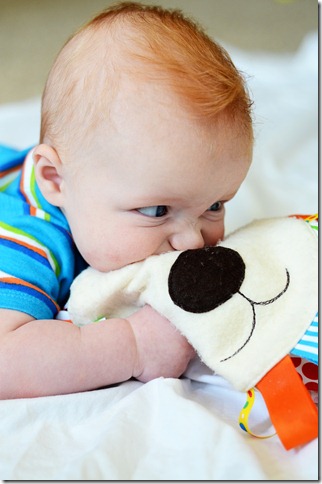 Interacting with Luke!  Luke can get him to smile and laugh! It totally melts my heart! 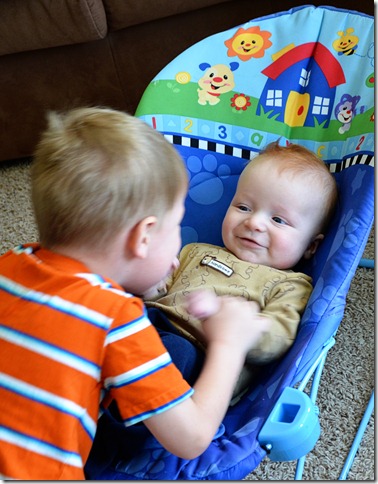 Sam can sometimes hold his own bottle!  Speaking of bottles…he totally prefers bottles to nursing, but we aren’t giving up on nursing yet! 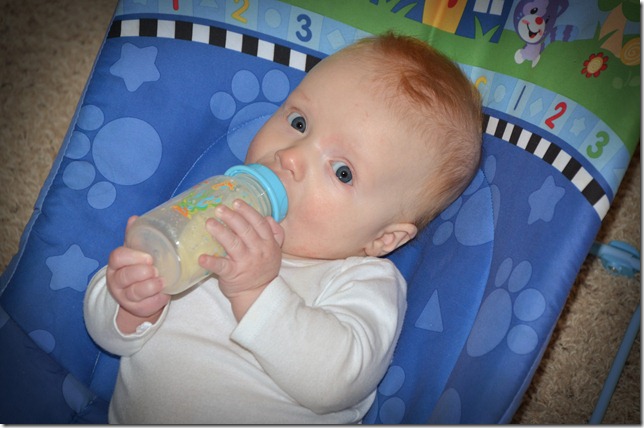 the “Swimmer” move.  He kicks and kicks his legs and “floats” on his tummy. 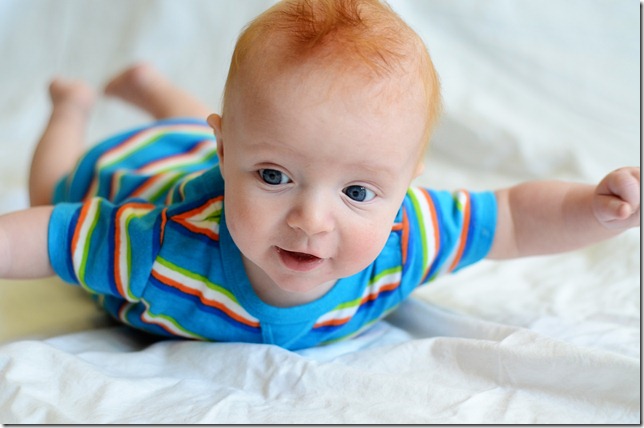 Sam is really really good at going from this: 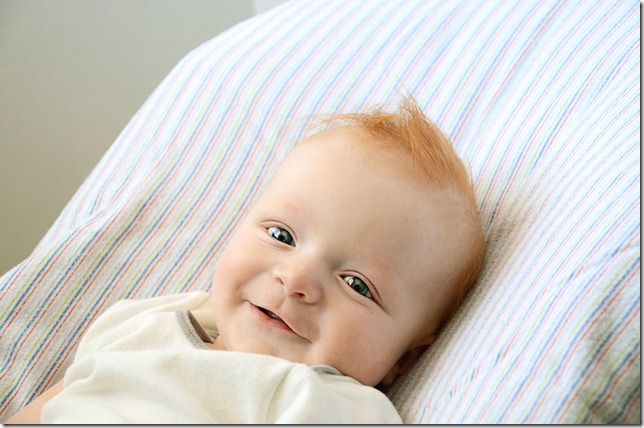 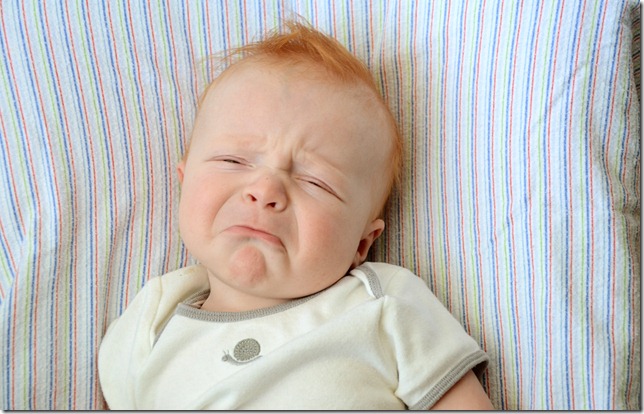 in no time flat.

He tries to get the animals (in this case dinosaurs) on the blanket.  It’s funny when he grabs at it and gets nothing but his own hands! 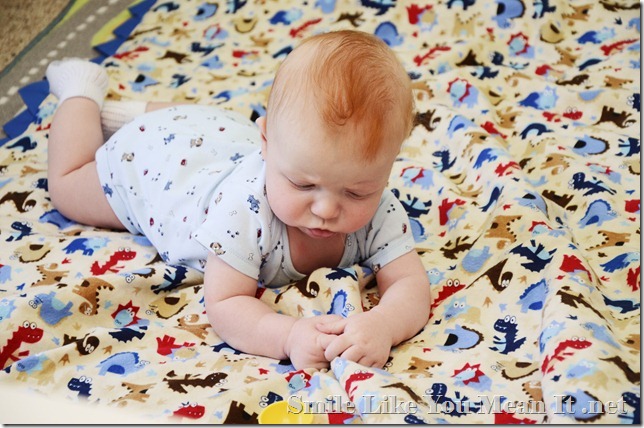 He can sit in the stroller without falling over too much.  He likes this because there’s more to see.  We have to take a lot of walks on his fussy days because he calms down when he’s outside. 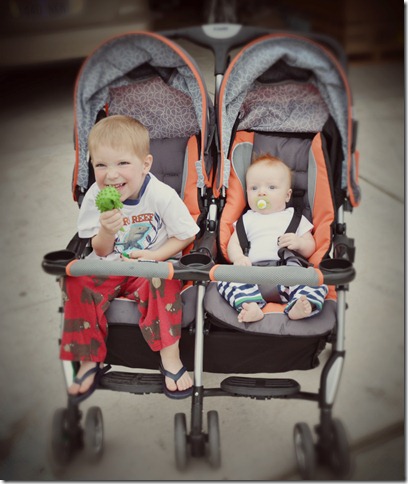 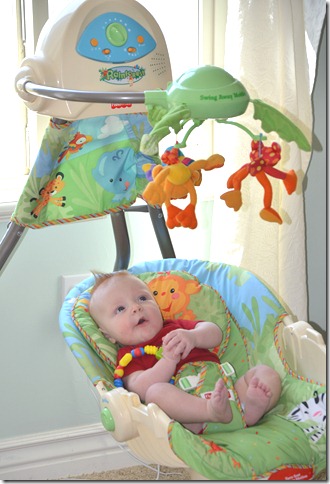 He’s overall a pretty good baby, and his cuteness makes up for the fussiness and sleeping difficulties we have to put up with sometimes! 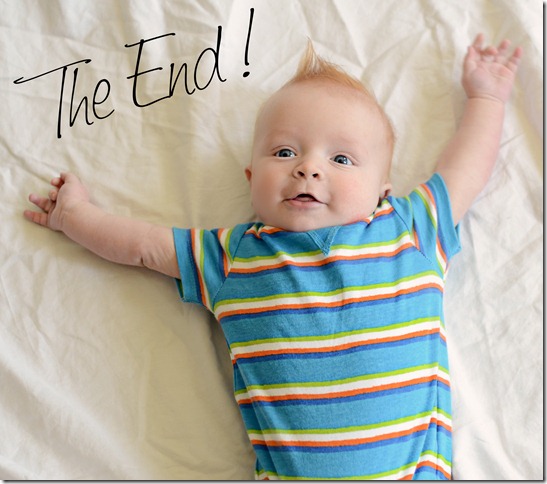