If you want it, Make it 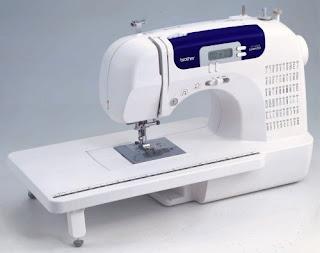 I pretend i do, but in all reality i hate it.

I love going to the fabric store, picking fabrics and buying patterns, I come up with all these grand ideas of things I could sew. I dream of all the possibilities...

I get home, shove all the supplies in the closet and don't touch them until I absolutely have nothing else better to do than sew something.

I have a box and a half of fabrics i got to make something. I can go through each fabric and tell you the idea I had or what I was going to do with it. And yet, they remain in the box until I decide to get ambitious.

I have a big stack of patterns of things i was going to sew or patterns I bought because I thought it was awesome--like making my own messenger bag. Most of them are still unopened.

Even the mending, something as simple as sewing the darn buttons on my favorite winter coat--I'd rather tough it out til spring and go without that coat than take the five minutes to sew the dumb button back on. I have a whole pile of need-to-fix clothes. *sigh*

Oh it's such a bad habit. I'm in love with the idea of sewing, but definitely not sewing itself. Whenever I start a project, if things are going quickly enough or I'm not understanding something, we're treading on dangerous waters...because If i don't figure it out I tend to throw it down and walk away....for months! I'm an impatient sewer. I like instant gratification. I need short simple projects so the likelihood of me actually completing them is greater. Unfortunately even the simplest of projects bug me if I mess something up or it's not looking the way I was thinking it should. When I lived at home, it was these projects I convinced my mom to finish for me because of my frustration and impatience. My mom is an excellent seamstress. and very patient with my sewing impatience.

It's really an unfortunate thing, because I have this thing that I won't buy something if I can make it myself. For a lot of things it works out just fine--like a lot of the crafts I see in the popular craft boutiques here. I see something and think, "I could make that" so I jot down the idea and don't buy the item. A lot of things that's just fine for...paper crafts, hair accessories, magnets...I often do come home and duplicate them at home. It's just those darn cute sewn projects I battle with. So easy, and yet so annoying that I rarely start the project simply because I'm overwhelmed by the lengthy sewing process itself. 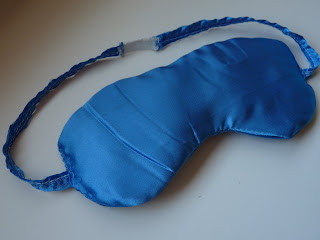 Anyway, "If you want it, Make it" came to mind this week. Every night Scott likes to read before bed. Even if we go to bed a lot later than usual, he still wants to read a chapter. I'm so tired, i just want to go straight to sleep. However, the lamp light keeps me from doing so--even at its measly 40 watts. I'm very sensitive to lighting. SO, to save our marriage, I decided to make an eye mask. I came up with the idea, decided it would be easy enough to attempt and create my own pattern, and I probably already had the materials to make one. And i did, and it was. I thought it would take me 1 hour TOPS. ha. I ended up making the first one, hating it because it was a little too small, and shabbily sewn together, and so I attempted another one. After several days and several times putting it down and walking away, the project was completed. It was highly motivating to get it done because of the actual NEED for it at night. It's by no means perfect looking, but it will get the job done.

*Whew* another sewing project checked off, I'm still alive, and my sewing machine is still intact.

the end of my sewing shpeal...at least until later this week because I'm teaching a basic sewing skills class for my Relief Society activity on Thursday night. oh the irony.
at 7:07 AM

Email ThisBlogThis!Share to TwitterShare to FacebookShare to Pinterest
Catagories of Interest: About Me, Stuff I've Made