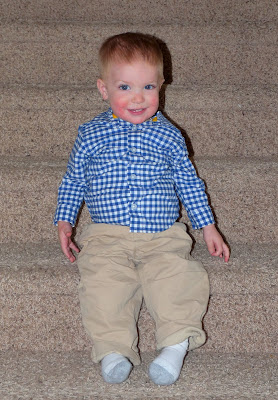 Today, Luke is 18 months old!!
It's been 6 months since our last update so there's lots to share
He has his 18 mo checkup on the 20th, but when i weighed him here at home he was about 22lbs (i'll update this later after the official stats). He's had a growth spurt over the last month and a half so he is actually wearing 18 month sizes like he should be! That's a first.

He is talking a LOT more these days.

He says (when he feels like it):
Uh-oh, cracker, quack-quack, meow, vroom (when playing with cars), momma (used sparingly), dadda, ow, wow, no-no, nummy-nummy, yay, awwww, tickle-tickle-tick, shoes, bzzz, outside, bebobebe (belly button), and various other language that sounds like German and Chinese.
He still uses sign language and learns more as I teach him. He signs: hungry, bath, more, "ask nicely", drink, phone, hat, bonk, light, up, down, all done, blow kisses, bye-bye, yes, no

He points to his nose, eyes, hair/head, belly button, tummy, fingers, toes, and sticks out his tongue.

He loves doing the motions for the itsy-bitsy spider, popcorn popping, and if you're happy and you know it songs.

He LOVES loves LOVES music. If i sing him a song he claps and says "YAY!" after I'm done. He'll do the same thing after one of his toys plays a song. He loves to dance to the music and is just naturally drawn to all music anywhere.

At nighttime, he still loves his bath and watching the water drain. After we get him all dressed he'll give the parent not putting him down for the night a hug and blows kisses as we leave.

He loves giving hugs and kisses and he likes to hug and pat our shoulder and then say "awwww" (probably because we do)--he hugs his stuffed animals and says awww and gently pats them. He also is fascinated with baby dolls (but only when he's at playgroup or with his girl cousins because we haven't bought him a baby).

He is fascinated with my toothbrush and gets upset when I don't give it to him when I'm getting ready. 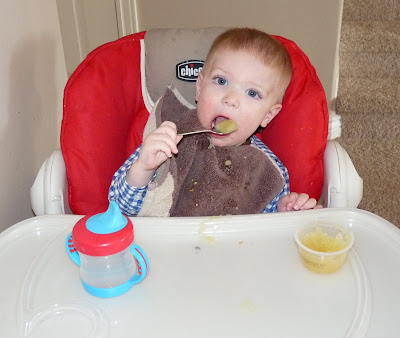 He's getting better with eating with forks and spoons and drinking from cups. All are a work in progress though...and very very messy.

There is SO so much he is doing these days, he is constantly doing new things, saying new things, and finding new ways to entertain himself. I've decided i LOVE the age between 12-18 months. It's my favorite age so far.

ALSO, today was his first day in Nursery!!! He was really tired because we now have church from 11 to 2pm and he usually takes his nap around noon...but we dropped him off and he was mostly fine. He did get sad after almost the whole sunday school hour and they brought him to us, but I took him back a few minutes later and he was fine the rest of the time. (though I checked on him several times!) I'd definitely say it was a SUCCESS! On a side note: I can't believe he's old enough to go to nursery! Jeez he's growing up so fast!
at 9:11 AM