Ah, the fourth. We started out by playing tennis with my brother Al & his wife Steph. We dropped off Luke with my mom & dad at my Grandma's house and then conveniently there are tennis courts at a park just a couple blocks down the street. It was a good game--and then Al & Scott played a few rounds on their own while Steph & I were kickin it in the shade and watched. Luke had a good time because he was pretty happy when we got back. We grabbed Lunch at Wendy's and then drove home to put Luke down for a nap. Scott worked outside on the yard and I cleaned up around the house and made some cookies. Luke took a 2.5 hour nap (his schedule was WAY off that weekend)

Around 5/5:30 we headed down to Springville to hang out at my sister's house while we waited 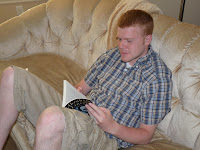 for everyone to show up for the BBQ. My mom was there & we played with my youngest nephew Isaac while Jen worked on dinner prep and Scott read a book on the couch. Everyone else--my dad, my oldest brother, my grandma, aunt & uncle (in town for the wedding) & their daughter's daughter, Ariel, and Jen's husband, Greg, and her other 2 boys Charlie & Jack AND al & Steph---all went out boating on Deer Creek Resouvior. We had to wait for them all to get back before we start the BBQ. But it was great--my dad made homemade rootbeer & Jen made a-mazing burgers among other yumm-o foods.

We opted to skip fireworks this year. We put Luke to bed and watched a movie. I didnt really miss it that much either. We did have some friends say they climbed up on their roof and they could see them all over the valley--maybe we'll try that next year. But maybe not. I must have been pretty tired because apparently people in the neighborhood behind our house were shooting off stuff around 11:30 and I didn't even flinch awake at all.
Luke & his cousin Isaac 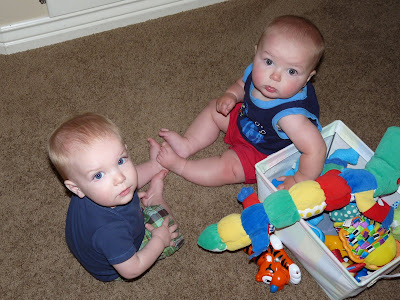 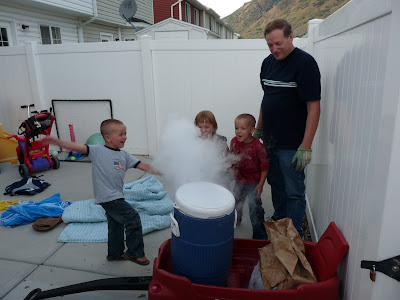 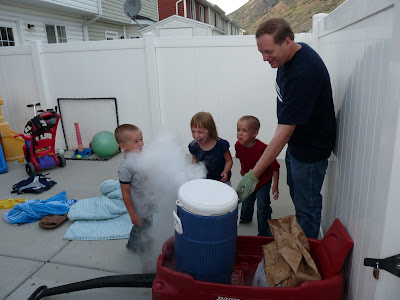 Playing with his cousin Jack 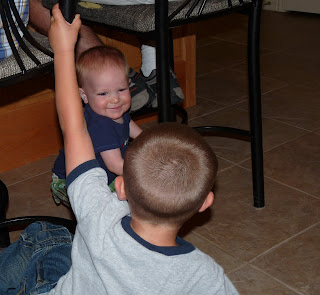 Luke begging Steph for food. AFTER, he'd already eaten a ton on his own. As always. 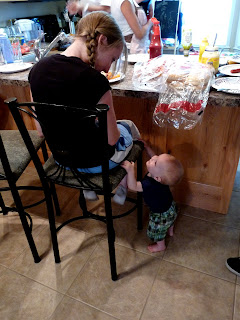 Luke enjoyed Isaac's walker toy. He pushed it around and around in a circle 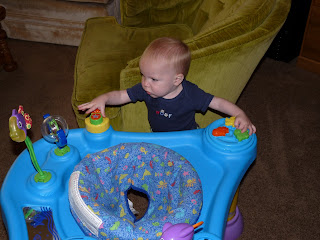