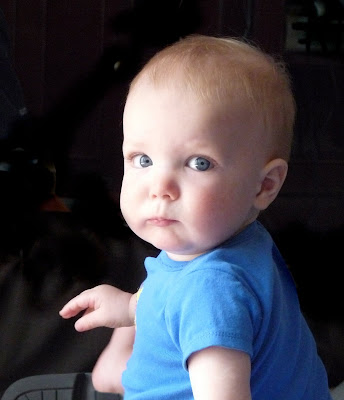 Unbelievable. OnLy 2 months til a YEAR! 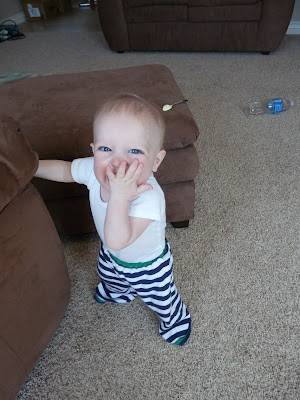 We've accomplished a lot in the last month!

Luke is a pro at turning off light switches. We just hold him up to it and he uses his little finger to flip it down.

Luke can clap his hands! "YAY! CLAPPING" and he even started doing it when I started singing "if you're happy and you know it clap your hands!" This is his favorite thing to do so it's harder to get him to say or do his other tricks because he likes this one so much. 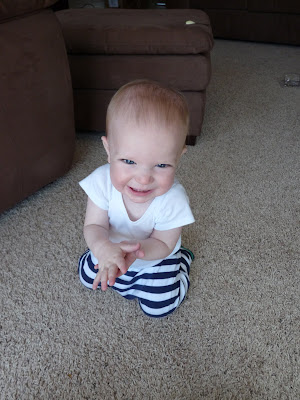 He also started waving ByeBye--every day we see daddy off at the garage door and wave byebye--he finally has started doing it on his own!

Luke has been exploring the house more...he knows where to look if mommy leaves the room--he'll crawl down the hall and find me in the bedroom or the laundry room, but he often crawls to and looks for me in the kitchen.

Luke has 4 teeth now. He sprouted 4th one just in the last week.

Luke eats a lot. He likes it best though when he can feed himself. I have an awesome video of him using the spoon himself for the first time--but it's on the camcorder. thus, you must wait. 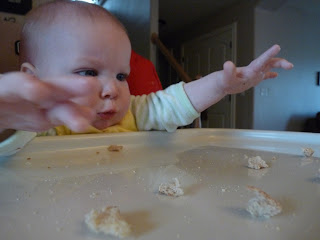 Luke loves being outside, feeling the wind and likes to go for walks or runs in the jogging stroller.

Luke can drink from a cup and is figuring out how to suck from a sippy cup or a water bottle. He never took a bottle, so he has to learn that you are supposed to actually suck from a sippy cup to get stuff out. I think he just needs a cup with a sippy topper that doesn't require actual sucking, just sipping.

Luke is pretty comfortable around others--even for long periods of time, but as soon as he sees mommy he is relentless and goes crazy to be held by me.

Luke is gaining more balance and is creeping along furniture.

he is quite the chatterbox. he also likes to yell just to yell. It makes going to church oh. so. fun.

He's starting to climb on everything. 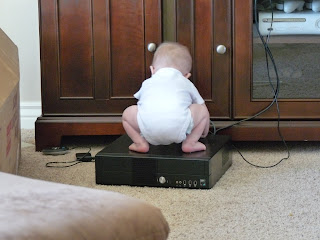 (sorry hubby--too funny, at least the case was on :)

Sometimes he gets stuck: 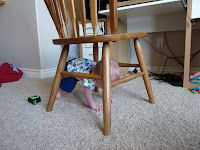 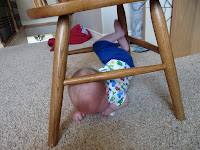 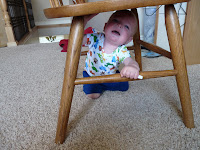 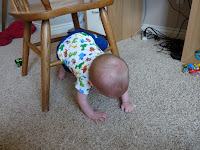 Luke is sleeping through the night (11.5-12 hours) without waking up most nights now. He occasionally still wakes up around 4:30/5:oo and cries for a while, but I no longer go to him. He usually goes back to sleep after 20 minutes or so. He wakes me up around 6:50am on average.
We've also got him taking pretty regular naps now so all those months of hard work and sleep training is finally paying off. 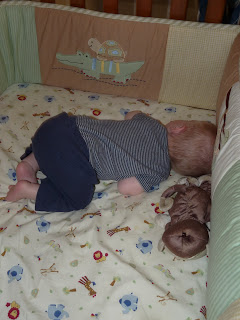 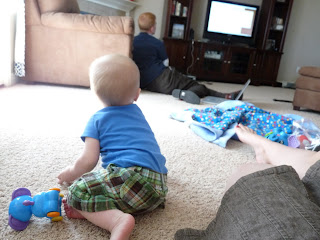 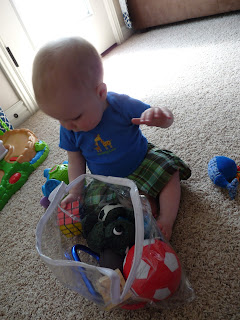 Always a domino in hand. 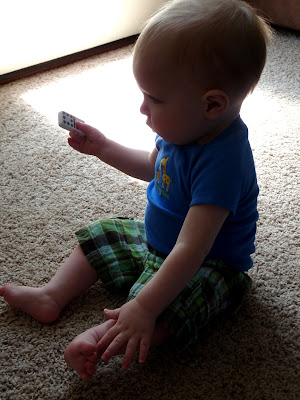 That's all this month!
I think I might have to do a "video day" once a week or something...we have TONS of videos, it's just hard to get them up online. Pictures will just have to do.
at 1:18 PM