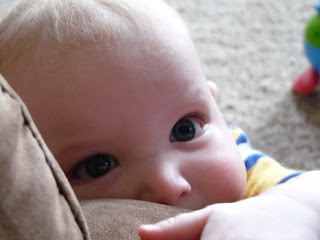 He's slowwwwly growing. He's finally made it into the 6-9 month onesies, though most of his 3 mo size clothes still fit him perfectly, and a most 6 mo sizes are still too big.

Favorite things/ Pastimes:
Paper, remotes, turning on the XBOX with the controller, crawling over to the tile and banging on it or slapping it with his hand. Crawling under the table to scavenge for food particles, banging anything that will make a noise, blowing raspberries, finding paper, eating paper, scratching at different textures, going on walks facing forward, sitting in the shopping cart without his carseat-carrier, demanding to eat whatever mom and dad are eating, splashing in the tub, "talking" on the phone makes him laugh, he laughs at sneezing or when he coughs, he loves chasing dad around the couch or ottoman, he loves finding wires to tangle up and play with.

Luke is pretty easy to get to bed (he's usually pretty worn out and ready), but we're (or rather I) am working on getting him to sleep longer at night. His longest stretch was from 6:30p to 6 am but it turned out to be because he was sick--so his real longest stretch was from 6:15p to 4:30am and then he went back to sleep until almost 8am. Our goal is to go from 6:30p to 7a. without needing mom (meaning if he wakes up he goes back to sleep fairly quickly). We'll get there.

Luke has 2 little teeth on the bottom--they came in February. Still wondering when the two top teeth will make their debue. 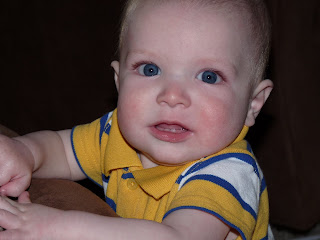 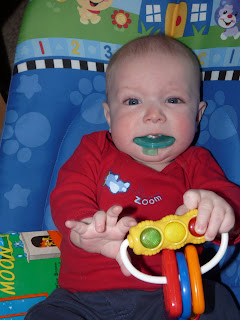 Sporting his green knit hat that his Grandma (my mom) made for him. Sitting on the little froggy quilt that GG Hughes made for him (my grandma) 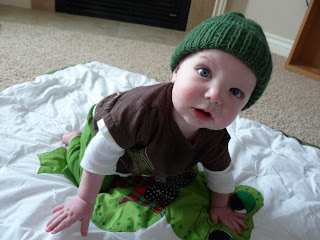 just crawling around saying "ma ma ma ma" and smacking my lips. He doesn't ever say Ma Ma in reference to me-- despite my best effort. 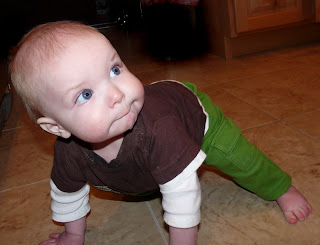 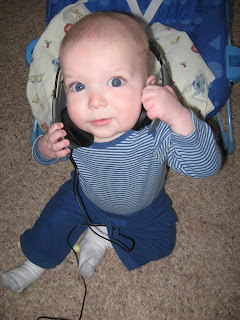 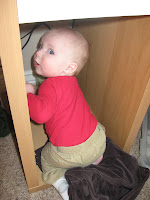 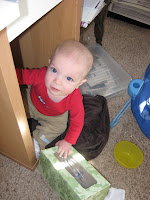 This is probably the face expressing either tiredness or disgust at the bright sun or a combo of both. 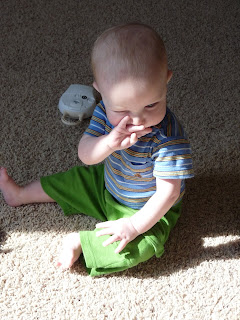 Luke likes pulling down all the games from the shelf. Luke LOVES paper and will find it FAST--here he found the instructions to a game that someone didn't put back in the box. I suppose we should relocate our games...it's only a matter of time til he figures out how to open the boxes. 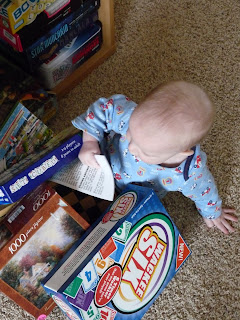 Snacktime is awesome because he's actually allowed to put things in his mouth, & it keeps those little fingers busy so mom can get things done! He's trying to eat it all quick before his alligator gets it! 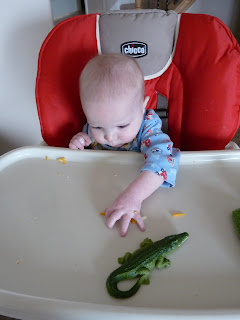 He really loves to be around Scott whenever he's home. 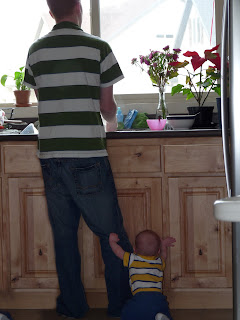 Still ventures away now and then to check out what's new. He likes the springy doorstoppers. 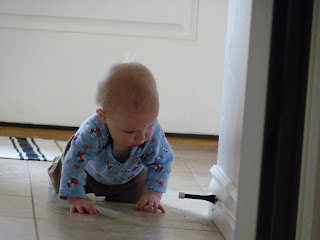 Looking for interesting things on the entertainment center--going for the XBOX controller here. He started pulling up to stand half-way through February. 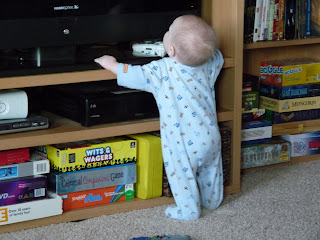