Unfortunately that means my parents and my oldest brother Andrew have flown back home and I'll miss having the company in this big ol house.
Christmas Eve
We spent the evening at my Dad's parents house. Andrew read the Christmas story and then we went around the table and talked about our various Christmas memories from the past. Then we all watched The Ultimate Gift and ate goodies. Luke was sleeping in the back room nearly the entire time. I finished sewing Scott's stocking by hand as I watched the movie. It started snowing as we left for home. 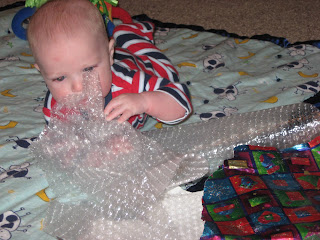 At around 3:30am after I finished with Luke, I filled our stockings with presents and goodies and finished adding presents to the tree before sneaking back to bed.
Luke woke me up nice and early at 6:30a and I put him in the bouncer and let him watch me make muffins and orange juice. When Scott woke up, He and I opened a bunch of presents from his parents and to each other. We video tapes Luke opening a present and then getting fascinated with the paper and bubble wrap instead of the gift ;) We saved a bunch of presents for later too, but we just had to open presents in the morning--we just couldn't wait!
Late 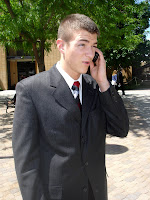 r, Everyone started arriving and the kitchen started getting busy busy! The oven was probably on for most of the day! We had my Grandparents, and all my siblings over for Christmas. Everyone was here by 11:30 and my younger brother Steve, who is on a mission in Germany--currently in Cologne--called about 11am and talked to us for 120 minutes (according to our phone) Everyone took turns talking and listening (we were using 2 phones) until his time was up. Meanwhile the kitchen was busy and those not cooking were playing XBOX games or talking to Steve.
We meant to have dinner around 2, but when Jen and I were upstairs in Luke's room feeding our babies, Jack (Jen's 3 year old) kept coming and asking us to come open presents. We kept sending him away but he kept coming back--a few minutes later we hear Greg (Jen's husband) yell up the stairs, "Are you coming?! We want to open presents!" Doh. Well, never send a 3 yr old to come get you to open presents!! So we opened presents while we waited for some of the food to finish cooking. And then we feasted!
My Grandparents left before it got too dark, but everyone else stayed and we played games, ate pie, and chatted until late.