I haven't done an update forever!  I've been writing a bunch of things down, though to keep a list of all the cute things Ruby is up to lately! 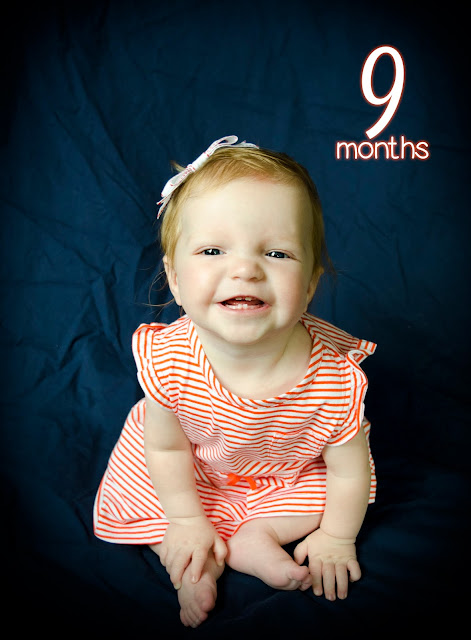 Ruby is sleeping 11 hours at night. She wakes up occasionally and can't back to sleep without a little help, but those days are less and less.  She gets up between 6 and 6:30 every morning.  She usually naps 30 minutes twice a day.  If I'm lucky one of her naps will be 1hr 15 minutes and if I'm REALLY lucky it will be 2 hours.  But I can count those 2 hour naps on one hand...

She FINALLY takes a bottle!  She only drinks 2-3 oz at a time, but she loves them and welcomes them when they are offered.  A drastic change from the screaming she used to do at the mere sight of a bottle coming near her mouth.

Ruby can sit up on her own for short periods, but she mostly leans way forward and then flops to her face/stomach so she can crawl away.  Ruby army crawls, but she over propels herself and kind of uses her face in the process.  She has no trouble getting where she wants with her army crawling and rolling.  She sees something she wants and goes for it.
She's happy to play for long periods in the living room if the boys are nearby or watching TV.
She often is on her tummy and waves her arms and kicks wildly like she's swimming when she is excited or mad-sad.
She shakes her head no.  Sometimes she really means it and other times she is just being silly.
She likes being held outward and pushes away from you if you hold her inward.  But she does get snuggly sometimes and wants to lay her head on your shoulder as you hold her inward.

Ruby loves when Mommy sings to her.
She loves toys that make noise and banging toys together and on the tile to make loud noises.
She loves really annoying sing-a-long type Netflix shows.
She can clap her hands! It is the cutest thing. She's starting to catch on to Bye-bye. 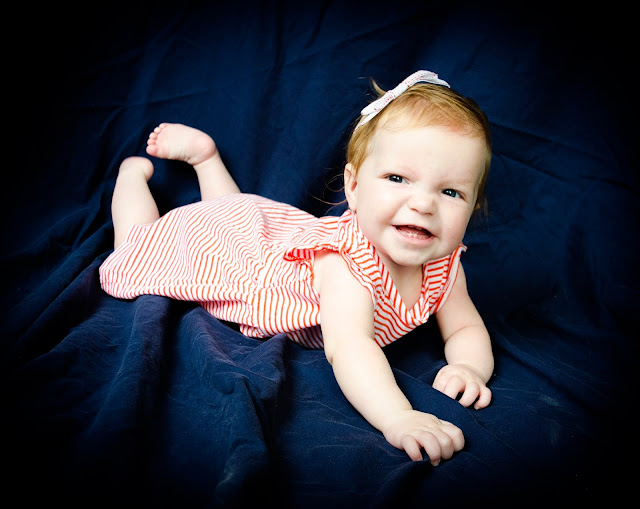 She loves drinking from cups!
She loves REAL food.  She tolerates purees but she loves self-feeding.  Especially avocados.
She babbles a lot.  Dadada, bababa, mamama, yayaya, etc.
She screams...loud.  She also has lots of cute girly squeals
Hate the grass; Loves the wind
Loves Peek-a-Boo

She has the cutest cheeser smile. Wrinkles her nose a lot.
She has a lot of sniffing and grunty sounds that she makes.  They are silly and we love them.
She has 6 teeth now.
She is not a happy baby when she's getting a tooth.

Ruby is at a super fun age and she's lots of fun most of the time! 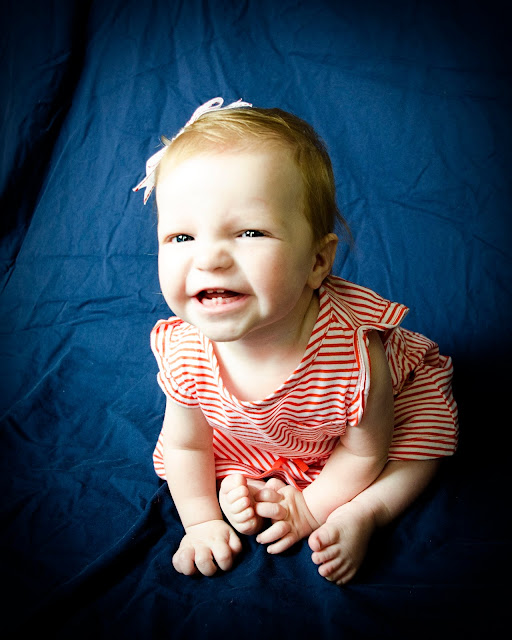 Email ThisBlogThis!Share to TwitterShare to FacebookShare to Pinterest
Catagories of Interest: Ruby Kate