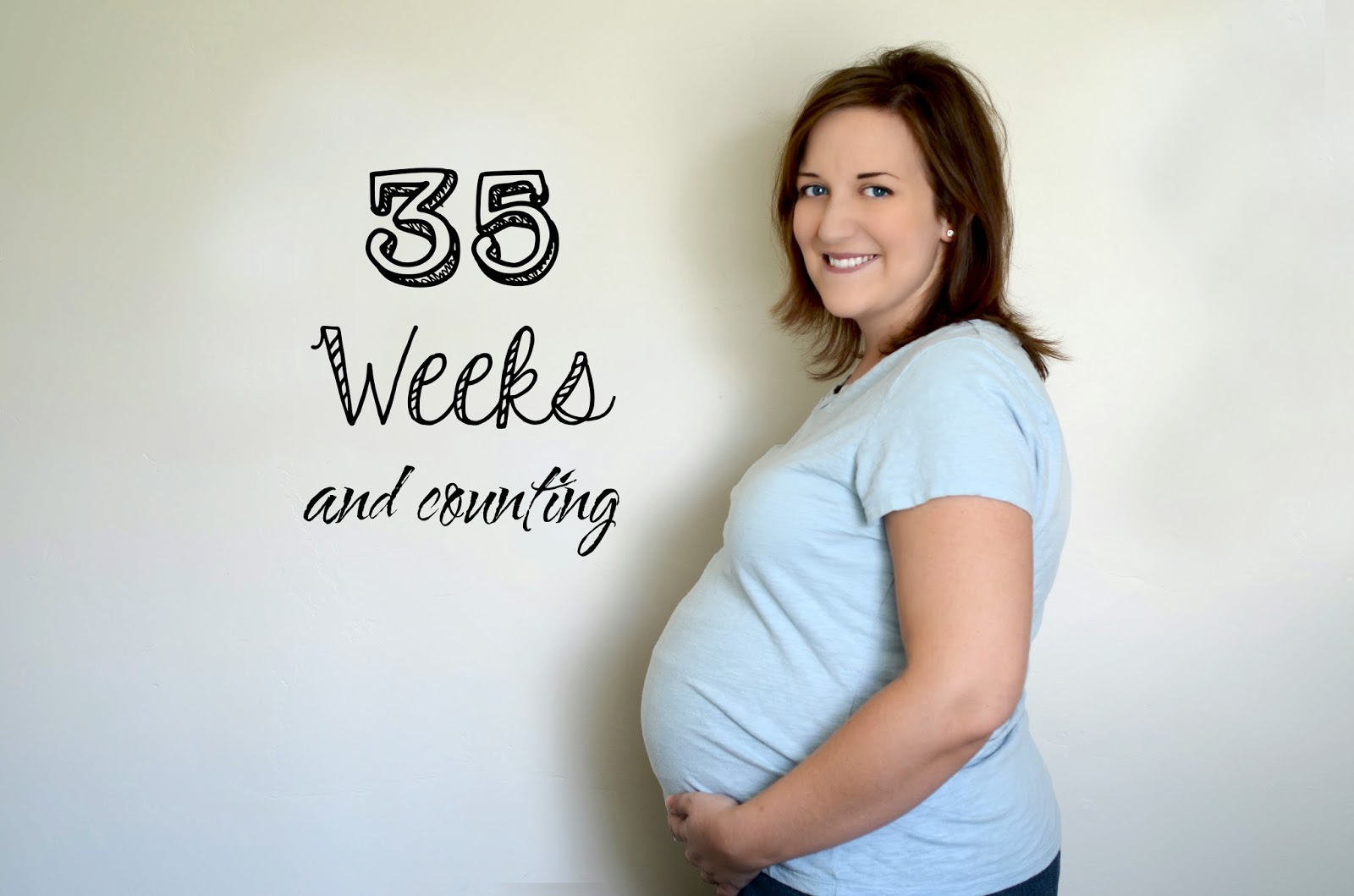 This picture was taken last Friday (8-29-14) If I waited to post this for a picture of this current week--It'd never get done! So really I'm 36 weeks (37 on Friday).  This was my first photo this entire pregnancy of the baby bump!  I'm such a procrastinator!

I haven't really talked much about my pregnancy this time around!  In fact, you may have missed the "announcement" post because I didn't add it to the blog until several months later.


I'm most definitely coming to the end of this pregnancy--I can't believe it's here already! This year has just flown by so fast!  While I'm really nervous to have a third baby and implement all the new changes that a new baby brings, I'm extremely excited to meet this little girl!  I have been sewing up a storm and trying to get everything ready for her arrival.

My official due date is October 3rd, but it's looking a little more likely with every appointment that she may come early. There have been some concerns throughout this pregnancy that has had me a little stressed out at times.

At the beginning of this pregnancy I never got morning sickness (lucky!) but it led me to think that I wasn't really pregnant or something was wrong.  I got a few severe colds, including a case of Strep, in February and March and I was pretty much a sleeping zombie all the time--many naps were taken in the afternoons.

Come mid-May, we finally had our 20 weeks ultrasound and found out that we were having a girl!  Of course, that seemed too good to be true (and still does sometimes) so I made them check when I had another ultrasound at 28 weeks (around mid-July) . The main reason for a second ultrasound was to check on the placenta previa that was discovered during the 20 wk ultrasound.  It had moved up but not completely out of the way, so yet another ultrasound was made for August.  By that ultrasound, the placenta was just low-lying--my doctor was no longer worried about it.  However, the baby was measuring smaller than what was considered normal.  I scheduled yet another ultrasound for about the time I would be 37 weeks (which is on this Wednesday 9-10-14) which I think will tell us if she is indeed growing at an acceptable rate. If she's not, then there's a chance I may need to be induced early to give her a better chance to grow outside of me.  The goal is to get as far along as possible, but keep a close eye on her growth.  I've been doing Non-Stress Tests to check her heart rate as she moves around in there and so far those look awesome.  Basically, I'm just trying to be prepared early and get the house ready for her arrival whenever that may be!

Lets compare about this time in Sam's Pregnancy: 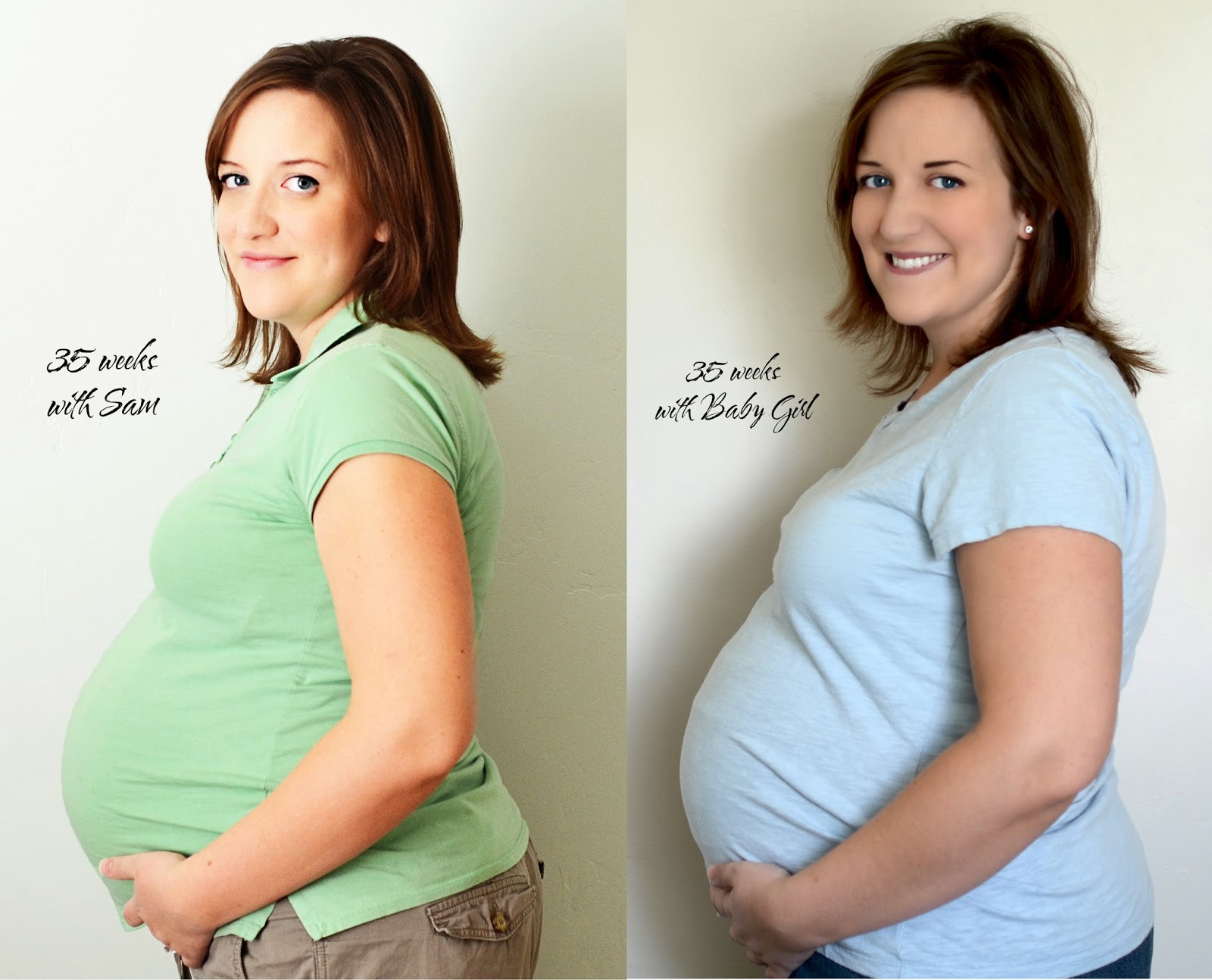 I thought this was interesting because looking at it I look about the same.  Yet when they measure my tummy they say I'm on the small side and they never said that when I was pregnant with Sam. Sam turned out to be 11 lbs at birth.  I'm hoping baby girl will be a nice average weight, but I guess I will just have to wait and see.  I have lots of cute newborn size baby girl clothes that I will be very disappointed if I don't get to use--we had to skip that size for Sam :(

Such a difference a camera makes!  We didn't have our DSLR when Luke was a baby and there's a huge quality difference!

Wish me luck getting through the next few weeks--I'm SO tired now I can't imagine how tired I'm going to be once she's here and I'm up all night :P
at 5:24 PM

Email ThisBlogThis!Share to TwitterShare to FacebookShare to Pinterest
Catagories of Interest: baby