A two hour drive to San Diego should have been no big deal, but the boys were tired and Sam still wasn’t feeling very good.  Luke fell asleep after the first hour.  Sam held out longer, but eventually gave in.  Unfortunately, he kept waking up and didn’t sleep longer than 20 minutes at a time.  It seemed to take forever to get to our next hotel, but we got there eventually enjoying the view of the ocean from the windows along the way.

The set up of this hotel wasn’t nearly ideal as we were hoping, but we had to make it work.  The boys’ room was in the front where the air conditioner was, and the air never seemed to reach just 10 ft beyond that into our room.  So basically the boys froze while Scott and I roasted even though we were just a few feet apart!

The boys did have bunk beds and Luke thought that was pretty awesome.  Surprisingly, Sam chose to sleep in the bunk bed, too.  I brought a dark sheet with me to create a cave like “room” for him on the bottom bunk—I think it helped keep him warmer, too.

I turned on a show for him on the laptop while we tried to unpack and get organized before turning in for the night. 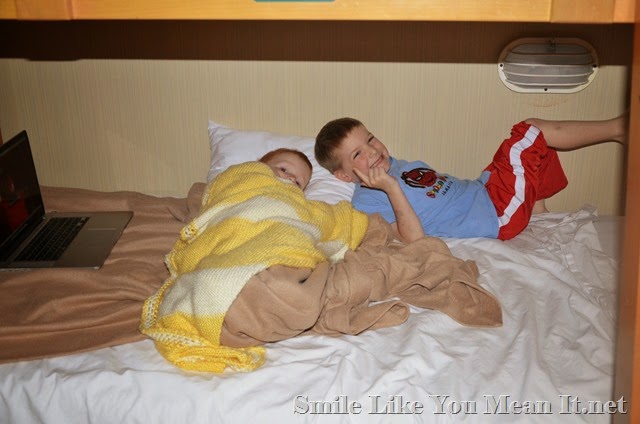 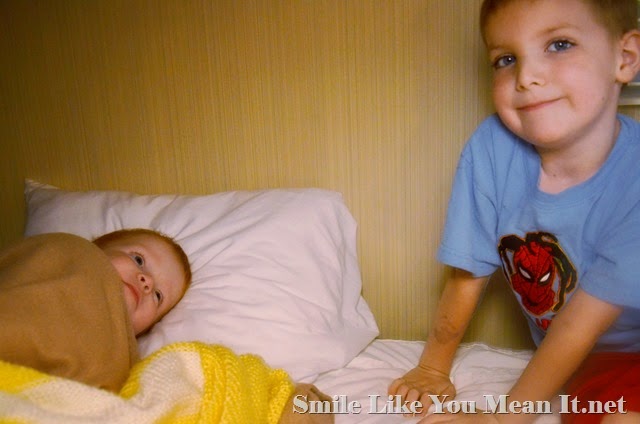 Scott and I really enjoyed the zoo even if Sam was not that into it. 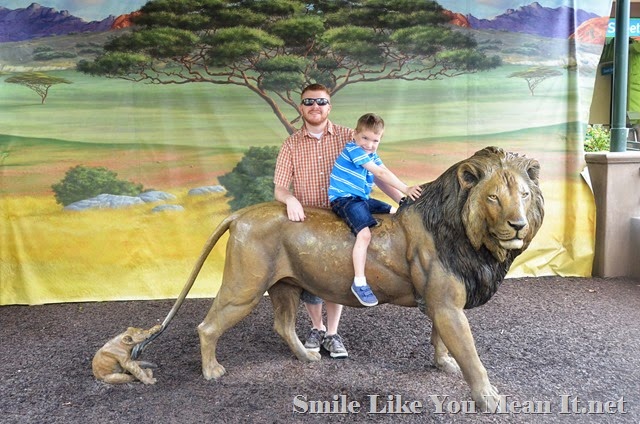 We started off the morning with the bus tour which turned out to be the best idea.  We saw lots of the main animals—big cats, zebras, lions, elephants, giraffes, etc and they were pretty active since it was a cool morning.  It was a great plan because the zoo is so huge that we didn’t make it back to many of those animals for a closer look later and would have missed them otherwise.

After the bus tour we found some turtles and fish and a few hippos along the way to the tiger and panda. 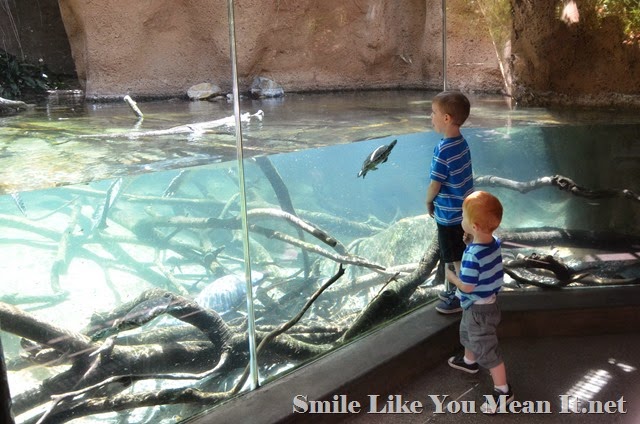 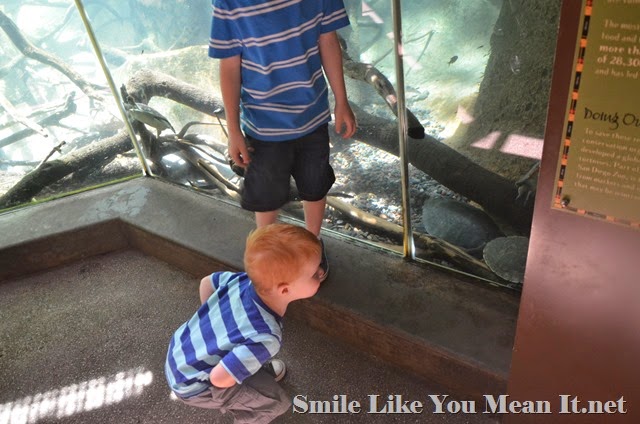 It was pretty lucky that the tiger was sitting right next to the window when we got there—but it was pretty crowded and there were a few annoying adults who never moved the entire time.  They were hogging the best spots and wouldn’t let the little kids in.  I did manage to snap this picture of Luke by the Tiger, though. 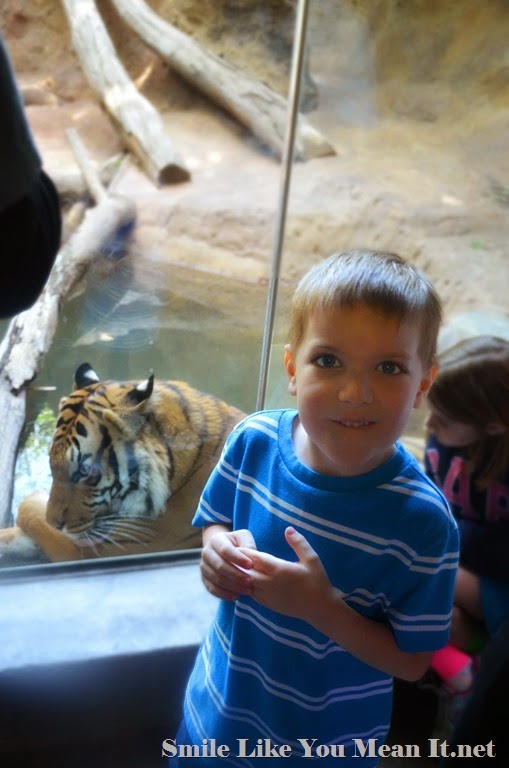 We LOVED watching the Pandas.  This Panda was just chillin’ there eatin’ his bamboo.  Looked pretty relaxing to me! 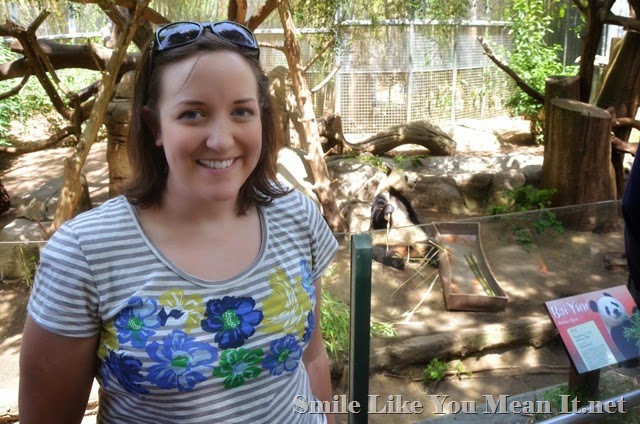 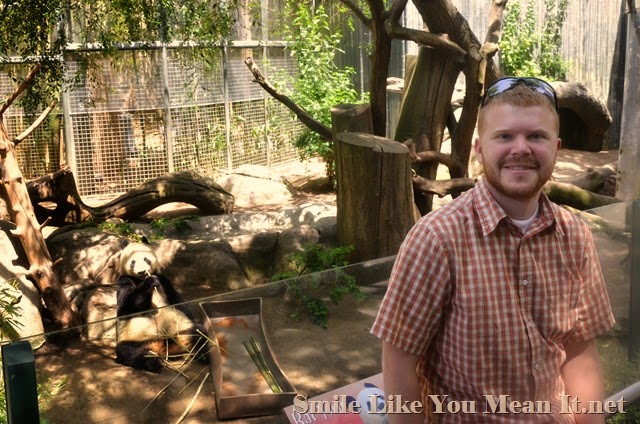 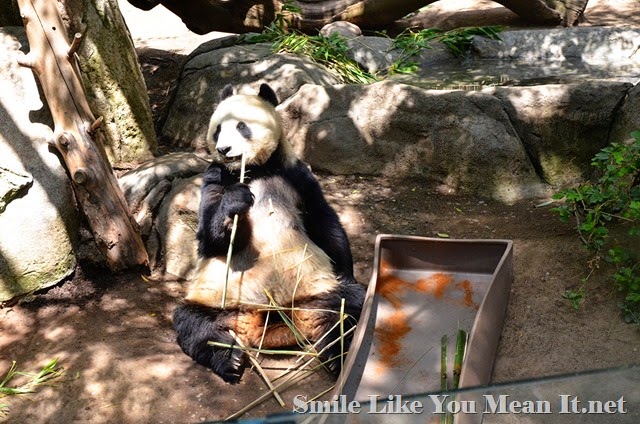 The baby panda moved around a lot and it was really fun to watch him run around and play for a few minutes. 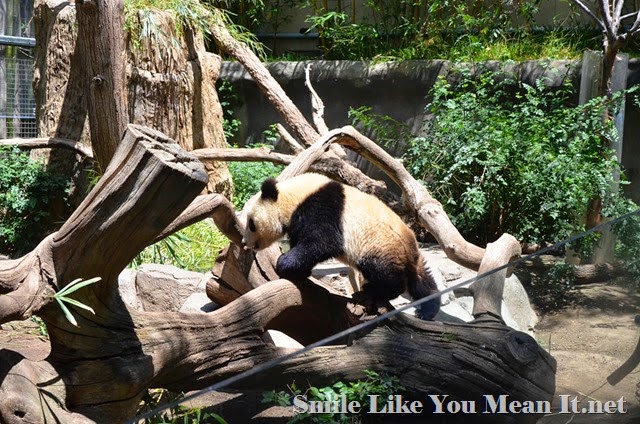 Found some big cats—the Cougar was a must-see. 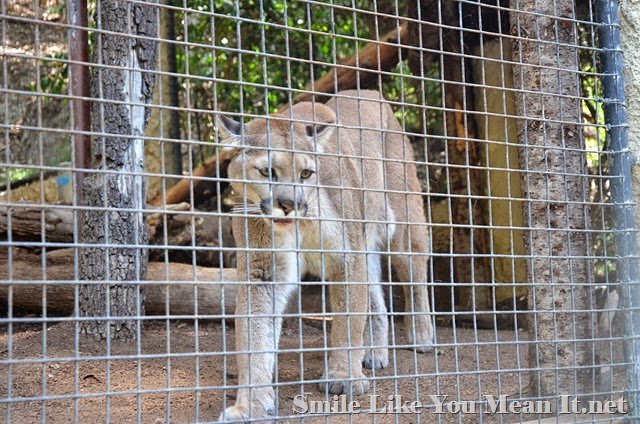 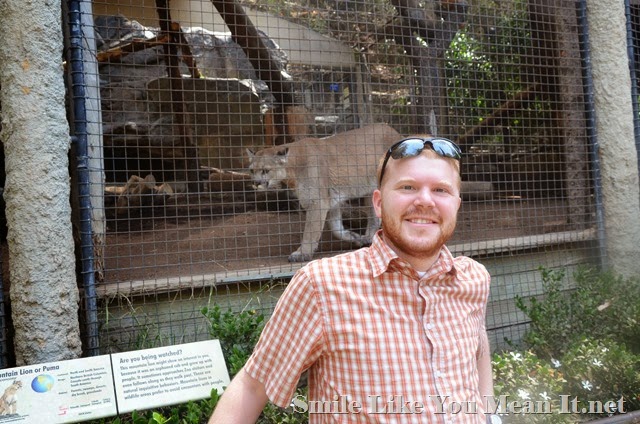 After making it back up this particular hill with the big cats, we had to call it quits because Sam threw The Longest, Loudest Two-Year Old Tantrum in history.  He completely lost it and we just had to pull aside and let him just get it all out because we couldn’t do anything to calm him down!  Definitely time for a nap, so we headed back to the car (he promptly fell asleep).  Luckily, we got him to go down for a nap extension once we were in the actual hotel room and he slept another 2 hours.  We headed back to the zoo!

We checked out the very extensive aviary on our way to the gorillas and big bears.  All the bears were hiding and sleeping so that was lame, but the gorillas were awesome and kept moving around. 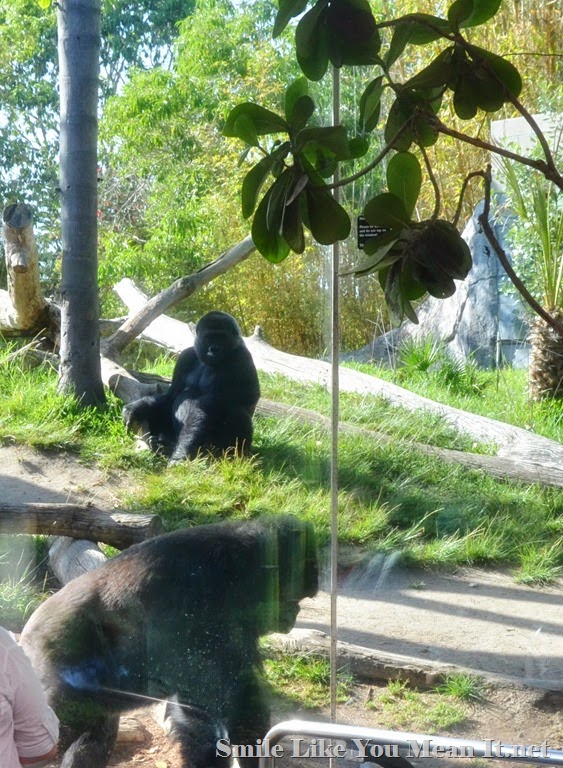 {Sam wasn’t too happy about being back at the zoo and demanded to be held.  The entire time.  At least he let Scott hold him a lot of that time!} 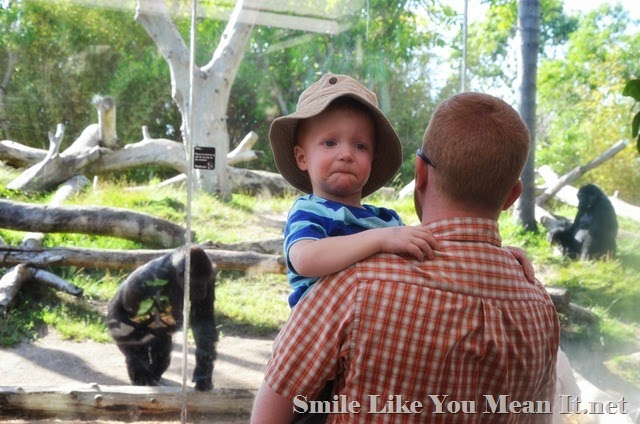 These guys were cool—you can see in the back that they stand up on their hind legs and get really tall and straight! 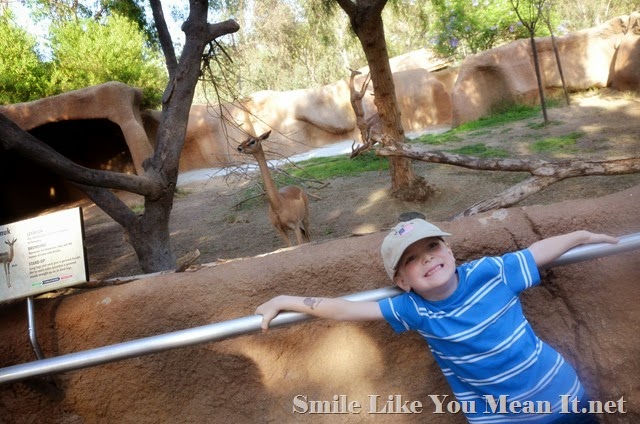 Luke was our little angel on this trip!  He found ways to entertain himself despite Sam being a beast.  He kept putting his hat on all the statues around the park. 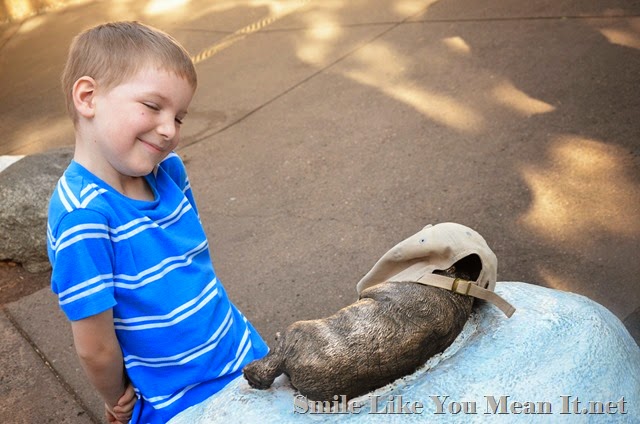 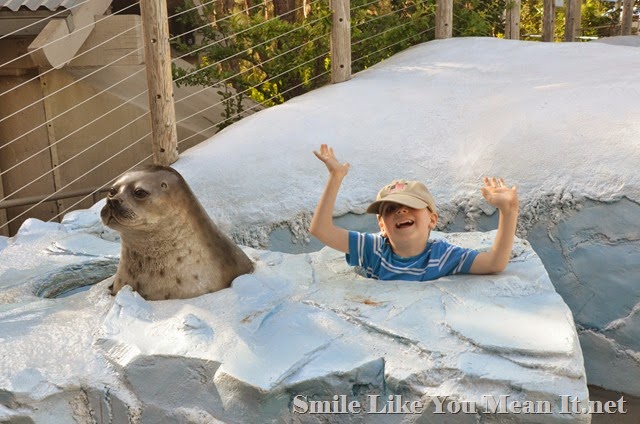 We saw the polar bears and a few other arctic animals before the park closed for the day.  We headed to the store to get treats for Luke (because he totally deserved it) and then back to the hotel to get the kids to bed early.

The next day we packed up our car and headed for the beach before the long drive home.  Sam was scared of the waves at first, but eventually was having fun being “chased” by them with Daddy. 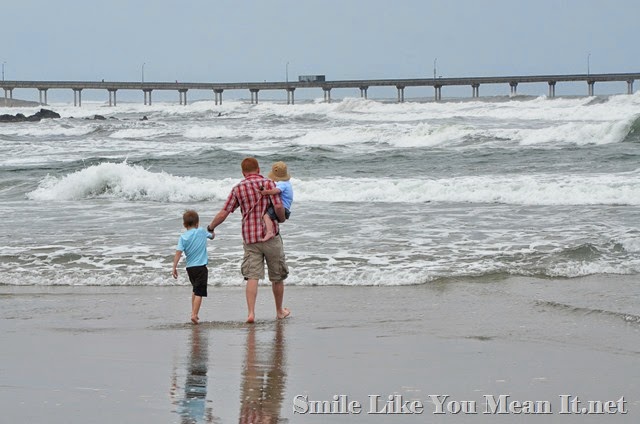 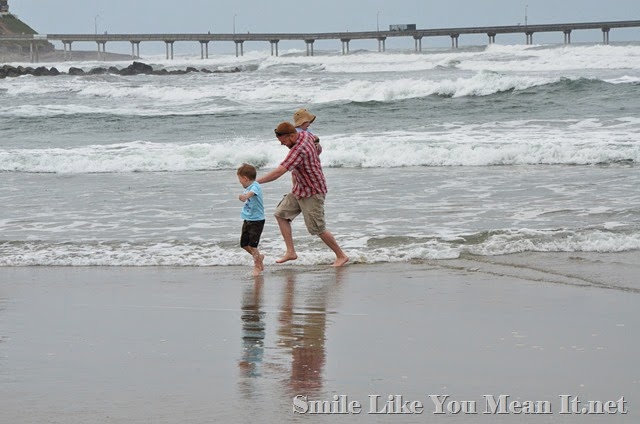 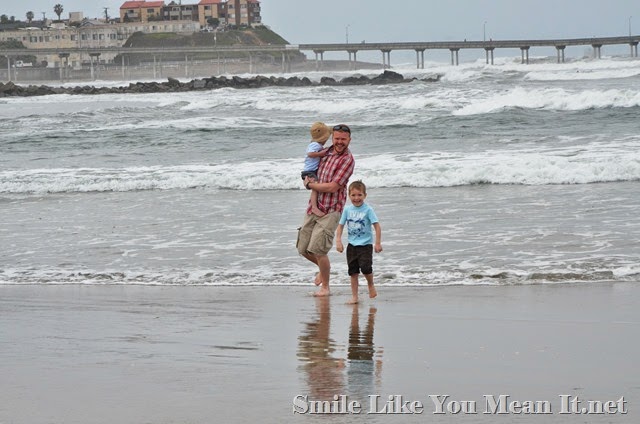 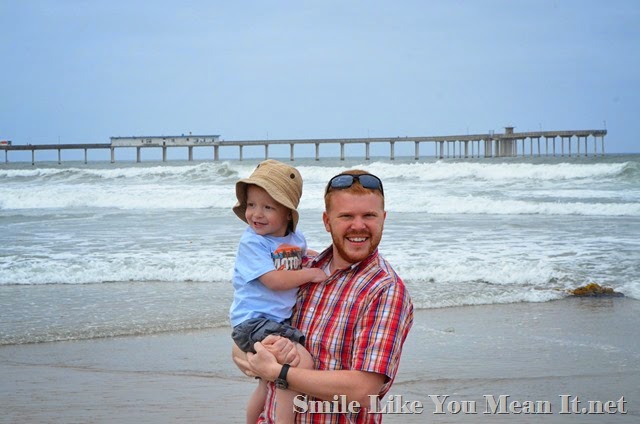 Not happy (surprise, surprise) to be at the beach. 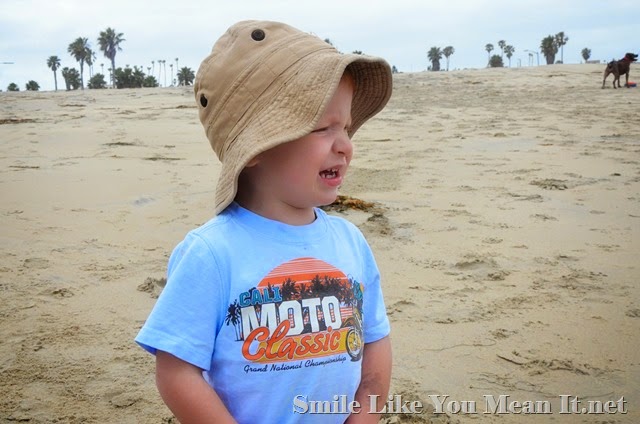 Daddy eventually got him to walk on the beach and run by himself in the water…then he really started having fun. 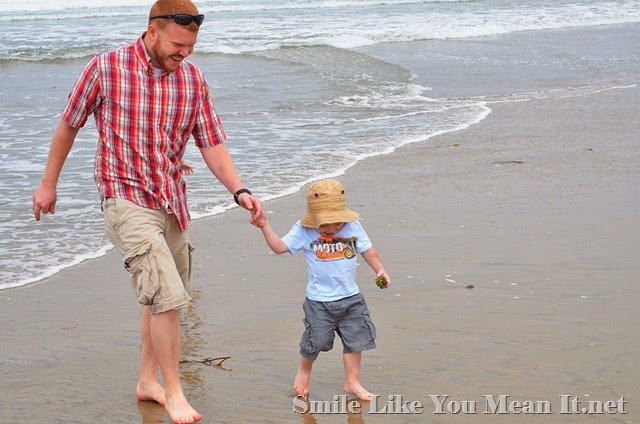 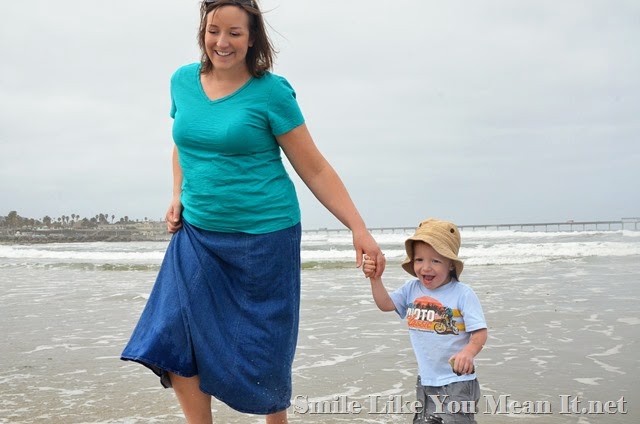 …Until he tripped and fell into the cold cold water!! 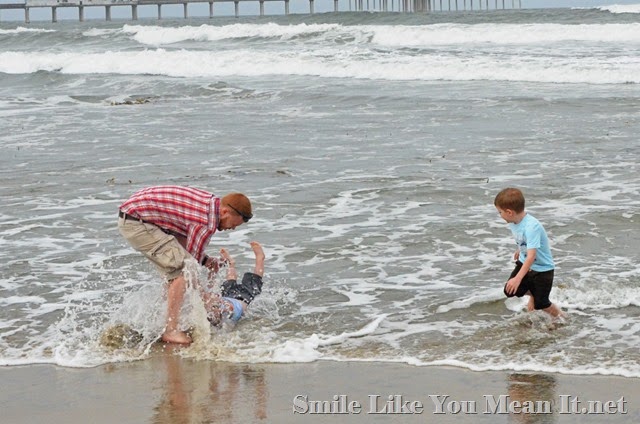 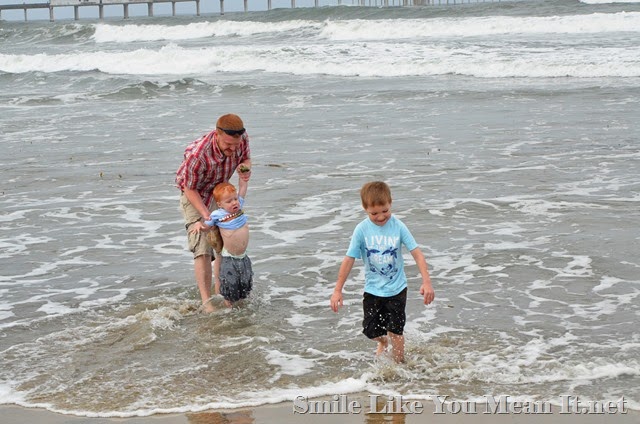 Then Luke tripped, too and we had two very wet boys!  (At Least Luke was still smiling!) 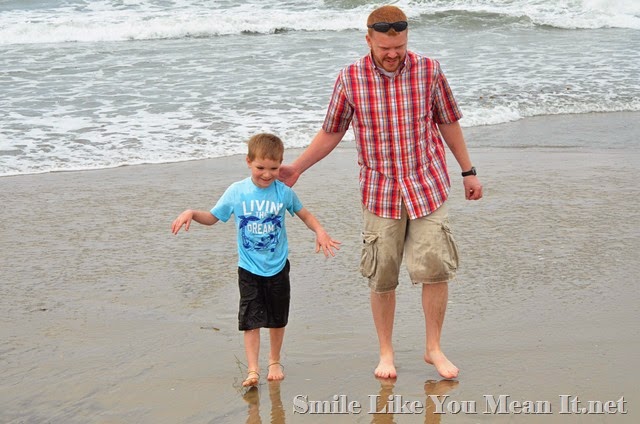 I had clothes within reach in the car so we just got everybody changed and then headed home the rest of the day!

I wish I could say the ride home was good—but it was kind of awful.  We had to make twice as many stops and Sir Grumps wouldn’t eat anything but kept complaining about being hungry.  {insert eye roll here}  We were ALL very happy to be home once we got there!

Overall—we had a good time for about 50% of the time.  Scott and Luke more than me only because I can’t be happy if Sam isn’t happy and that was pretty tough.  Oh well!  Try again when they are older, right?!