Two weeks ago we took a long awaited trip to California!  We’ve been talking about going since February and March, but only a week before we went finally decided just to go!  Luke only missed the last day of his preschool and we got back just in time for his graduation.

We spent all day driving on Wednesday (5-7-14) and the car ride there wasn’t too bad until the very end.  It was late, and Sam doesn’t sleep well in the car. Earlier in the day when he had finally given in to taking a nap, he was only asleep 20 minutes when road construction forced Scott to drive over the rumble strip twice which woke him up.  Then around 10pm, with about an hour+ left of driving, Sam fell asleep for bed, but still had trouble sleeping more than 20 minutes.  He clearly wanted to be in his bed and not in the car.  Poor Scott drove the ENTIRE way there and we were all pretty beat by the time we got to our hotel near Anaheim.

Our first day was spent at Disneyland!!  Scott’s sister, Darcy, works for Disney as an accountant and can sign 3 people in for free—since Sam is free by age, that is our whole family!!  So she met us at the entrance and we started out at California Adventure.

Unfortunately, though, it was 102 degrees this day and we were miserable and melting within just one hour of being there.  Sam especially was not too thrilled even though we spent the morning in Cars land (which should have been a dream come true for him!) He must take after his momma and hate the heat and sun.  I was about ready to pass out by the time we called it quits and made it back to the car just under 2 hours after getting in. 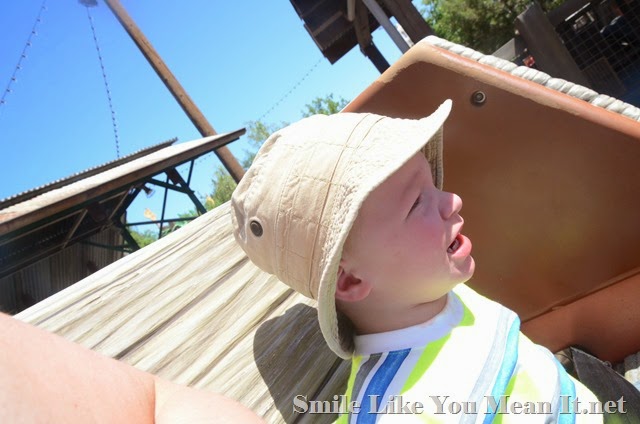 We didn’t end up finding Mater or Lightening McQueen, but we did get a picture with Big Red. 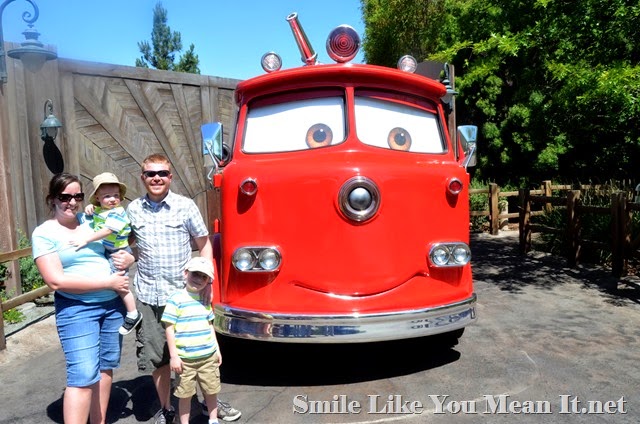 We spent a little bit of time in Bug’s Land before heading back to the hotel for the afternoon. 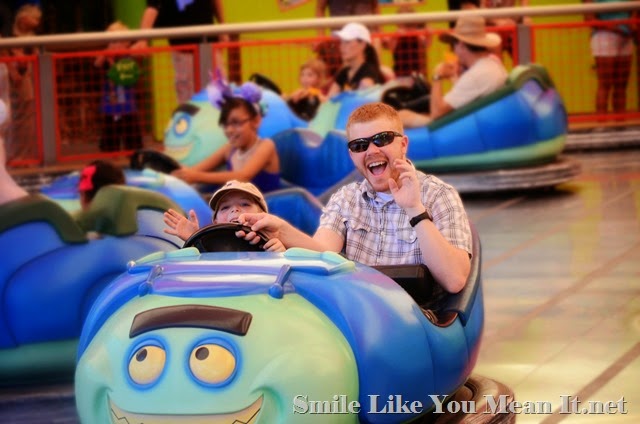 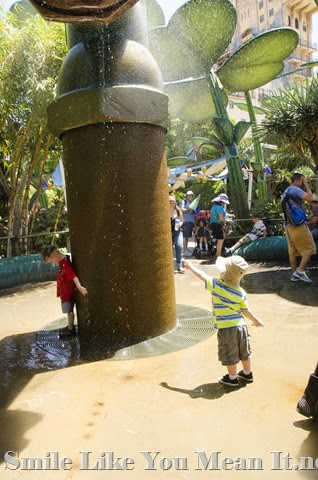 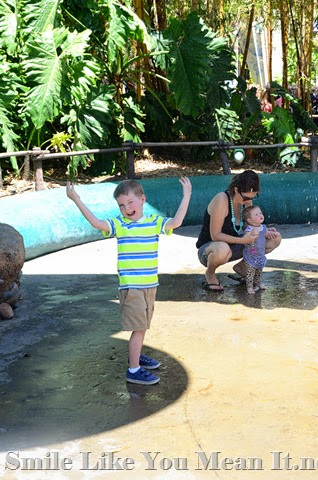 We went back to the hotel for a MUCH needed nap for Sam (and Mommy) and then made it back to the park just in time for the Pixar Parade to start just ten minutes later!  This parade was perfect for Sam because he knows and has seen mostly Pixar movies (Toys, Cars, Nemo, Incredibles, Monsters Inc…) 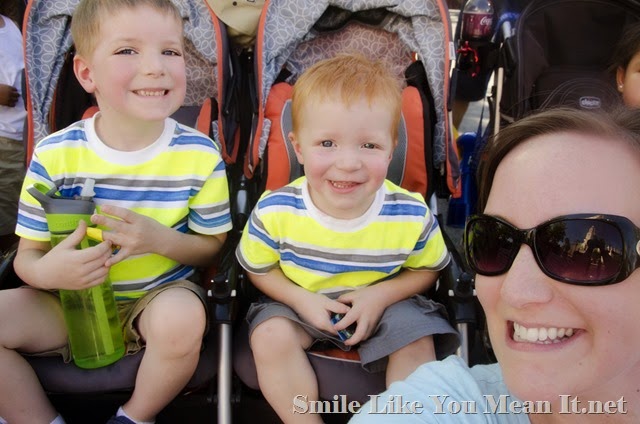 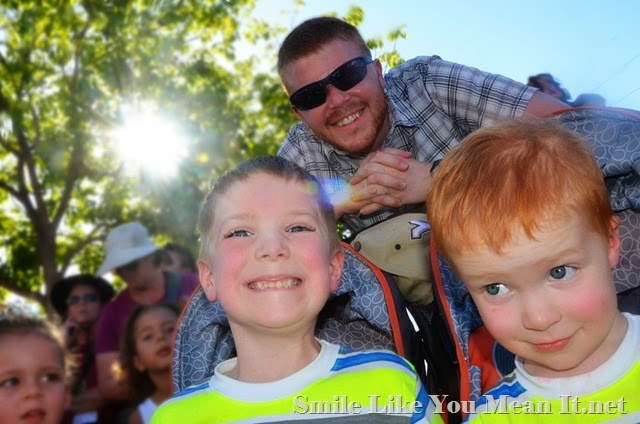 He actually STOOD UP when he saw Lightening McQueen!! He was so happy! 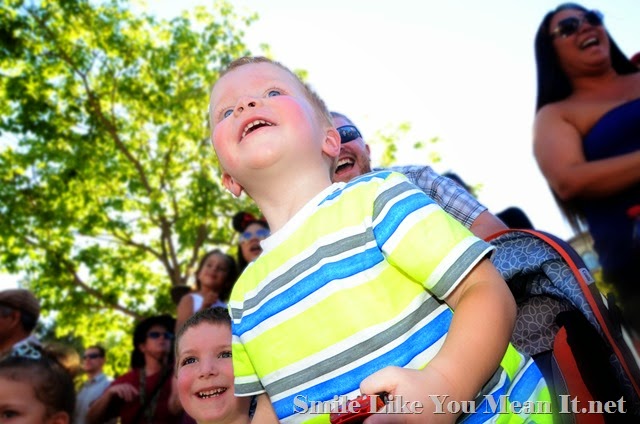 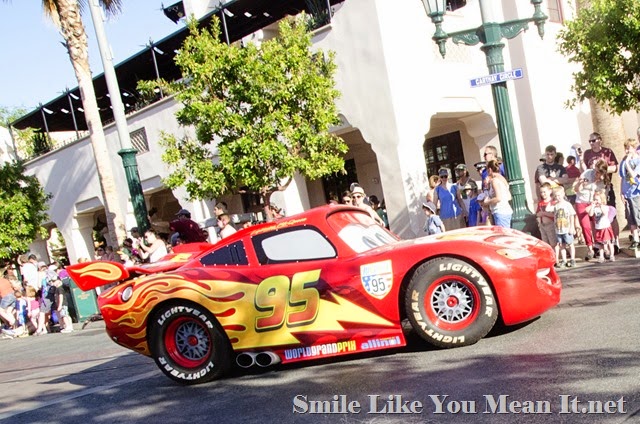 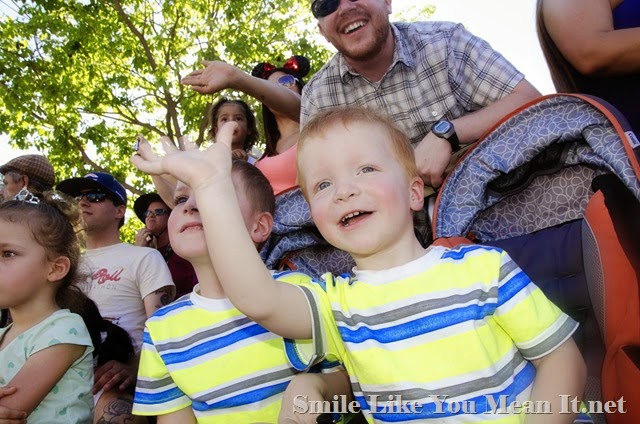 The rest of the day could not have gone better!  It was MUCH cooler than it had been earlier in the day and there were hardly any lines at any of the rides we went to!

We rode Monster’s Inc, went to the Talk to Crush show, the little Mermaid ride and then headed back to Bug’s Land to ride a bunch of those rides over and over. 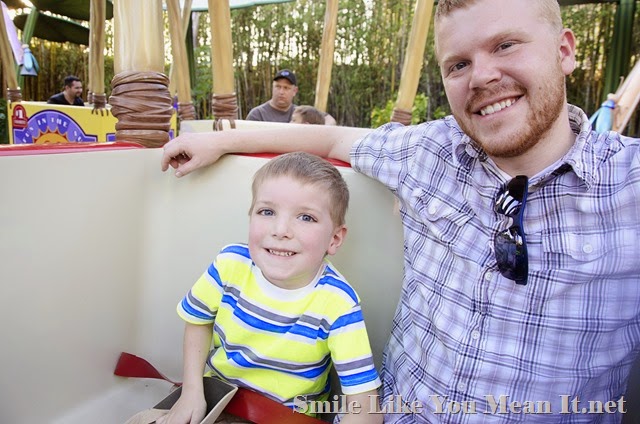 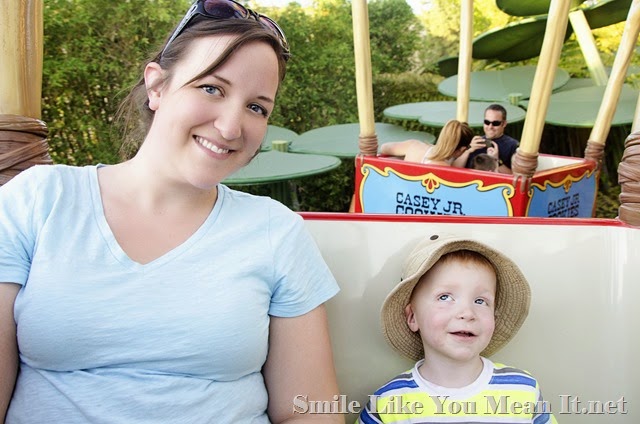 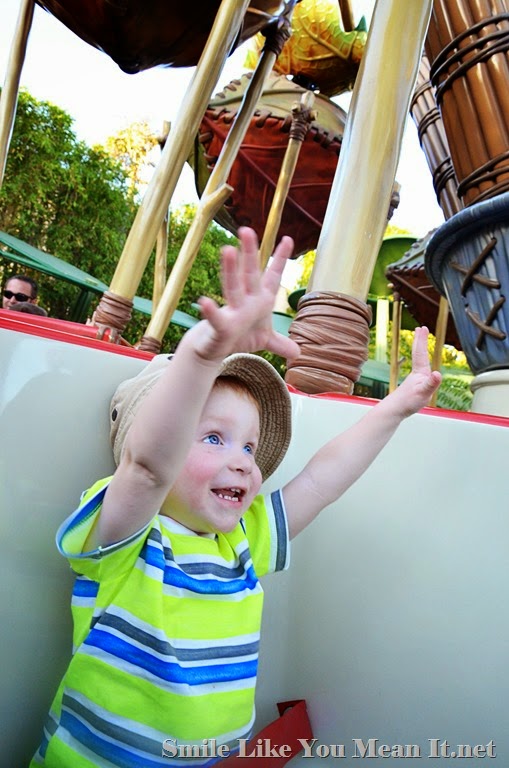 We attempted to ride some rides at the Disneyland Park, too, but it was ridiculously crowded.  So we just rode the carosel and then went over to the Buzz Lightyear ride.  The boys enjoyed trying to pull the sword from the stone… 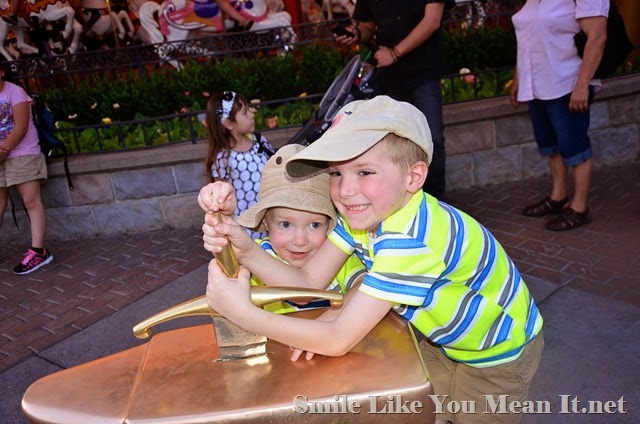 On Friday, we went to a little known park called Adventure City.   I opted to leave my camera behind. Basically, all the rides are for kids under the age of like 10.  The park is small and pretty cheap.  There were several things that Sam loved to do—riding a train around the park (3-4 times), a hot air balloon swinging ride, a ride where he got to drive cars and trucks (we rode it twice) and drinking mom’s grape slushy.  Luke went on a lot more rides than we could get Sam to go on.  There was only one small roller coaster that Sam couldn’t ride and neither Sam or Luke wanted to anyway.  There was this awesome misting room—a big white tent that had tons of nozzles of mist.  When you walked all the way in you completely disappeared!  It was really fun and refreshing on a warm day.  It freaked Sam out that Luke kept disappearing, so even though he likes water and sprinklers he was scared to go near it. It was not crowded at all so there was never a wait.  If you ever go—go on a weekday during the school year.  Not during the Summer when kids are out of school or on Saturdays. Because if you had to wait around to ride stuff, it probably wouldn’t be as much fun.

Friday Night we spent at Darcy and her husband, Kenny’s apartment to play games and catch up since we don’t get to see them much.  It was a great ending to a good day.

Saturday we went back to Disneyland again.  Darcy and her husband joined us that morning in the park.  Unfortunately it was REALLY REALLY REALLY crowded.  We ended up waiting for the Buzz Lightyear ride for-ev-er.  But it was worth it for the moment Sam saw Buzz.  He loved this ride because he could shoot a gun and control the car—making it spin all over and making Daddy work really hard to try and get a good score ;) 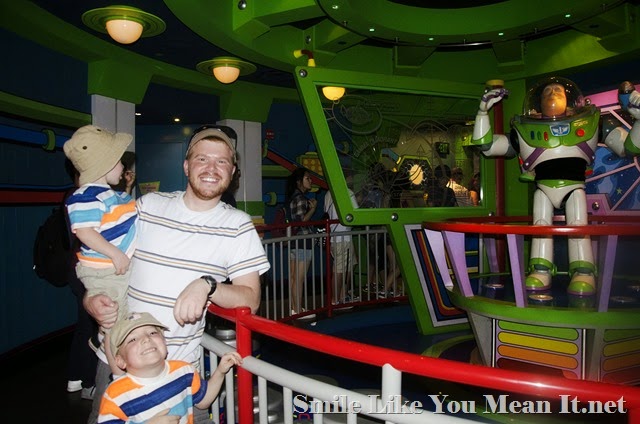 Sam had actually had a pretty rough night (throwing up and keeping mom and dad awake with that fun-ness from 2:30-6am) So he wasn’t super thrilled to be back at an amusement park even though he was seemingly feeling much better.  We bought him a light up bubble gun that made him extremely happy until naptime! 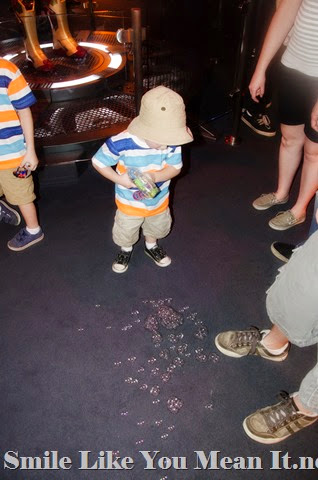 We went over to check out the Iron Man suits which Luke thought was pretty awesome! 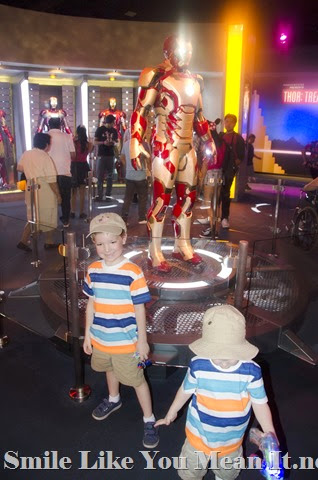 That’s where my pictures end for the day, but the story doesn’t end there at all!

We said goodbye to Darcy and Kenny since they had a party to attend that afternoon, and then we drove to their apartment to give Sam a nap since we’d check out of our hotel room. (Poor planning on our part to have to do that.)  He woke up kind of tired and fussy, but he’d woken up that way every day of our vacation so we didn’t think much of it.  We went back to Disneyland to see if we could have another great evening there.  We got there in time for the Pixar Parade again (Sam wasn’t nearly as excited the second time)  We rode a few rides and then headed over to the Disneyland side to ride Buzz Lightyear again.  Sam just wanted to be held the whole time (by mommy, of course) so I did my best to lug him around in line.  We’d finally gotten inside and were standing right in front of Buzz again (just minutes away from boarding the ride) when Sam threw up all over himself, my shoulder and the floor.  (Slap forehead)  I wanted to die.  Scott went to try to find someone, but no one came, so after five minutes of standing there feeling stupid I just took Sam and backtracked out of line and out of the building to our stroller. Scott took Luke on the ride because we felt bad for him to have to miss out on everything when it was Sam that was being so difficult on the trip and he was being so good and patient.  Needless to say we were done after that.  So we fought the crowds back out of the park to the bus and to the car.  We changed Sam into PJs and I changed my smelly shirt.  We turned a movie on in the car and headed for our next hotel in San Diego.