Here I am one year ago—ready to burst.  Feeling like I couldn’t possibly get any bigger and wishing every day to just be able to be comfortable again! This was the ONLY shirt long enough to cover my enormous baby belly. 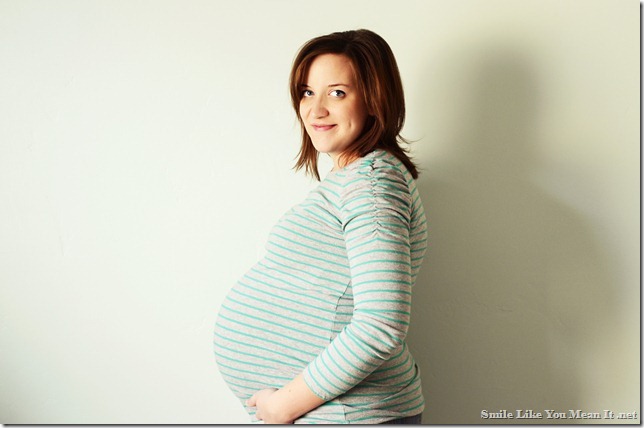 We soon found out why I was so huge…Baby Sam came out weighing 10 lbs 15.6oz!!! That’s pretty much ELEVEN pounds.  I still can’t believe it. 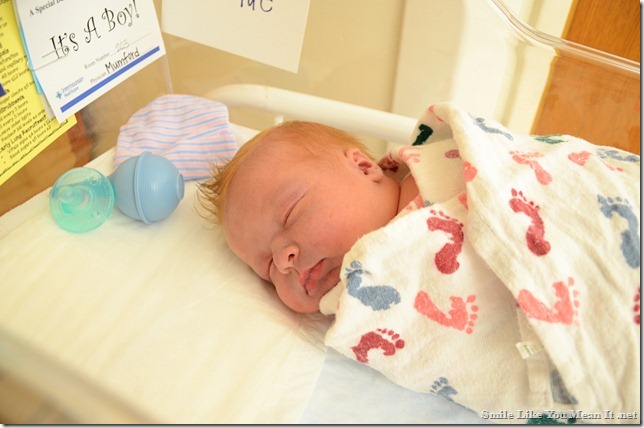 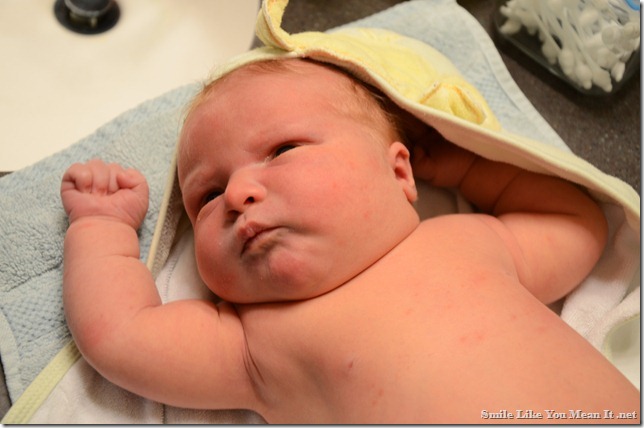 And now here we are entire year later!  I can’t believe how much Sam has changed from the fat, squishy baby we brought home!

Look at him now! 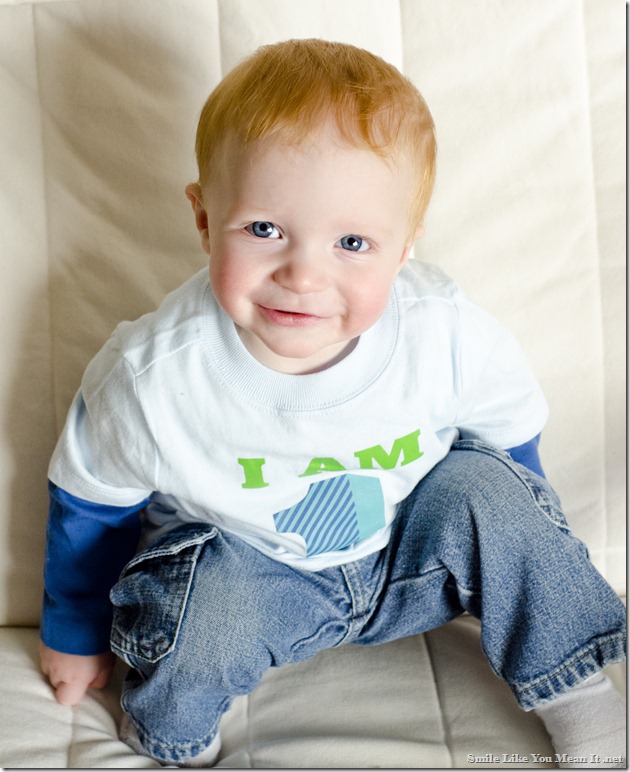 I can’t go anywhere without at least one person saying something about him!! The other day in the returns line at the store there was a little redheaded girl a few months older than him who was obsessed with him!!  It’s usually the older ladies who make comments to me, though.

Sam is such a happy, busy baby! 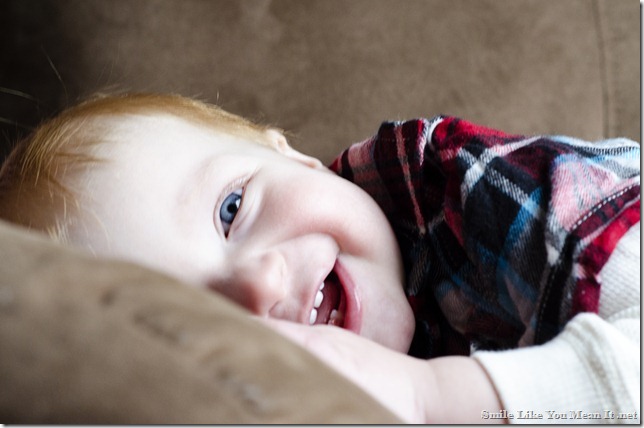 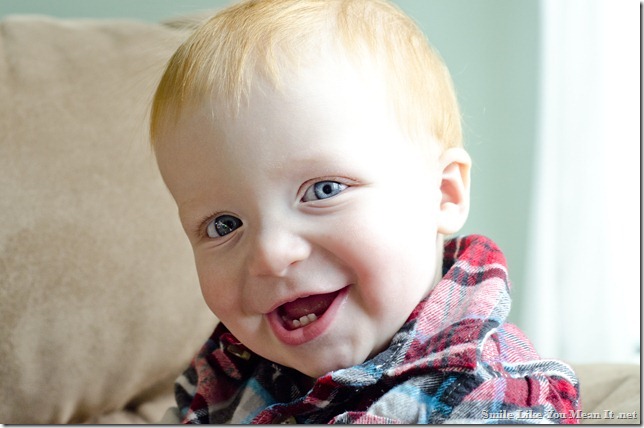 Although somewhat still kind of wobbly, he is a really good walker.  He falls a lot still, but he has almost completely forgotten about crawling. 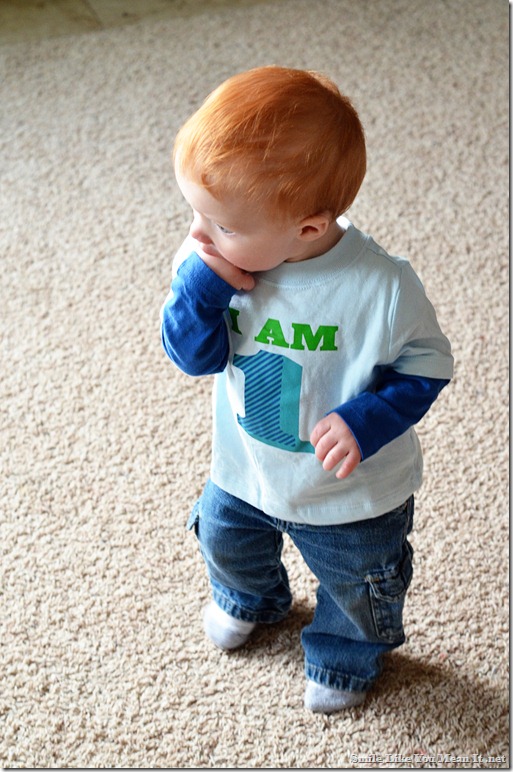 Loves to sit in mommy’s lap on the floor.  Definitely prefers mommy over daddy.

Loves to cuddle, be tickled and play!

Loves to empty out laundry baskets and drawers and especially the dishwasher.  Oh he gets SO mad when you close the dishwasher without letting him play in it!! 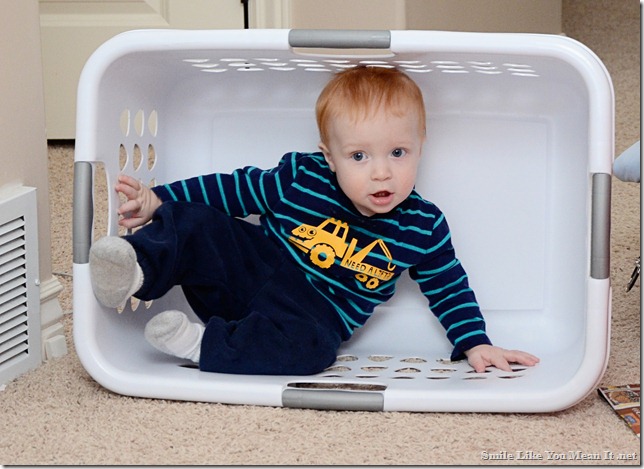 Loves pens and spoons—happy when he’s holding one at all times.  He runs away if he knows he’s holding something he’s not supposed to…like scissors.  He is super naughty and he knows it.

Tries to feed himself with the spoon—definitely still learning on that one.  Does best when I put the food on his spoon, but I don’t dare try to pull the spoon out of his hand unless I want to fling food all over the room. 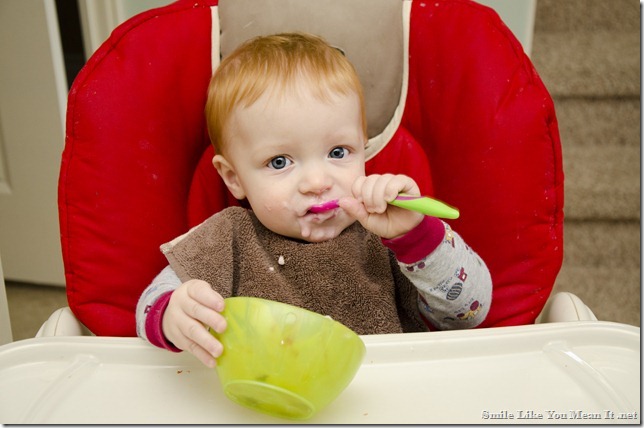 Has traded in saying “Bye” all the time to saying “Hi'” all the time.  He says “hiiiii” when I come and get him from naps, when daddy comes home from work, and every time he sees the kitty walking by!  So.Darn.Cute.

Has monster tantrums where he gets really mad and either throws whatever he is holding, or if he isn’t holding something he just throws his head and body all the way back!  He has banged his head more than once.   I thought I had another year before I had to deal with tantrums! At least they are fairly quick ones right now. 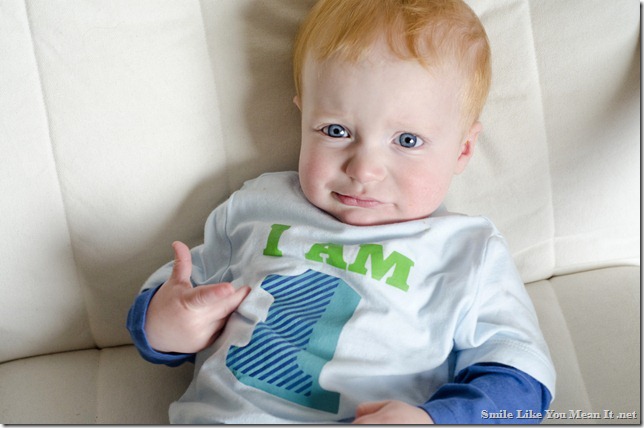 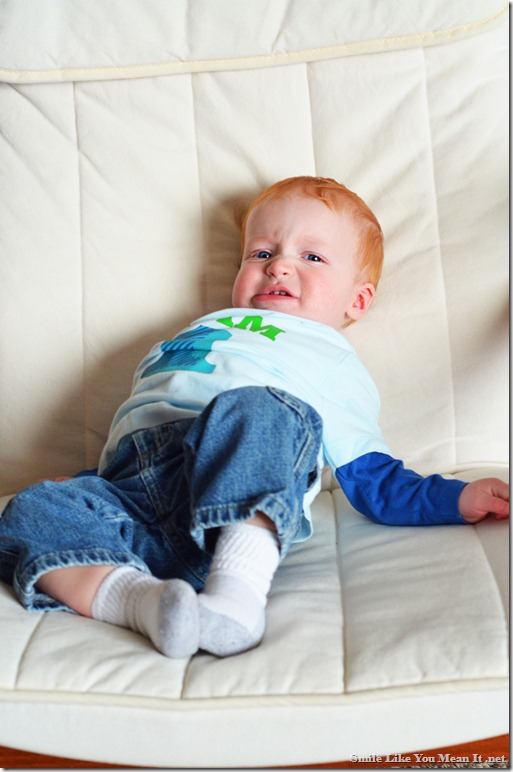 or I guess this one for that matter! 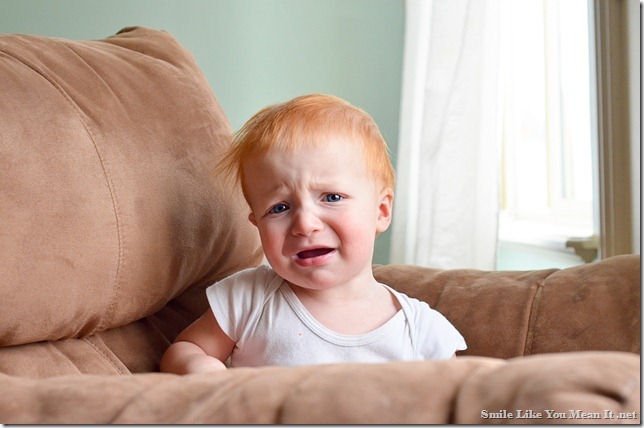 He has started pointing to what he wants, so I have upped my use of baby signs with him.  He sign’s for “drink” and I’m teaching him “more”, “all done” and “hungry”  He already learned how to do “all done” but he refuses to sign it for me. 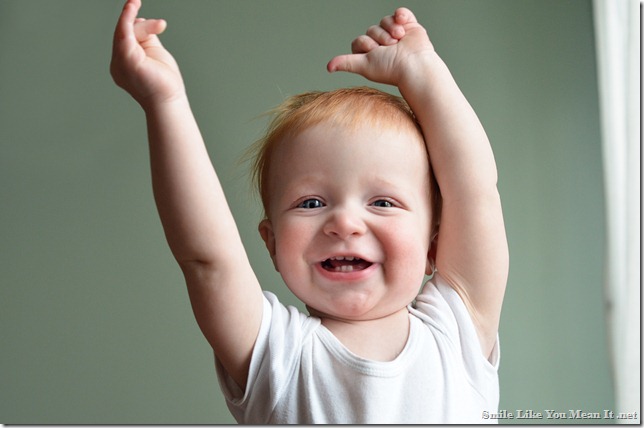 He loves his bottle.  He drinks a big bottle first thing when he wakes up, and then before every nap.  It’s going to suck to break that habit.  I have no idea how to wean a baby off a bedtime bottle!! Especially since reading books does not calm him down like a bottle does! 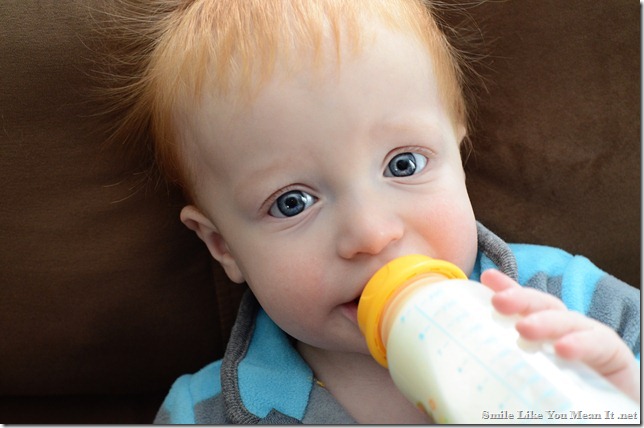 He seriously makes the best expressions.  Probably why he is so darn cute! 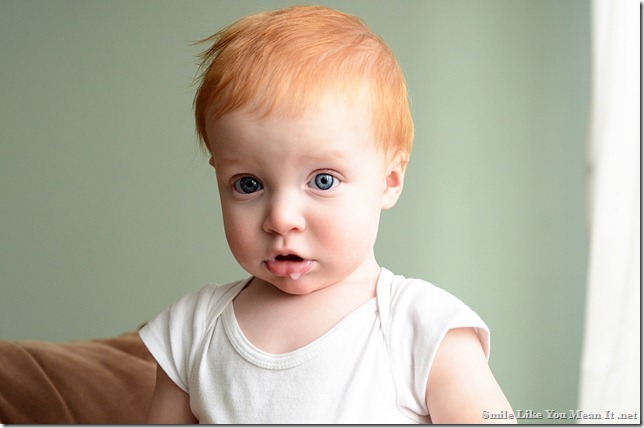 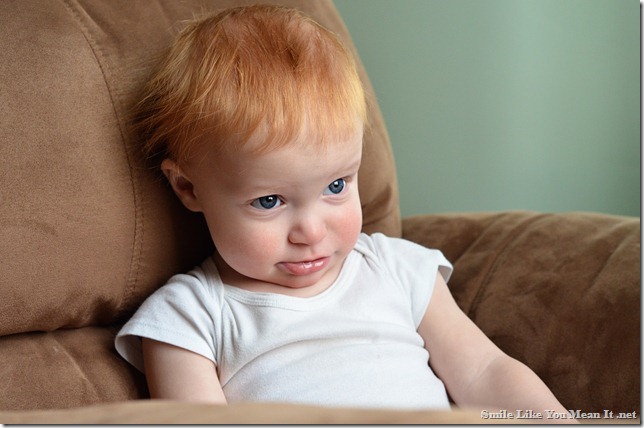 He loves to clap! 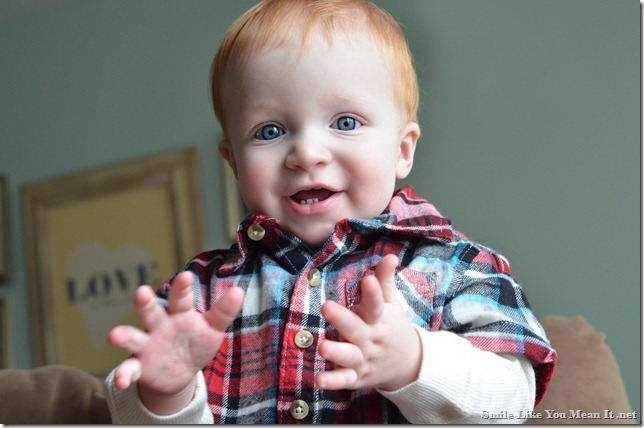 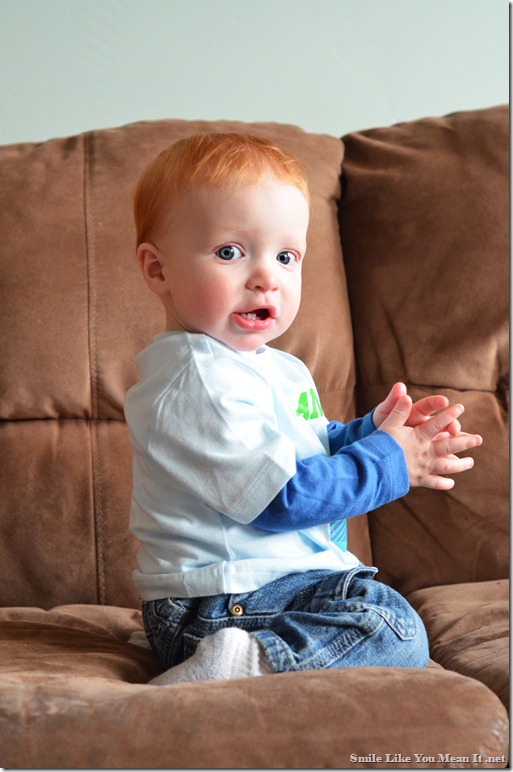 And the last picture for this entry… 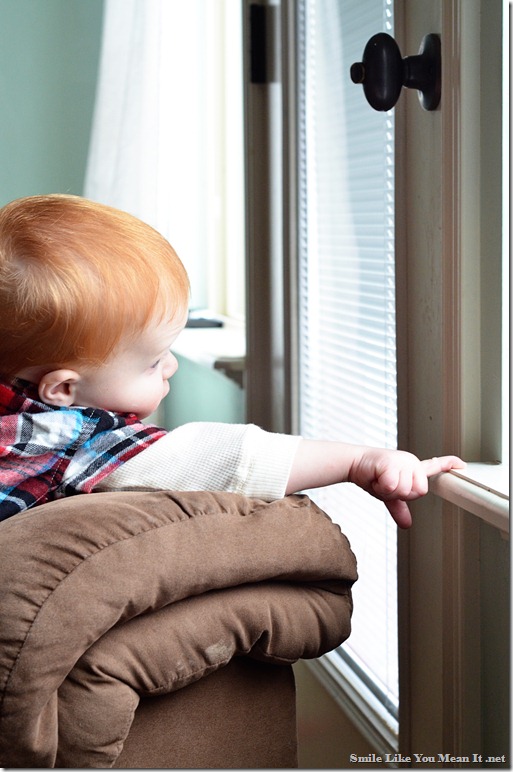 This picture speaks volumes to me of Sam’s personality!  That little finger gets him into so much trouble sometimes!

I have so many more cute pictures from Sam’s photo-shoot that I will share later.  Right now I have to get working on his Birthday Party!  This week is all about Sam!