It’s only 2 weeks until this little guy turns into a one-year-old!  I tell him to stop growing…but he won’t listen. 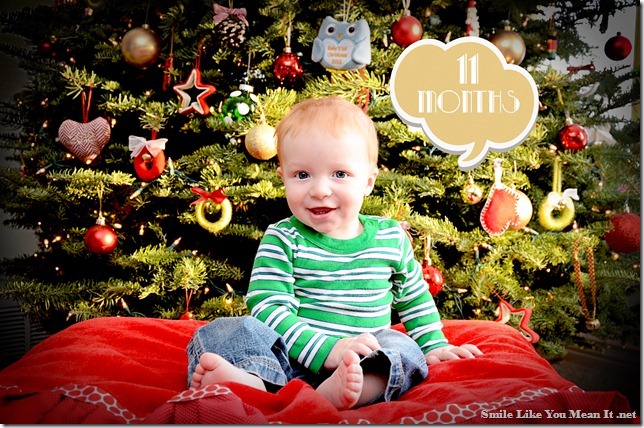 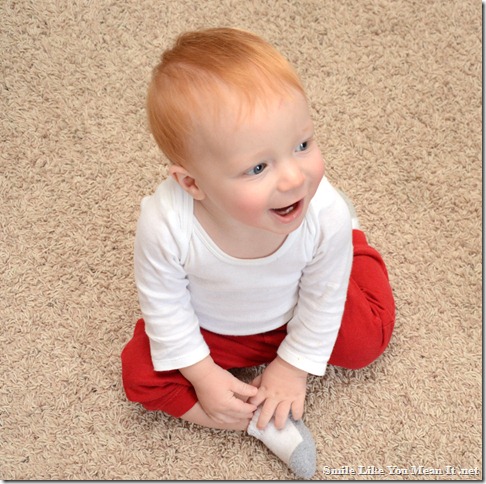 Sam was in serious need of a haircut. 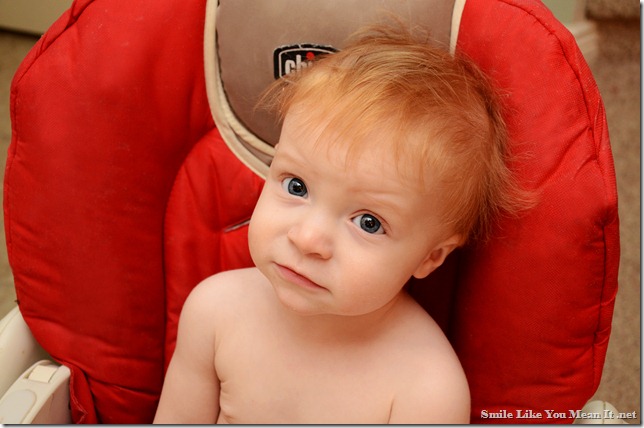 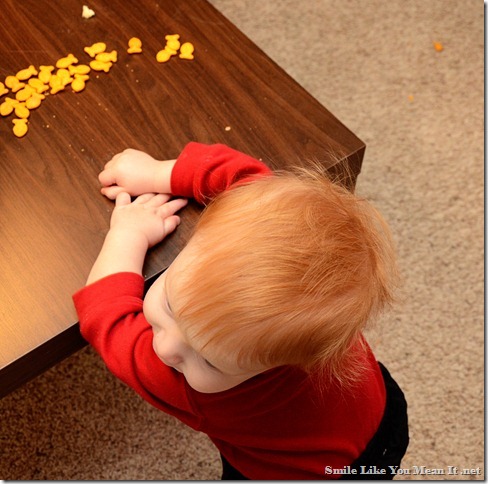 He did NOT like it.  Not one bit!  It took Scott pinning him down and a lot of screaming to get the job done.  I don’t have a good after picture, but it looks SO much better! You can see in the pictures below that it does look better!

LOVES cars and trucks of any kind.  Pushes them around the room on the floors and the walls.  He loves to watch them zoom off and then chase them.  He loves pretty much anything with wheels—he loves Luke’s bike wheels and pushing his walker around the room.  He had a blast pushing this giant remote control truck in Georgia: Before we left, I mentioned that Sam was starting to walk…

Well during our vacation he just got better and better and now he’s walking all over the place!  We got him a pair of shoes, that took some getting used to, but he does good in those too.  It was super funny because he would NOT stand up when we first put shoes on him.  He was “stuck” in a sitting position when we tried to lift him into a stand up position.  His shoes are pretty lightweight now, so he doesn’t mind them as much.  He’s also figured out how to stand up in the middle of the room without holding onto anything to get up.  So that pretty much nails him down as a serious walker. 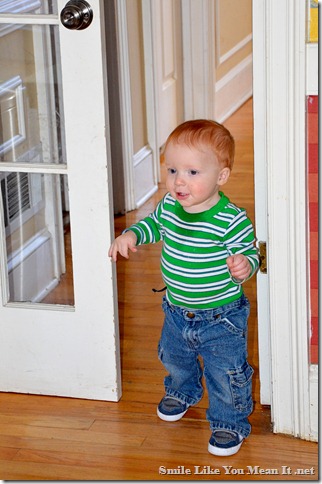 Sam absolutely LOVES to hide!  He thinks it’s the funniest thing in the world to run or crawl away when mommy wants him to come to her.  Espeically loves to escape when he’s naked at bathtime.  He will crawl super fast down the hall giving me a sly little glance, so knowing exactly what he is doing!  He will come back only as if to say “come and catch me!” 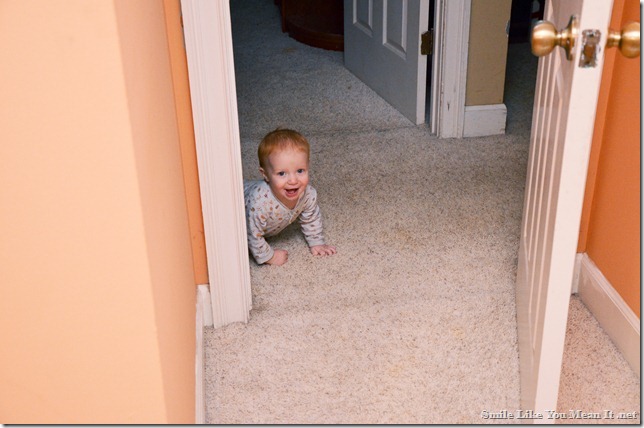 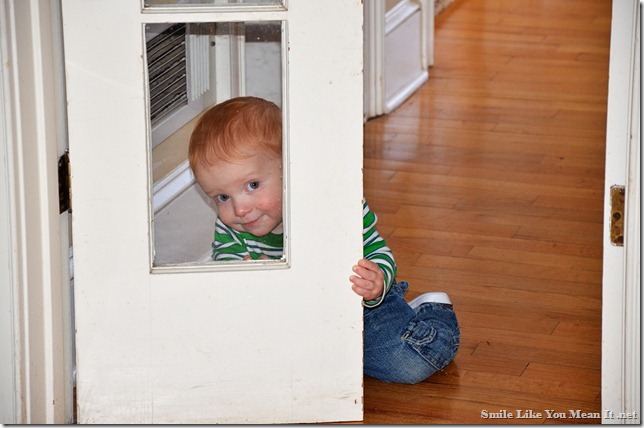 Sam is a great sleeper for the most part. He sleeps about 11-12 hours at night, naps for a solid two hours in the morning and anywhere from 1 1/2 hours to 2+ hours in the afternoon! He had to get used to a pack-n-play on our trip, but for the most part he did great! I always put a box-fan in his room to block out all the excess noise and I really think this helps him sleep longer. Most people think I’m pretty OCD because I demand that he’s in his own room, with a fan, and keep it pretty dark in there. But hey, it works! 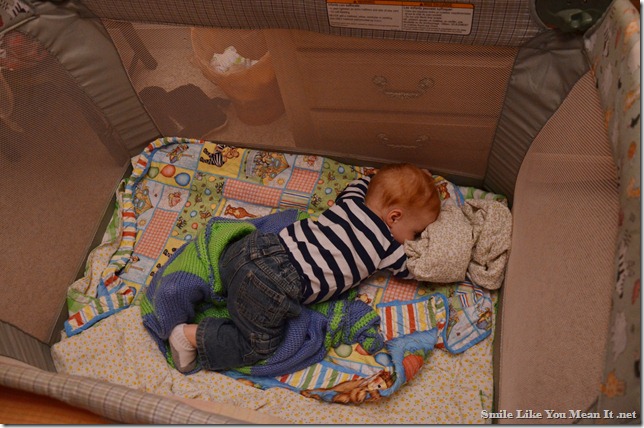 When Sam is mad he has a little “dinosaur” yell—kind of like a yell without fully letting it out?  It’s hard explain, but if you heard it you would say, Yup definitely like a dinosaur.  He also hits and sometimes tries to bite when he gets mad…not good.  He also hits when he’s excited, so it’s kind of a hard thing to break.

He’s a talker, too—likes to gibber-jabber entire conversations to himself when he’s playing.

He’s officially said his first word besides “mama” and it’s “BYE!”  It. is. adorable.  All I have to do to get him to say it is to walk to the garage door…he will think he or someone is leaving and he will start saying “Byeee!” and “Bye-Byeeee!”  He waves bye, too, but he loves to say it.

This boy is super curious.  It’s a completely new experience for me.  He will open cupboards, drawers, boxes and empty everything out and put it back in…and repeat.  He will keep himself busy exploring what things do.

He’s starting to express his desire to self-feed with a spoon.  He wants to hold the spoon and feed himself and if you guide it too much he will use his super-human baby strength and pull the spoon away from you thus causing a huge mess.  Much to my dismay, he does not want to each much baby food anymore.  A lot of my go-to foods he won’t eat anymore either.  Not a huge veggie eater.  Does love chunks of banana, cheese, yogurt, bread, apples, some foods that we eat for dinner.  He used to love peas and mixed veggies {not puree} but he’s getting kind of picky.  I guess I’ll just have to get more creative and make more things like veggie muffins! He still loves his bottle, but he’s learned how to use a sippy cup and loves to drink juice, too!  I save juice for fussier times and when we are out and about.

Sam loves balls and putting balls down his ramp toys.  He loves things that are soft and furry.  He immediately goes into thumb-sucking mode when he comes in contact with a soft stuffed animal or blanket.  Our family is getting a cat soon {we are currently looking for one to adopt} and he gets SUPER excited when we are around them.  He even gets excited just looking at the pictures of cats on the computer!

Sam’s had our families' first ER visit.  Over our vacation he got a little cold—mostly a running nose.  One night he got woken up and I could tell that he was breathing really heavy and labored so I ran in and got him to see for myself if he was ok.  He seemed ok in all aspects except his breathing was slow and deliberate and appeared somewhat of a task for him.  He let out some coughs and my mother in law said it sounded like Croup.  We got him humidifier and I sat with him in a steamy room for a while and his breathing got better.  He went back to bed.  It was only an hour later he was awake again and sounded pretty bad again.  This time a steamy room did not help.  Nor did taking him outside in the cold air for a while.  So after an hour of trying different things and nothing helping, I woke up Scott and he had me call a nurse.  She gave us an assessment and recommended he see a doctor.  Since it was about 1:30 am at this point that meant we had to take him to an ER.  They could tell right away that he had croup.  We spent the next 3 hours at the hospital.  He got a steroid shot to open up his airways and I could tell it was working after not too long.  He also had a chest x-ray and a breathing treatment.  It took 45 minutes to get discharged—which was the most annoying part. By the time got home and I got Sam back in bed, it was 5:30 in the morning.  I hadn’t slept at all by that point.  Not a great experience, but I’m glad he was able to get the steroid shot because it would have only gotten worse instead of better.

That’s it for now!

Sam turns ONE in just two weeks! I can hardly believe how fast the last year has gone!