He is growing up WAY too fast!  This is a combo of his 10 months and his 11 months post and I’m only writing all this down so I remember when I go back and finish up his First Year scrapbook! 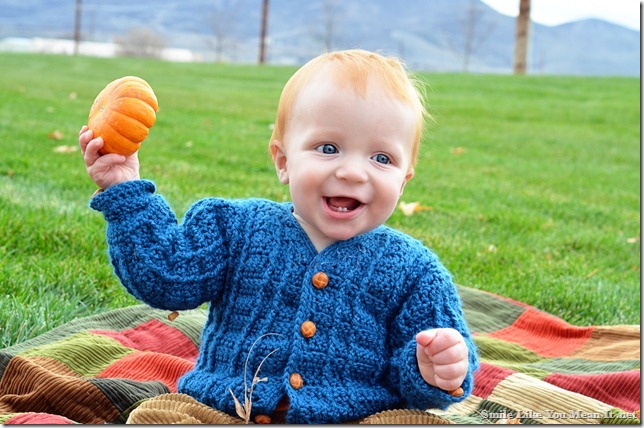 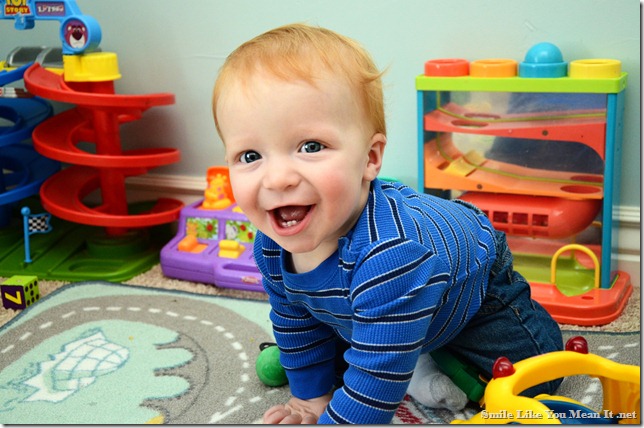 The biggest new is over the last week he has started to walk! {12-9-12} More and more he lets go of the furniture and takes a few steps!  The most steps he’s taken is about 5 or 6 before he gets too excited about what he’s going for and starts crawling. 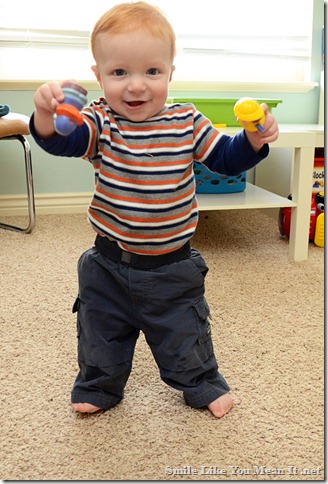 He’s figured out that he needs to turn around feet first to go down off furniture and stairs.  He still needs supervision, but he’s getting better.  He can go all the way UP the stairs all by himself without me worrying too much now. He only slides down about 5 or 6 steps before he wants to quit and have someone take him down the rest of the way.

He’s stopped, for the most part, eating the darn squinkie toys that Luke leaves laying around.  If I do catch him with something in his mouth, I say “Spit it out” and “Give it to mommy” and he does!  It’s amazing!

Last month he learned to shake his head No-No-No.  He does it when he doesn’t like his food or when he’s playing with Luke and something happens he doesn’t like!

He signs “All Done” when he’s done eating.

He’s a screamer! He has a very loud very high pitched scream and he’s not afraid to use it!  Mostly against Luke who tries to keep toys away from him sometimes.

If you’re holding him and he gets excited, he starts hitting you.  Holder beware—there have been injuries!

He’s been sleeping 12-13 hours a night most nights.  During teething times he woke up a few times around 5 or so wanting a bottle, but those days he slept in til 8 which was nice. For the most part he goes to bed between 6:30 and 7 and wakes up around 6:50 and 7:10 in the morning.  He loves his blankie and still snuggles it and sucks his thumb.  When he plays with soft stuffed animals or blankets he goes into sucking-thumb mode which is really cute. 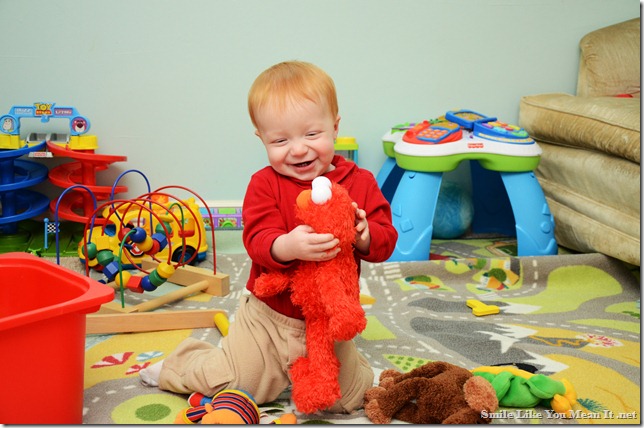 He loves to rattle things and bang toys.  He shakes almost everything he holds just to see if it will make a noise.  He pushes cars around the room and loves putting his ball down the ball ramp toy. 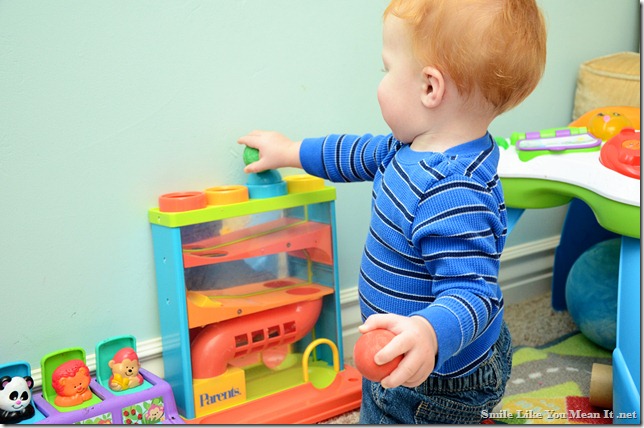 Sam LOVES to play hide and seek! He is SUPER ticklish and lets out huge gut laughs when you really get him! He is starting to mimic—making funny noises with our mouths or pretend nibbling on fingers…he is starting to do that to us and he laughs because he thinks it’s funny.

Hates his car-seat.  Have to give him a cracker just to get him seat-belted.  but then he’s usually ok.  Luke is our cracker-feeder if he’s having a bad car-seat day. 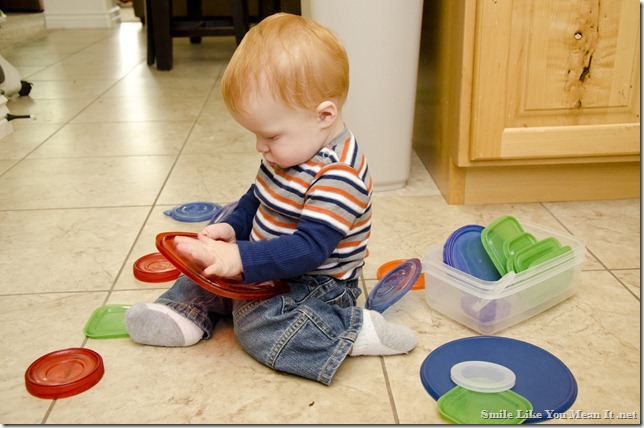 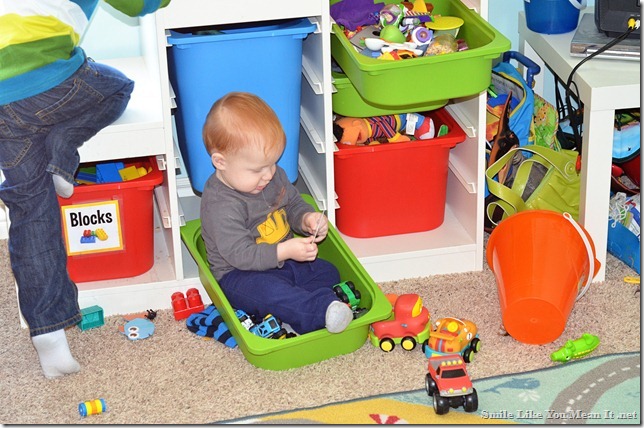 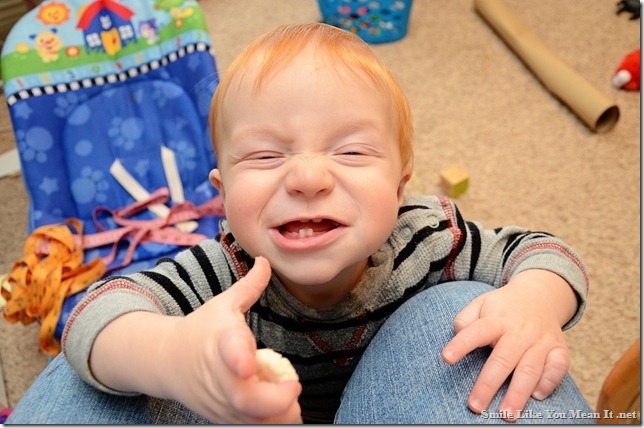 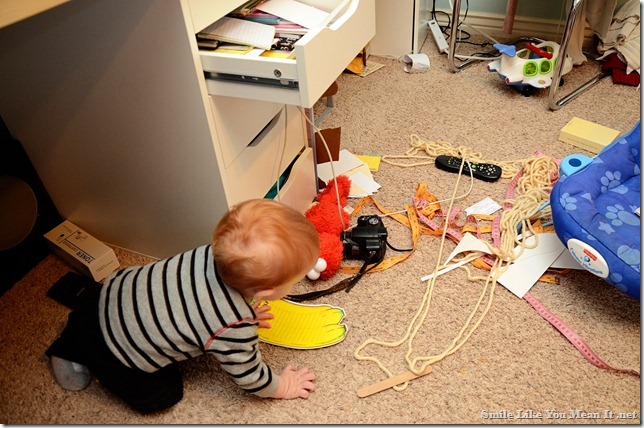 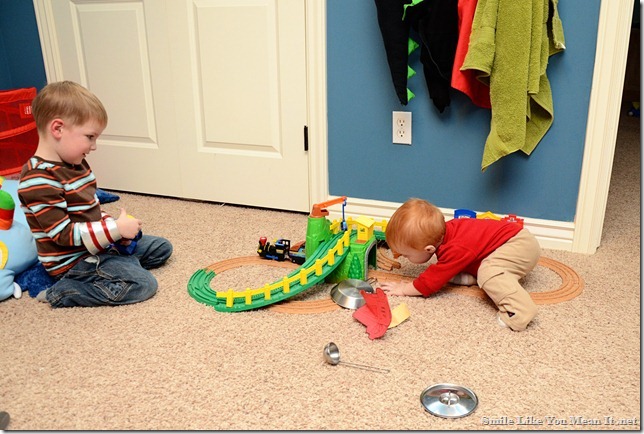 He’s messy, curious, super fun and cute and we love him!