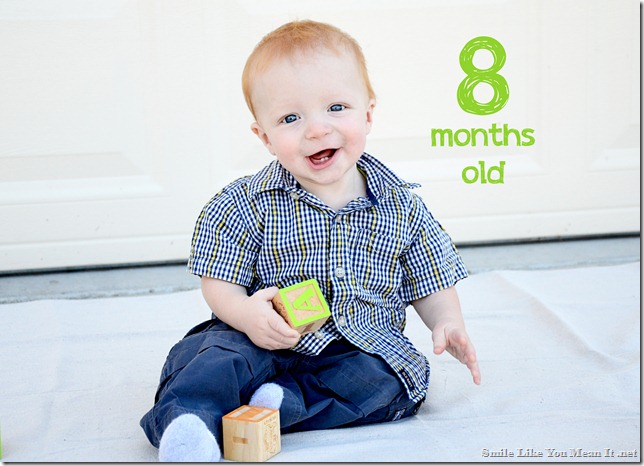 And man he is at a pretty fun age! He has been changing and is so much fun!

Over the last month, Sam finally learned to sit up on his own.  In fact, he is a pro at all sorts of movement and positions now.  He fully crawls on his knees now {ditched the army crawl}, he sits on his bum,  and he sits back on his knees, too.  He can walk along furniture slowly and he can get down from standing without a problem.  He has started climbing up the stairs, too and will go up the entire staircase on his own! He is still pretty wobbly on the stairs though so he needs someone to be there while he climbs...or else he may decide to sit down into thin air and fall. 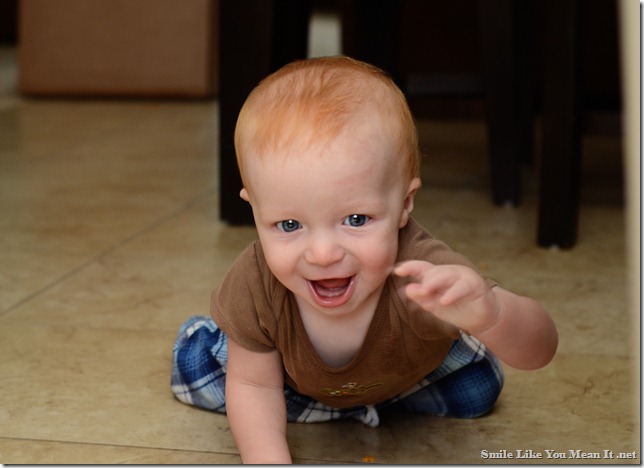 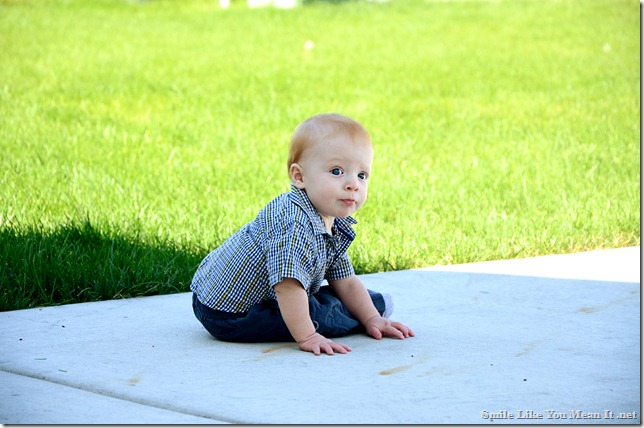 Babbling practice is in full swing.  He went through couple weeks where he would just blow raspberries constantly all day {and drench his shirt doing it}.  He practices saying “mmmmm” and “ma-ma” and “ma-ma-ma”  and even “da-da-da”.  I’m beginning to think that he’s saying “ma-ma-ma” to call for me a lot of the times too because it definitely seems intentional—especially when he wakes up from naps.

More than babbling, though, Sam YELLS.  and Sam yells LOUD and OFTEN!  He yells loudest when he’s playing in the tub {his favorite thing to do}, but he will yell anywhere else, too. 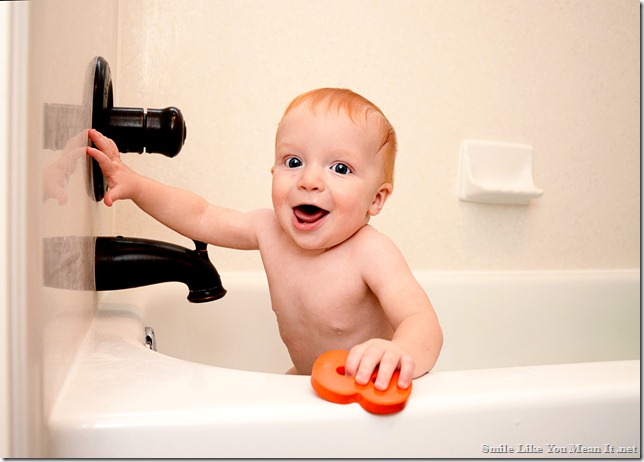 Self feeding is preferred to spoon feeding, but he has grown to love both.  He loves my veggie muffins.  I’ve altered the recipe to be even more veggie packed and healthy so I’ll have to get that recipe up here soon!  Pretty much the only thing he doesn’t like are green veggies—so we mix those with pears to get him to eat them.  He really loves yogurt too!  He also demands to drink from our water cups when we are holding him.  He loves taking sips from big cups.  He likes sippy cups too, but can’t figure them out yet. 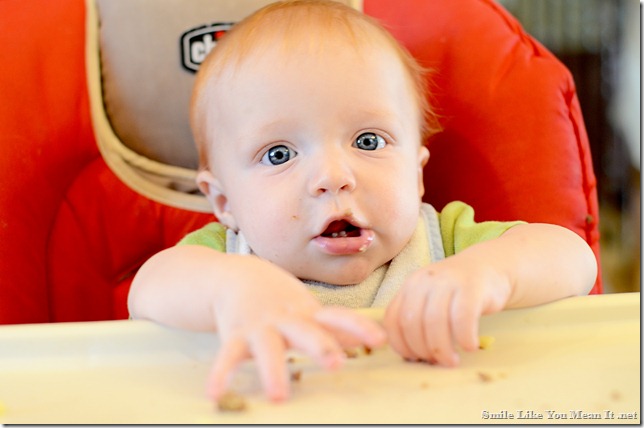 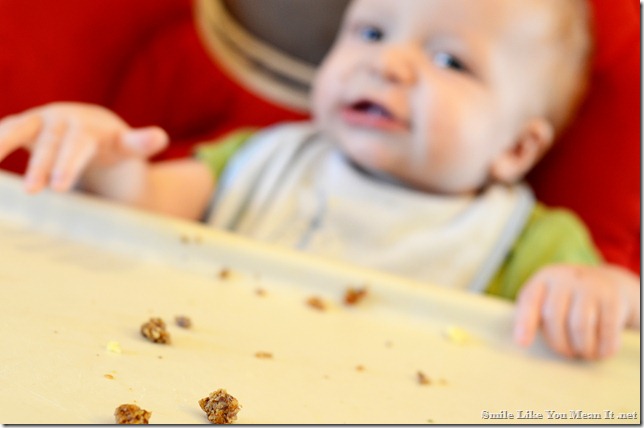 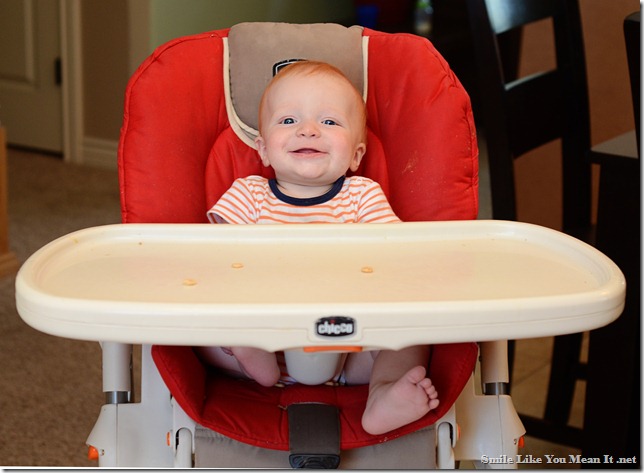 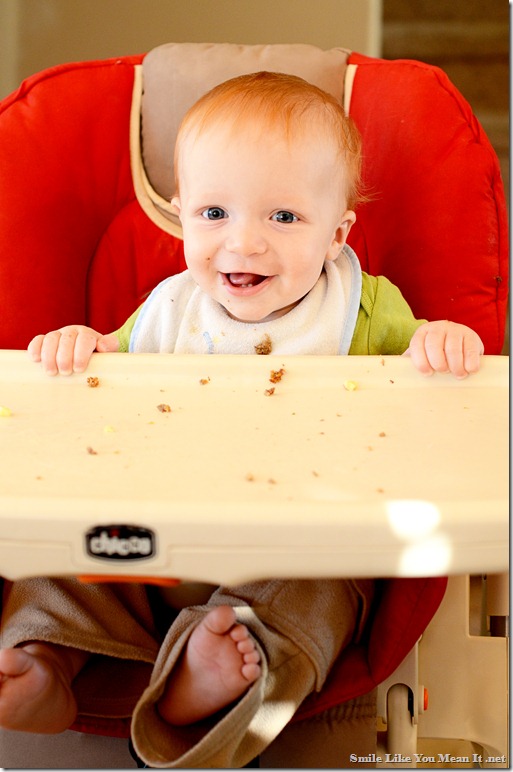 He’s loving daddy more and more.  He gets excited to see him in the morning and when he gets home from work.

He also loves to grab mommy’s hair.  He grabs it to use as his “blankie” to suck his thumb {weirdo} so I started giving him a little blankie at sleeping times to hold instead.  One of our favorite things is when he cuddles his head on our chest and sucks his thumb!  SO CUTE.

He goes exploring.  He will crawl to other rooms to see what’s down there.  He loves to follow Luke and play where he’s playing.  He crawls to other rooms and up the stairs to try and find mommy when I’m not around. 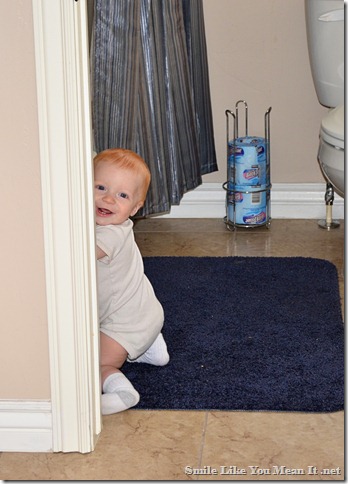 He plays well on his own with toys.  There’s lots around to explore and eat and play with so he can be entertained for a long time before he wants our attention again. 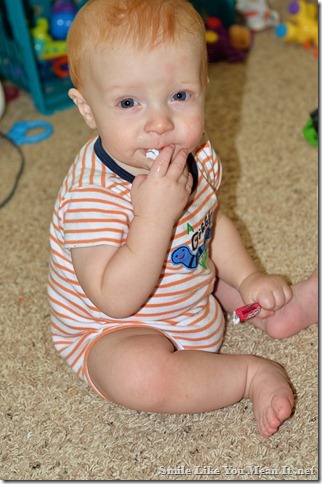 Someone needs to stop time, though, because this year is going too fast and I like Sam just the way he is right now!  He’s super cute and we tell him that hundred times a day!  We love this little redhead! 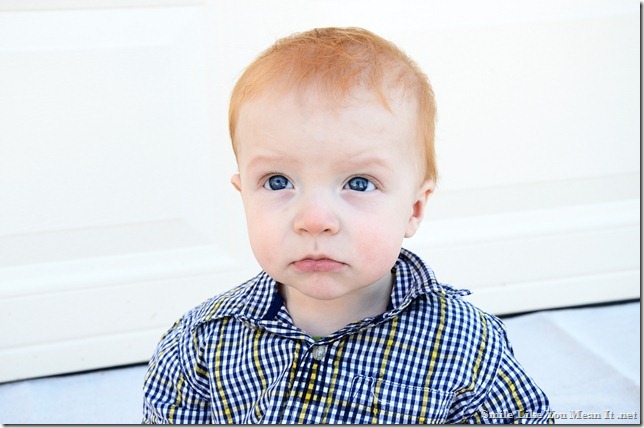