{in case you missed it, I put up a very late post about Sam at 5 months—click here read it!}

And the rest of me is SOBBING because my baby is growing up too fast!  I can’t believe it’s been half a year and each month just wizzes by!!  He just giggles at me when I tell him to “stop it!”

Loves to attack paper!  Crinkle it, chew it, slobber all over and destroy it.

Loves tags.  We have little monster plush toys about as big as Luke’s hand, and they have long tags coming off them.  Sam loves those tags the most, but any tag on any object will do.

Loves toys that squeak, toys that make music and noises, and he loves it when you bang an object on the table loudly (strange child)

Given up the binky and is now exclusively sucking his thumb.  He does like to chew on the soothie type binkies (like the one from the hospital) as toys because they are rubber…he loves rubbery things.

He actually lets out a yell when he is attacking a toy! (or you!)  Like in his own way he is saying “Attack!!” 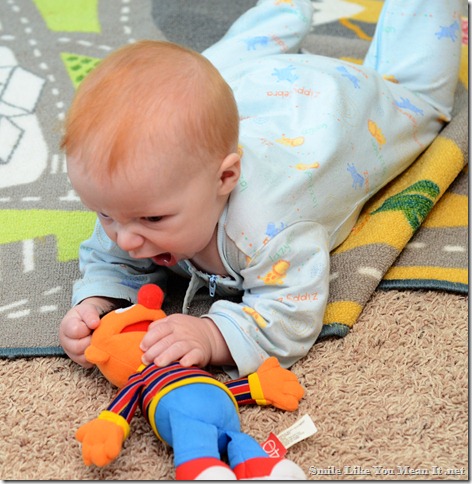 He still blows bubbles and makes raspberries and chews on his hands all the time.

He is now a grabber.  He grabs my chin, my nose, my hair (which is the worst!)  He also likes to grab your cup if you are taking a drink while holding him.  He’s pretty quick and has a strong grip!  I’ve lost a lot of hair recently!!

He can sit up with help for a minute or two, but he tends to fall too far forward (because he’s trying to eat his feet) or he occasionally throws himself backward.  He tries really hard to sit up when he’s slightly reclined (like when he’s drinking his bottle).  But he hasn’t quite got it down yet.

He is a full blown CRAWLER.  He can get from point A to point B with no trouble and he is getting faster!  He uses his left arm and his right leg to pull & push his way forward.  He pivots around on his tummy with ease, so he pretty much can go wherever he wants to…and he does.  He recently started following me into the kitchen from the living room (a fairly far distance for someone so small!!)  He often gets stuck under the dining table.  He often will get up on his hands and knees, but all he does is rock back and forth.  He hasn’t figured out how to move them to get around yet. 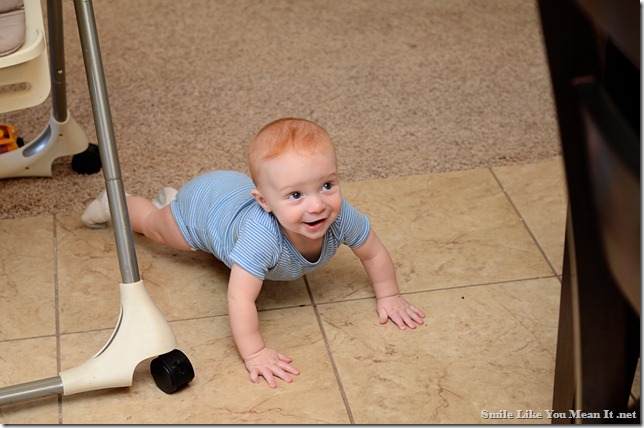 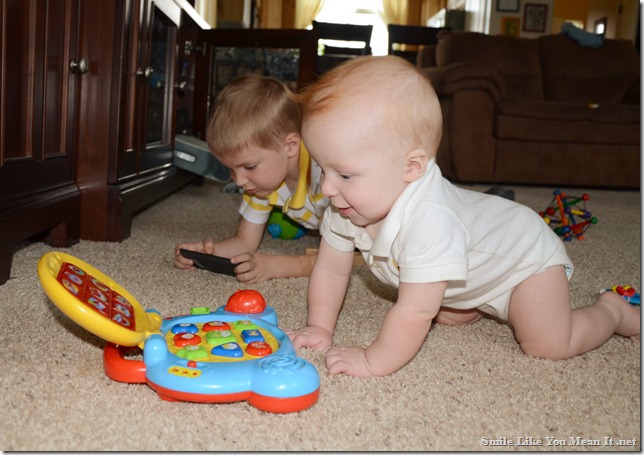 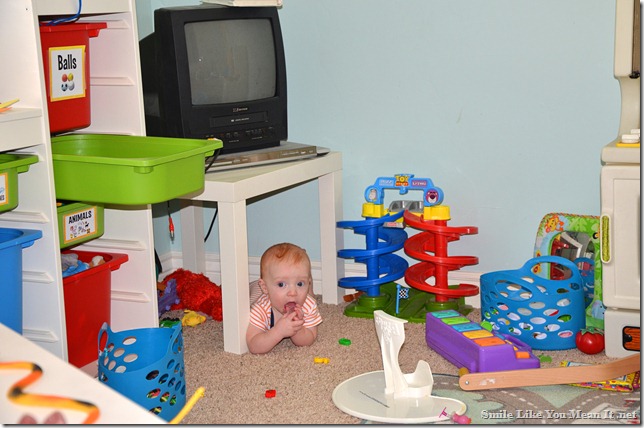 I started feeding Sam solid foods!  He hated rice cereal (so did Luke) so I mostly give him Oatmeal.  But he really isn’t convinced that he likes it even though I keep feeding it to him.  I can usually feed him a good amount of it before he avoids the spoon…rice cereal never made it past the first bite even after several days of trying. 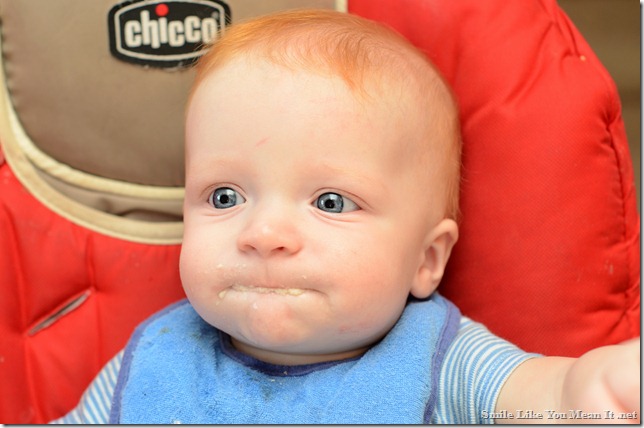 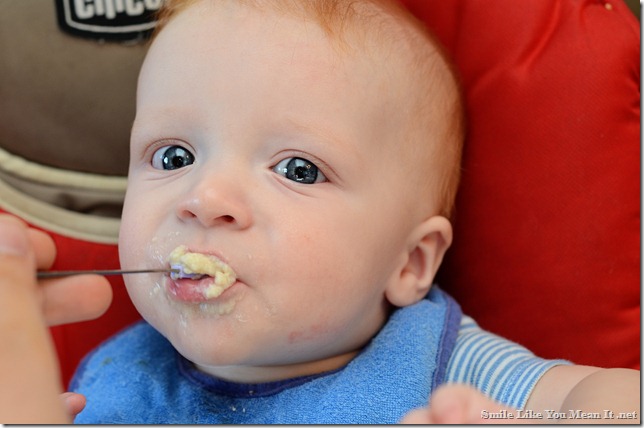 Sam’s first haircut was buzzing off his baby mullet.  His bald spots are filling in nicely too since he is primarily sleeping on his tummy. 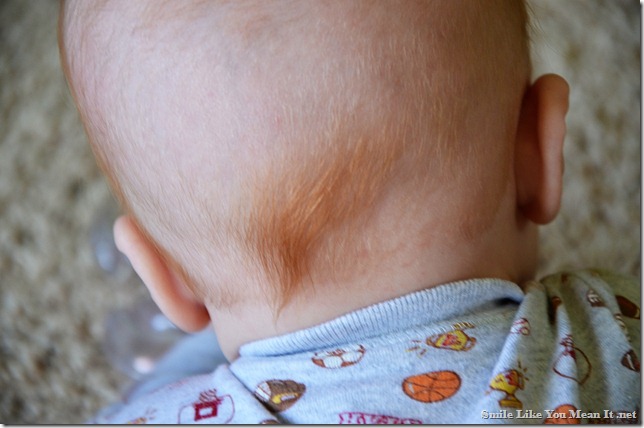 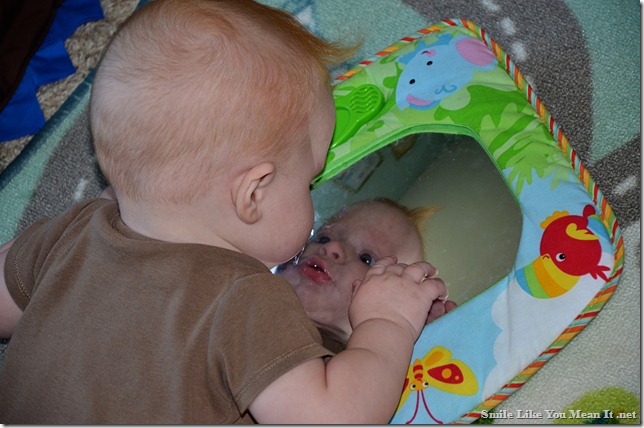 He likes to chew on shoes.  which is totally disgusting. 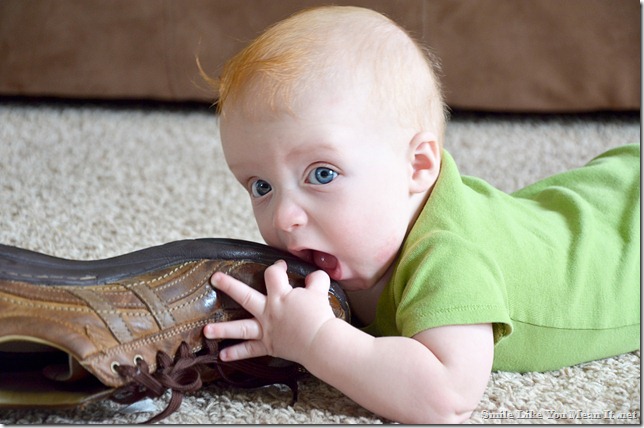 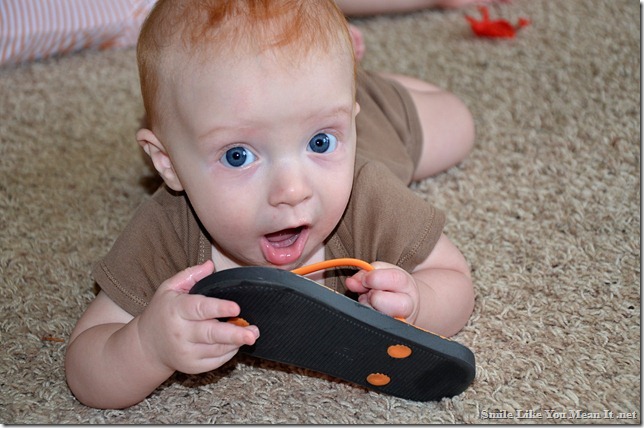 SUCH a wiggle worm!  It’s really hard to change his diaper and his clothes because he is constantly trying to roll over and dive off the changing table! 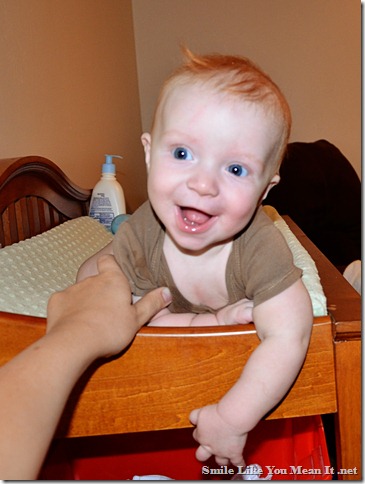 He has learned to kick and splash during bath time! Which means I’m getting completely soaked too!

He is easy to make laugh (even Luke can do it just by being silly).  He is also super ticklish—especially if you blow and kiss his ears and neck!

Too big for the swing.  We had to finally take it down because he kept crawling under it and banging his head…which he was not a fan of. 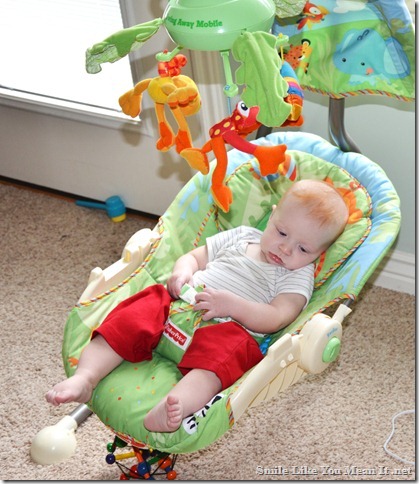 munching on his lips—my favorite little face he makes 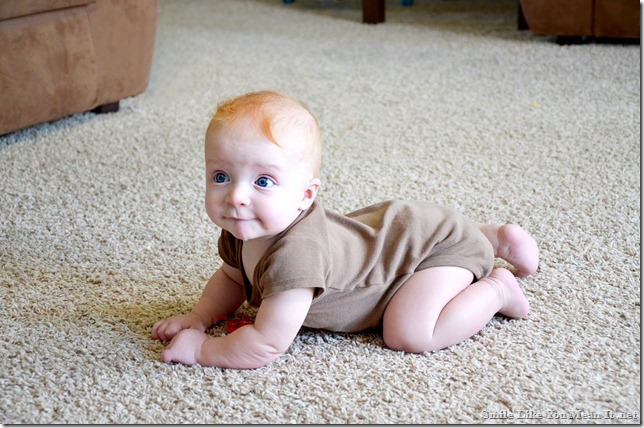 fascinated with the little animal pictures 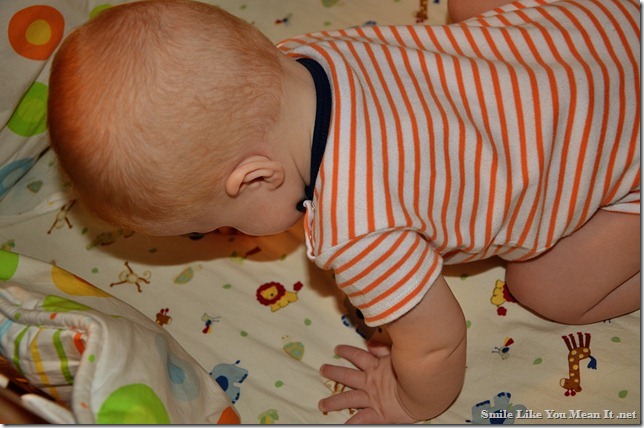 He always greets us with a smile and tries to crawl out of his crib after he wakes up! 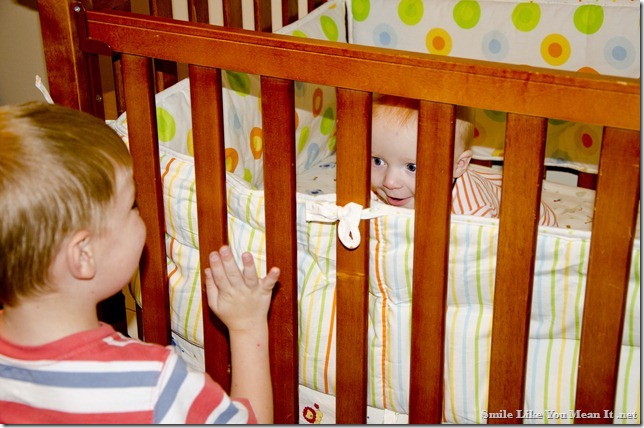 Phew!  I think that’s it!  We LOVE having Sam around!  I’m so sad this year is going so fast!