Sam is One Month

{Well, now he is one month and one week…time definitely gets away from me more easily lately!  It’s taken over a week to take and then edit and then write this post to mark Sam’s one month mark!} 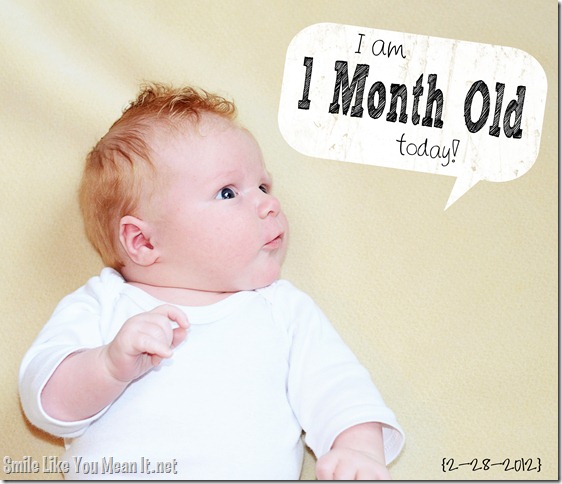 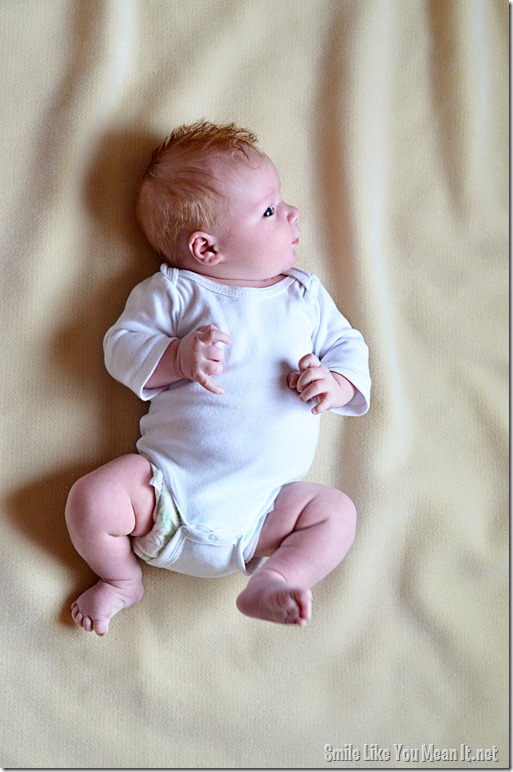 Eyes are still a little dark, but they are definitely going to be blue like mama’s eyes! 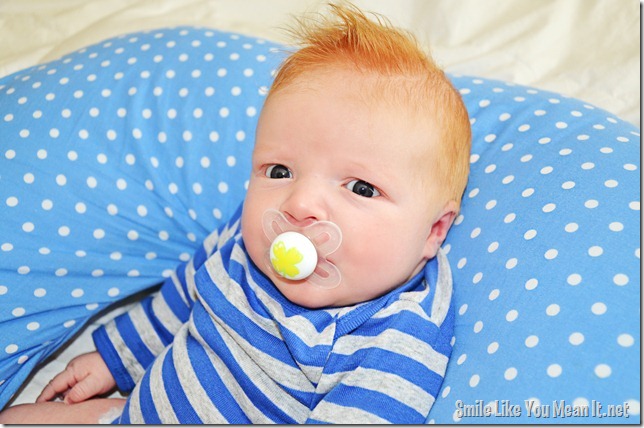 And the red hair is here to stay—in fact I am thinking he already needs a haircut since it’s over 2 inches long!  It’s also quite curly when we get it wet!  This chair had a lot of built up static electricity—showing just how long his hair has gotten! 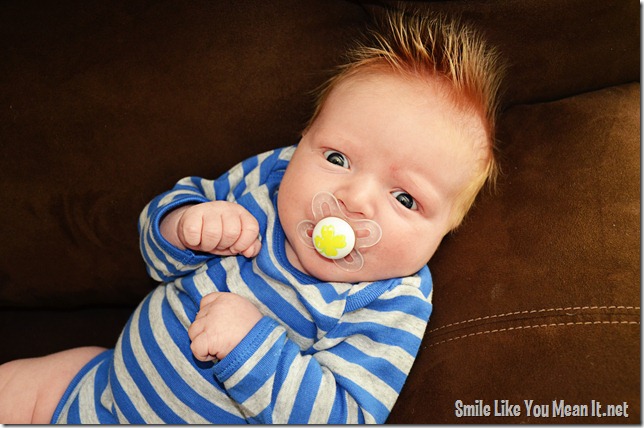 Sam LOVES staring at these blinds and also at any ceiling fan!  He will just stare and stare at them!  Look how big he looks in this picture!  He pushing 12 lbs now I think!  He’s outgrown 2 of my favorite 3-mo. size shirts for him already!  He’s also in size 2 diapers already! 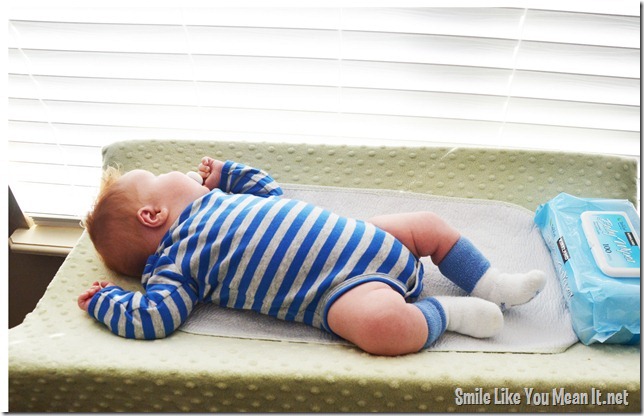 Big brother, Luke, LOVES baby Sam.  Maybe a bit too much.  He gives him too many kisses—and we have to tell him to stop.  He likes to tell me when “its” crying (he means to say “he’s”)  or “he’s happy” or “he’s waking up”.  He calls Sam a “polar bear” when he is wearing this coverall because it has little ears on the hat!  Just yesterday Sam was sucking loudly on his pacifier and Luke called him a fish!  Too cute!  Luke is very much looking forward to being able to actually play with this little guy! 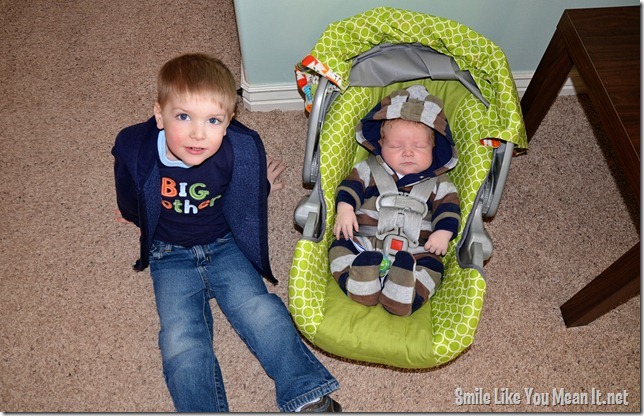 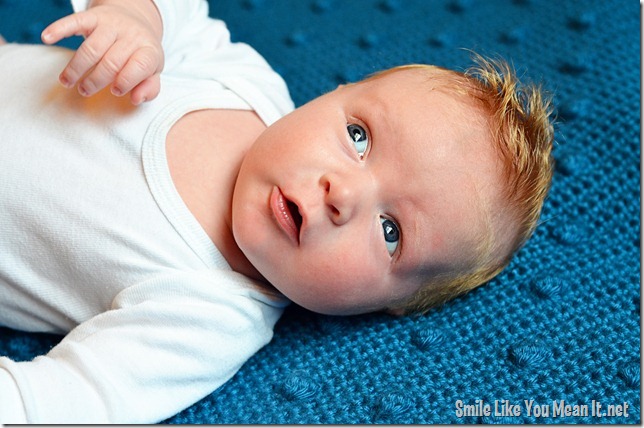 Likes his binky for now.  He sometimes gives me a “disgusted” look when I give it to him, but on the second try he usually wants it.  If he’s distressed, sleepy, or hungry he will always take it the first time. 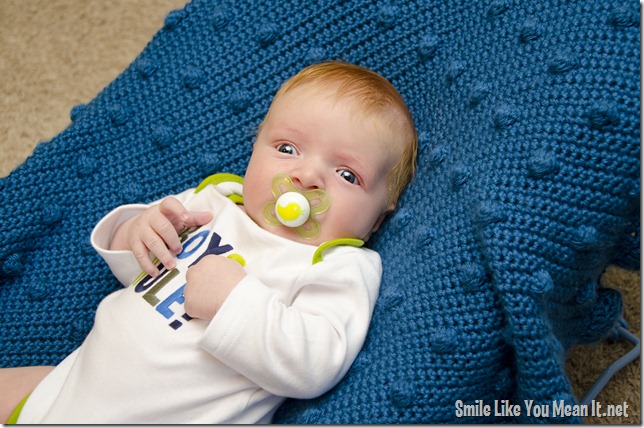 Sam is still working on regulating sleep, but occasionally I will get a four hour stretch at night!  He is all over the place with his sleeping during the day.

Sam is also a fast eater.  He’s often done within 10 minutes.  He needs an occasional bottle, though, to supplement (he is a big boy!).

We are still waiting for him to smile at us—something we are very much looking forward to! In the meantime, I have been trying to capture his frowny face—this isn’t really it, but I had to post it!  Does it make me a bad mom if I make my baby sit there and frown and cry while I try and catch a picture of it!?  Poor Baby!  It’s just so cute, I have to keep trying!! 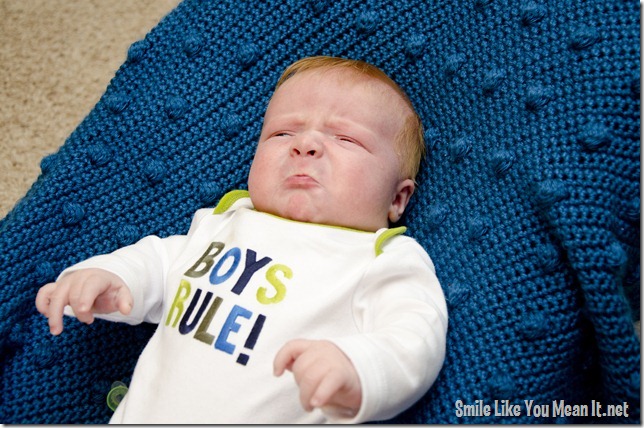 Those are just a few things about our little Sam!!

Email ThisBlogThis!Share to TwitterShare to FacebookShare to Pinterest
Catagories of Interest: baby, Sam