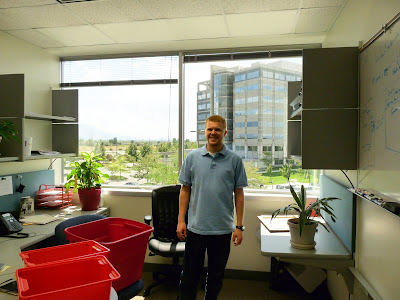 {cleaning out his office--it will be missed as he now has a cubicle!}

Originally called Cluster Resources, it was Scott's first job out of college and he's been there 3 1/2 years and grown to be very well respected there. It really is a great company and we were so blessed with such a great start to Scott's career straight out of college.

However over the last month, a new opportunity presented itself to us through our neighbor. Scott interviewed with Move Networks, a company closer to home, and was ultimately offered a great opportunity to make a change in employment.

Though A LOT of talking through it to each other, our parents and our neighbor who works there, praying more than we've ever prayed before, and a lot of consideration of all the variables, we ultimately decided to take this opportunity and change companies despite not the best timing. It was no easy choice and Adaptive really made it difficult with a pretty amazing counter offer!

Scott's started at Move Networks yesterday and it felt like I was sending him off to his first day of school (new clothes and all!!)) So far there are a lot of differences-including leaving for work a whole hour and a half later! But the future is looking bright and we're hoping this will be a great career move for him.

Email ThisBlogThis!Share to TwitterShare to FacebookShare to Pinterest
Catagories of Interest: FamiLy, Scott